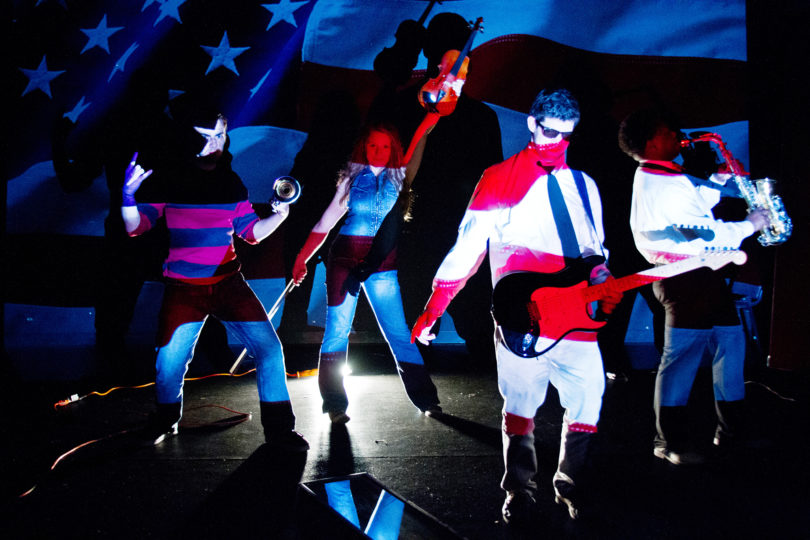 Charles Mee's "Under Construction" explores the controversial issues that define and deconstruct what it means to be American.

Athens, Ga. – The University of Georgia Theatre Studio Series will present Charles Mee’s “Under Construction,” a play that explores the controversial issues that define and deconstruct what it means to be American, March 21-23 and 26-28 at 8 p.m. in the Cellar Theatre with a matinee performance March 24 at 2:30 p.m.

“Under Construction” is part of American playwright and historian Charles Mee’s “the (re)making project,” an online resource that strives to rearticulate historical narratives via performance research. Mee’s project encourages directors to freely pillage his plays as he has “pillaged the structures and contents of Euripides and Brecht and stuff out of Soap Opera Digest,” engaging in a process of making and remaking challenging works of theatre.

Directed by C.A. Farris, a doctoral candidate in the department of theatre and film studies, this production of “Under Construction” incorporates original poetry, a women’s barbershop quartet, experimental movement and a medley of humorous and provocative scenes that explore historical and up-to-date questions about who and what constitutes the American public.

“America, the arts and especially theatre are constantly under construction,” Farris said. “This piece investigates why and how we define ourselves the way we do. It’s an inspiring work that that lets many silenced and strident voices to be heard.”

The play, he said, is as much about the audience and its own experience of the work as it is about the performance event itself.

Selected scenes from the piece include “The Woman Says,” a fragment that pays homage to performance artist Annie Sprinkle, a women’s sexual liberation activist; “Howl,” an étude referencing Alan Ginsburg’s poetry which centers around a “happening” of Beatnik-era poets; and “The Gathering,” a collaborative installation piece with the audience echoing the work of the late Jason Rhoades. The piece also incorporates the archetypical American imagery of Norman Rockwell and music from the 1950s, along with études that explore the performers’ own conceptions of what it is to be American.

For more information, see http://drama.uga.edu/. This performance contains mature content and nudity and is not suitable for children. A talkback with the director is scheduled for March 22 after the show.

Tickets for “Under Construction” are $12 for the general public and $7 for students and may be purchased at http://www.drama.uga.edu/box-office, by phone at 706/542-4400, at the Performing Arts Center or the Tate Center ticket office or at the door before the performance.