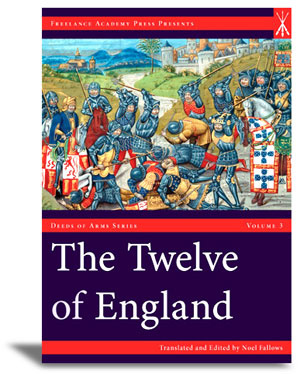 Noel Fallows, associate dean of international and multidisciplinary programs in the Franklin College of Arts and Sciences, has had the third in a series of books on medieval deeds of arms published.

The Twelve of England focuses on a medieval Portuguese Arthurian-style legend. The legend goes that in the late 1390s, a scandal broke out at the household of John of Gaunt, the Duke of Lancaster, when a group of 12 English knights insulted the 12 ladies-in-waiting of the duke’s wife. Outraged, the ladies sought redress, but not one Englishman would come to their defense. Desperate, the duke appealed to his son-in-law, King João I of Portugal.

Enter the “Twelve of England,” a team of Portuguese knights who travel to England to fight for the ladies’ honor. Fallows argues their story is a fictional tale designed to celebrate Portugal’s independence and emergence.

The Twelve of England includes an introduction in which Fallows discusses the background of the text.