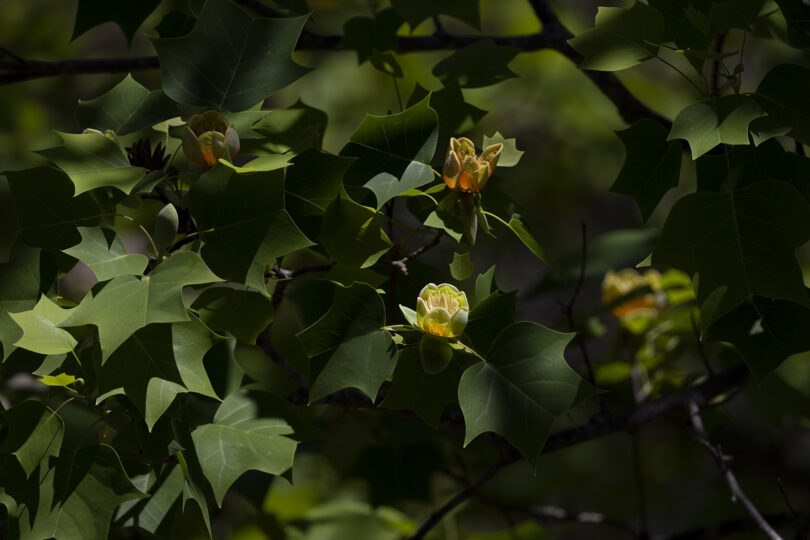 Blooms on a hybrid Liriodendron tree behind Coverdell. (Photo by Andrew Davis Tucker/UGA)

Among a cluster of leafy trees behind a building on the University of Georgia campus, a few stand a bit taller than the rest.

As this spring unfolded, the differences between the trees became even clearer. Their flowers bloomed into folds of yellow and orange, and their leaves unfolded larger than most adults’ hands. 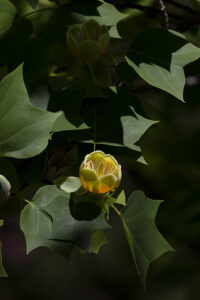 And this is one of the few places in the country where you can find them.

The trees are hybrids, a mixture of yellow poplar and Chinese tulip trees that were bred decades ago by tree scientists at the University of North Carolina at Chapel Hill and the UGA Warnell School of Forestry and Natural Resources (both yellow poplar and Chinese tulip tree are members of the magnolia family). At the time, crossing the two trees—distant relatives that have evolved on different continents—was part of an effort to grow a variety of hardwood trees for biomass production. While that effort never panned out, the mature specimens may prove their worth as a nice tree for residential yards and other landscapes.

“They have bigger leaves, they have nice flowers and they grow fast,” said Scott Merkle, a professor of forest biology at Warnell who first cloned the trees more than 20 years ago. “And so far, it likes growing here just fine.”

From crossing to cloning

The origin of the hybrid poplar trees started in North Carolina, where the late Clifford Parks, a research collaborator at the University of North Carolina, had a collection of Chinese tulip trees and yellow poplars. The scientists were interested in what a cross between the two species could create, as yellow poplar trees are hardy across the eastern portion of the United States and are a good source of wood, while Chinese tulip trees grow in mountainous areas in China and have similar traits. 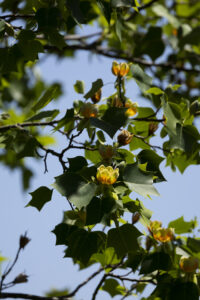 Detail of blooms on a hybrid Liriodendron tree behind Coverdell. (Photo by Andrew Davis Tucker/UGA)

But the yellow poplar cross never found its legs.

“Nobody has really taken advantage of these except the Chinese; they have hybridized yellow poplars with their own Chinese tulip trees, cloned them and commercialized them,” said Merkle. “They’ve done quite a lot with the hybrid trees, using the embryogenic cultures that we pioneered to produce the clones.”

What makes the trees grown by Merkle’s lab unique is how they came to be. In traditional tree reproduction, pollinated flowers produce seeds, which fall to the ground and germinate to produce a new tree. But after helping to cross-pollinate the trees in North Carolina, Wagner Vendrame in Merkle’s lab (now a professor at the University of Florida) collected immature seeds from the resulting fruit and brought them back to Athens.

From here, Merkle and his assistants created embryogenic clones—cultures created from the embryo of a seed—and germinated those into trees. The result is hundreds—potentially thousands—of plants cloned from the same seed. It’s an efficient way to create a generation of plants with the same characteristics.

“We started these cultures and a lot of them made really nice specimens. We were able to check the trees using DNA markers and they showed that the trees were hybrids,” added Merkle. Without the DNA evidence, they would have to wait years before seeing evidence of hybridization, such as the larger leaves or unusual flowers. “But we grew bunches of trees and actually planted them out in a variety of places, and they grew really well. They’re nice trees.”

But back when the trees were planted behind the Paul D. Coverdell Center on the Athens campus, nobody really knew how they might grow. In fact, there was never a plan to plant them in publicly accessible parts of campus until Merkle received a request from a former UGA administrator, Arnett Mace, who was dean of Warnell at the time. 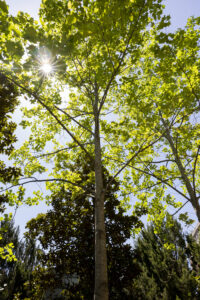 It was 2002 and Karen Holbrook was stepping down as UGA’s provost. Mace was tapped as her successor, and he wanted to plant something in her honor. Plans to build the Coverdell Center were in the works, and Mace asked Merkle if he had some unique trees that could be planted in front of the new building for Holbrook.

“He said, ‘I know you work with transgenic trees, and what I want to do is plant a pair of them on either side of the new Coverdell building entrance to honor Dr. Holbrook,’” recalled Merkle. But transgenic trees—trees that have been modified through genetic engineering—cannot be planted without a special permit. “So I said, ‘I don’t think we’ll be able to do that, but I do have these other unique trees produced by our lab.’”

Mace agreed, Merkle secured six trees and the building was constructed in 2006—but without the trees.

Eventually, after some dogged calls by Merkle, the trees were planted in a garden area behind the new building alongside traditional yellow poplars. Merkle would check in on them from time to time, and eventually began to see the differences—and improvements—among the hybrid trees.

“They grow like crazy—it’s been less than 20 years, and they’re about 50 feet tall. You can see the other yellow poplars—they’re much smaller,” said Merkle. The trees’ flowers are also brighter orange than those on yellow poplars or Chinese tulip trees, which are more green. “When they’re fully open they make a pretty open-cup shape.”

There are still some things to be learned from these trees before Merkle feels comfortable pursuing a commercial route—don’t go looking for them in your local garden store anytime soon. But so far, he’s excited about what he’s seen growing all these years, hidden in plain sight on campus.