University of Georgia professors Anumantha Kanthasamy, S. Edward Law and Scott NeSmith have been elected Fellows of the National Academy of Inventors. Including these three new fellows, 12 UGA faculty have received this honor, all of them since 2013.

NAI Fellows must be involved in creating or facilitating inventions that make a tangible impact on quality of life, economic development and welfare of society. Becoming an NAI Fellow is the highest professional distinction awarded solely to academic inventors. According to the organization, $3 trillion in revenue has been generated based on NAI Fellow discoveries. NAI Fellows’ research and entrepreneurship have resulted in more than 42,700 issued U.S. patents, 13,000 licensed technologies and 3,200 new companies—not to mention more than 1 million jobs created, according to NAI.

“As a National Academy of Inventors (NAI) director and Fellow, I am thrilled to welcome our newly elected Fellows to the NAI,” said Karen Burg, UGA vice president of research.

“Scott NeSmith, Ed Law and Anumantha Kanthasamy represent the breadth in application that exists across the UGA research enterprise,” Burg said. “Dr. Kanthasamy’s research has tremendous potential to bring new treatments and hope to those suffering from Parkinson’s disease; Dr. NeSmith’s work in developing new blueberry varieties helped establish Georgia as one of the leading U.S. states in blueberry production; and Dr. Law’s development of electrostatic spraying technologies boosted Georgia agriculture before being applied in other economic sectors—including to disinfect surfaces during the Covid-19 pandemic. Congratulations to Anumantha, Scott and Ed on this well-deserved recognition of their efforts in research and invention.” 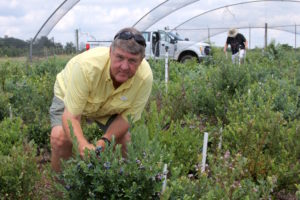 NeSmith is a horticulture professor on the UGA Griffin Campus and has been the head of the UGA blueberry breeding program since 1998. With NeSmith at the helm, the program has released 31 commercial varieties and nine ornamental varieties.

“It takes 10 to 12 years to produce a new blueberry variety,” NeSmith said. “UGA has one of the oldest blueberry breeding programs in the country, and our team has worked hard to build on that foundation. We were able to breed early maturing, southern highbush varieties suited for Georgia’s growing environment.”

Today, blueberries are the No. 1 fruit produced in the state. Georgia farmers raise over 18,000 acres, which produce 39 million pounds of blueberries valued at over $120 million. 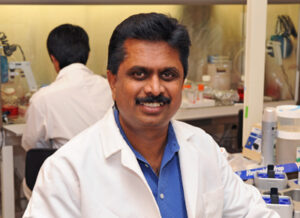 Kanthasamy is an internationally renowned researcher of Parkinson’s disease and related neurodegenerative disorders. As the first John H. “Johnny” Isakson Chair and Georgia Research Alliance Eminent Scholar in Parkinson’s Research, his work ranges from neurological science to identifying biomarkers for the early detection of Parkinson’s. Kanthasamy has founded two startup companies, PK Biosciences and Probiome Therapeutics, to facilitate the commercialization of drug candidates and biomarkers that have emerged from his research.

“I am truly honored by this special recognition for our innovative translational research on neurodegenerative diseases,” Kanthasamy said. “It is quite humbling to be allied with the cadre of extraordinary innovators and inventors elected to the NAI.”

Before coming to UGA, Kanthasamy served as director of the Iowa Center for Advanced Neurotoxicology, where he and his research team study the underlying molecular and cellular mechanisms involved in the neural degeneration caused by Parkinson’s and other diseases. 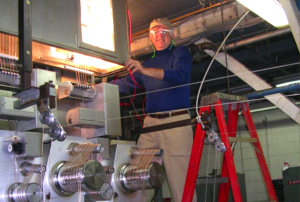 Law is a D.W. Brooks Distinguished Professor Emeritus in UGA’s College of Engineering and was elected to the National Academy of Engineering in 1996. He began researching the effect of static charges on chemicals, or electrostatics, at North Carolina State University under Henry Bowen in the 1960s. Inspired by Rachel Carson’s classic ecology book, “Silent Spring,” Law began studying how to apply an electrical charge to pesticide as it was sprayed on crops in order to reduce the amount of chemicals needed.

“I give major credit to Henry for the start of the idea,” Law said. “He was working on a way to reduce the impact of chemicals that were necessary but environmentally so harmful. After studying under him, I was fortunate to work with people like Ken Giles, Steve Cooper and Brett Therman, who all had a significant impact on electrostatics.”

Law’s research has led to better electrostatic spraying technology that has been applied in a wide range of functions because of its ability to make sprayed chemicals stick to things. Sprayer nozzles for tractors that make herbicide cling to plants and reduce runoff have been brought to market and used in the cotton industry. This technology has been also applied to sprayable paints, spray tan machines and a line of disinfecting sprayers that were essential in fighting the pandemic.

Kanthasamy, Law and NeSmith—along with 161 other new NAI Fellows—will be inducted at the NAI Annual Meeting on June 13, 2022, in Phoenix, Arizona. Drew Hirshfeld, the Under Secretary of Commerce for Intellectual Property of the United States Patent and Trademark Office, will provide the keynote address at the event.

“Having three faculty members elected to the National Academy of Inventors in a single year highlights the extraordinary impact of the University of Georgia’s growing research and innovation ecosystem,” said S. Jack Hu, the university’s senior vice president for academic affairs and provost. “As an institution, we are committed to leveraging the expertise of our talented and dedicated faculty for the benefit of society.”