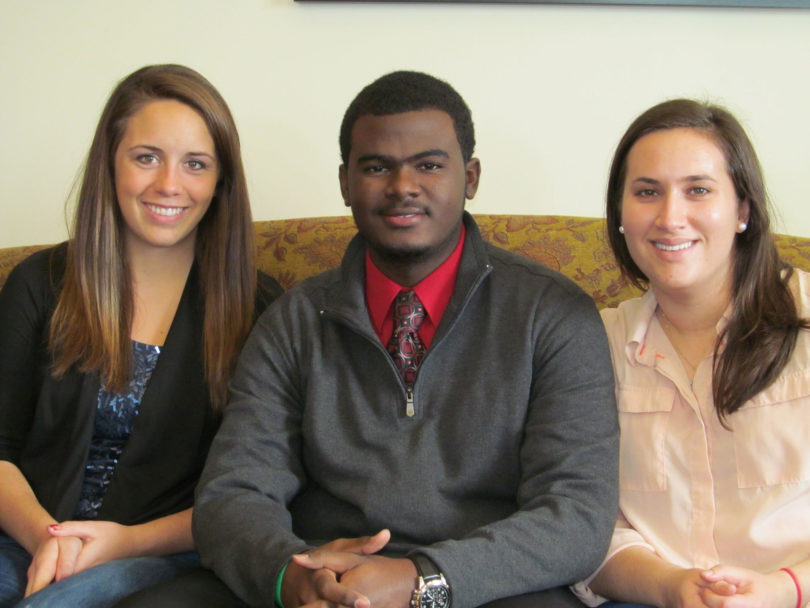 “I am very pleased to welcome Maria, Allison and Camir to the Foundation Fellowship,” said David S. Williams, associate provost and director of UGA’s Honors Program and Foundation Fellows Program. “They all have a remarkable and impressive record of academic achievement, leadership, and service. As a group, they are sure to enrich the community of Fellows.”

Honors students entering their third semester at UGA must have a minimum cumulative GPA of 3.85 to compete for the scholarship, which provides financial assistance during the last two years of undergraduate study at UGA. The award provides additional funding for travel-study, research and academic conference attendance.

Cox plans to use some of her scholarship money this summer to attend the Cannes Film Festival Study Abroad program offered through the Grady College of Journalism and Mass Communication. Cox presented a one-time colloquium in January sponsored by UGA’s Jane and Harry Willson Center for Humanities and Arts called, “The Various Changes in Peter Pan and its Reception by Audiences Over Time.” She will further discuss this research at the annual Center for Undergraduate Research Opportunities symposium on April 1. “The most important part of the Fellowship to me is the opportunity to join its community of scholars,” Cox said.

In March 2012, Cox volunteered through one of UGA’s alternative spring break programs to help children with illnesses and disabilities in Orlando, Fla. This spring she is travelling to Pembroke, N.C., to raise awareness for Native American struggles and issues. Cox has been named a Hutchinson CURO Honors Scholar, a One UGA Scholar and a Zell B. Miller Scholar. Through the Fellowship, she plans to complete a future internship in Los Angeles, where she hopes to make a living as a television scriptwriter and manager working on dramas.

Koch plans to use the Fellowship to pursue research on how humans, particularly those living in Neotropical countries, are impacted by their cultural and physical environments. She will begin exploring this topic this summer when she studies abroad in Panama. In fall 2013, she will study tropical ecosystems at UGA’s Costa Rica campus. She completed an internship in UGA’s anthropology department in spring 2011. In summer 2012, she taught English in Indonesia through the Global Ednovation program. Koch has studied Spanish, German, Portuguese and Indonesian.

Last year, Koch traveled to Charleston, S.C. to volunteer with oyster restoration and aid a local food bank. She already has been recognized for her achievements by being named a Bernard Ramsey Scholar through the Honors Program. With her minor in ecology, Koch has her eyes on a job at National Geographic as an explorer, researcher, cultural correspondent or excursion leader. “It will be good to be a part of a group driven in so many areas, including travel, academics and research,” said Koch of the Fellows community. “It is such a high honor to be able to uphold these standards and represent the university.”

Ricketts plans to meld frontline techniques from the fields of bioinformatics and biology to determine how to apply nanotechnology in medicine. Ricketts, who is minoring in computer science, will begin a CURO research project in fall 2013. With support from the Foundation Fellowship, he plans to study at Oxford University in England. “The Fellowship will allow me more freedom to pursue my academic goals,” Ricketts said.

Before coming to UGA, Ricketts participated in the Generating Genius Program sponsored by the University of the West Indies in Kingston, Jamaica. Now in his second year at UGA, Ricketts leads chemistry study groups on campus and volunteers through the UGA Rotaract Club. He assists with projects at the Morningside Retirement Home, local food banks and has helped with public road cleanups. He remains involved in his hometown community. He recently designed identification cards for students at Eagles Wings Elementary School so the school could save money spent on hiring an outside graphic designer. Ricketts explained that his Foundation Fellowship not only help his scholarly pursuits, but also his brother’s. “I am also very excited for my younger brother, who also wants to go to college in the United States,” he said. “Being a Fellow means I will not be such a burden on my parents, and he can study here too.”

The Foundation Fellows Program was established in 1972 by the trustees of the University of Georgia Foundation to provide an enhanced educational experience for academically outstanding undergraduate students.

For more information, see http://www.uga.edu/honors/ and click on Foundation Fellows.