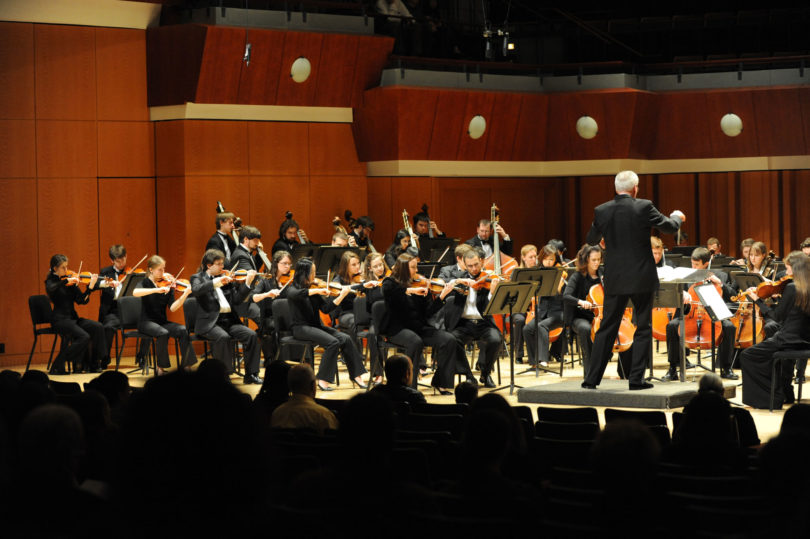 The UGA Symphony Orchestra will give a concert Sept. 8 at 8 p.m. in Hodgson Hall. The performance of American Classics will include pieces by Leonard Bernstein and Charles Griffes.

The UGA Symphony Orchestra will begin its season with a concert in the Hugh Hodgson School of Music’s premier concert series, the Thursday Scholarship Series, Sept. 8 at 7:30 p.m. in Hodgson Concert Hall.

The orchestra’s program will include unique and storied works from Gioachino Rossini, Manuel de Falla and Dmitri Shostakovich.

“This is not your ordinary ‘overture, concerto and a symphony’ program,” said Mark Cedel, director of the UGASO.

The program will open with the overture to Rossini’s opera La Gazza Ladra, or The Thieving Magpie, a popular piece with a fanciful legend: It is said that the producer of the opera, before the first performance, locked Rossini in a room to assure the composition of the overture and that Rossini dropped each completed page out of the room’s window to his copyists below.

The next piece on the program, “Nuits dans les jardins d’Espagne,” or “Nights in the Gardens of Spain,” by de Falla, refers to the Hispano-Arabic past of de Falla’s native al-Andalus and depicts three gardens in the region.

Originally devised for solo piano, de Falla decided to turn it into a piece for piano and orchestra. Martha Thomas, UGA’s Despy Karlas Professor in Piano at the School of Music, will be the piano soloist for the performance.

“The de Falla, while not a true concerto, is in the standard three-movement format,” said Cedel. “Virtuosic for the piano, it demands a wide palette of colors from both the soloist and orchestra.”

Thomas said that part of what makes this piece unique is how it uses the pianist as both soloist and orchestral player, with piano writing that often imitates guitar and requires techniques rarely found in the traditional piano repertoire.

The final piece is Shostakovich’s Symphony No. 10, a work notable for its quality but also for its attachment to a popular superstition.

“Shostakovich stands tall in his 10th symphony,” said Cedel. “He breaks the stigma that, after Beethoven, no one should compose more that nine symphonies.”

Often referred to as the “curse of the ninth,” a belief exists that any composer’s ninth symphony is fated to be the composer’s last. However, while well-known composers like Beethoven and Ralph Vaughan Williams are said to have been subject to this curse, many can be found who produced well beyond nine symphonies, so the belief is widely held to be little more than a curiosity.

Still, with words like composer Arnold Schoenberg’s, “Those who have written a Ninth stood too close to the hereafter,” some level of mystery persists, adding another layer to the UGASO’s September concert.

Tickets are available at pac.uga.edu or the PAC box office for $20 or $6 with a UGA student ID.

The UGA Hugh Hodgson School of Music sponsors more than 350 performances each year. To view the performance calendar, to subscribe to the weekly email concert listing or learn more about the School of Music, visit music.uga.edu.