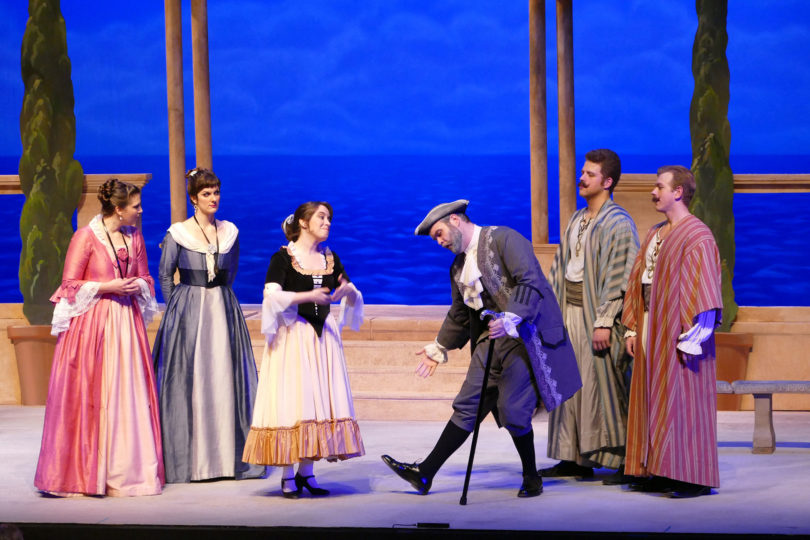 The Opera Theatre will join with the UGA Symphony Orchestra to perform these opera masterpieces, semi-staged with English supertitles. This is the first time the Hugh Hodgson School of Music’s opera ensemble has performed two operas for its major fall production.

“Being able to bring these delightful masterpieces to our students and audiences is extremely gratifying and a project I have hoped to present for the past 10 years of my tenure here at UGA,” said Frederick Burchinal, the Wyatt and Margaret Anderson Professor of the Arts at the School of Music and director of the UGA Opera Theatre.

“The Impresario,” or “Der Schauspieldirektor,” leads off the production, taking aim at theater culture with a story about a frustrated theater manager, an equally frustrated but hopeful nonsinging singer and a wealthy “benefactor” whose only real interest in the theater is to promote his two recent love conquests.

“What makes this even more amusing is the awareness that from the 1750s to today, nothing has really changed in the theater/opera world,” said Burchinal.

Following intermission, the Opera Theatre performs Puccini’s “Gianni Schicchi,” which Burchinal said “is, without question, one of the greatest comic operas ever written.” Originally devised as one of three one-act operas to be performed together, “Gianni Schicchi” uses Dante’s “Inferno” and actual historic figures to create an enduring, hour-long amusement that takes a comic look at family intrigue, deception and love.

“ ‘Gianni Schicchi’ has been one of my personal favorites as a character to play and an opera to enjoy throughout my entire career as an opera professional, and this performance is a rare opportunity for our audience to see this masterpiece brought to life with our excellent singing actors,” said Burchinal.

Those interested in an in-depth look at the production can attend a pre-performance lecture at 6 p.m. before the Oct. 21 performance. An RSVP sent to semery@uga.edu is required for this pre-concert event.

The Oct. 21 performance will be streamed live for internet audiences via the School of Music’s website music.uga.edu/streaming.