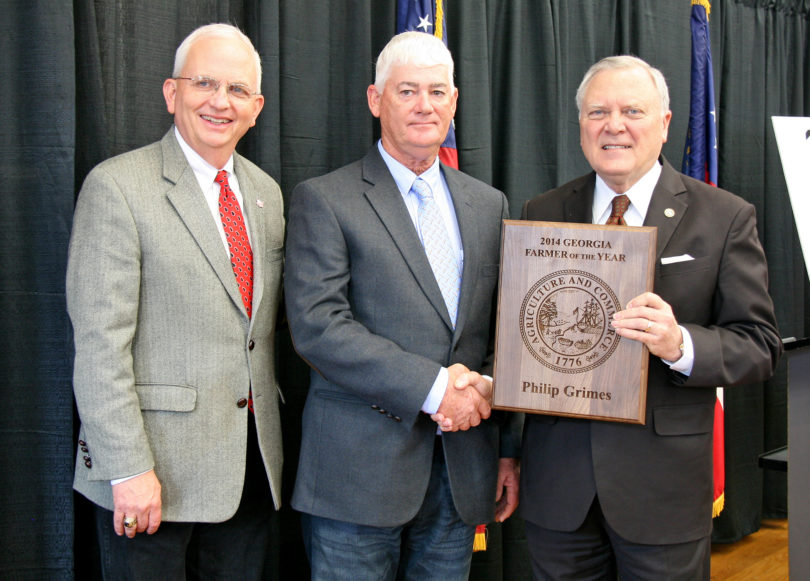 Atlanta, Ga. – Philip Grimes of Tift County has been named Georgia’s Farmer of the Year in recognition of his innovative approach to maximizing production on his farm while prioritizing land conservation and farm legacy.

University of Georgia Extension helped organize the search for the state’s top farmer.

“The agricultural community has always been a top driver of economic growth here in Georgia, bringing innovation and job opportunities,” said Deal, who presented the award with Georgia Commissioner of Agriculture Gary Black. “Phillip Grimes epitomizes the strong spirit of Georgia’s farmers by feeding the nation as well as conserving our land for generations to come. I congratulate Phillip and thank him for his dedication to his profession and his contribution to Georgia’s economic future.”

Grimes will represent Georgia at the Sunbelt Ag Expo in October, where he will vie against eight other state winners for the title of Southeastern Farmer of the Year.

Agriculture remains the largest industry in Georgia with annual crop value of about $13.9 billion and a $76.9 billion impact on Georgia’s economy. While poultry and row crops are the most valuable commodities in Georgia, fruits and vegetables—like Grimes’ snap beans and cantaloupe—hold their own with $936 million in value.

Grimes operates Docia Farms in Tift County. While his accomplishments as a farmer are well documented—he has been a district or state winner for top peanut yields for 20 consecutive years—his leadership skills may have propelled him to the top, said Steve Brown, associate dean for UGA Extension who organized the search for Georgia’s Farmer of the Year.

“The winners are always leaders,” Brown said. “Other farmers look up to them and follow their lead on things. You don’t have to be a mega-farmer to win, but you have to have those leadership qualities.”

UGA Extension agent Brian Tankersley, who has worked closely with Grimes over the years, nominated him for the award.

UGA Extension programs have been an important part of the farm’s success, Grimes said.

“I listen to the experts and go to the meetings. They can tell you if a new product is coming out and what’s working and what’s not,” Grimes said. “They’re just an important part of farming now.”

As the Georgia winner of the Swisher Sweets/Sunbelt Expo award, Grimes will receive a $2,500 cash award and a trip to the Sunbelt Expo Ag Expo in Moultrie from Swisher International; a $500 gift certificate from the Southern States Cooperative; the choice of either $1,000 in PhytoGen cottonseed or a $500 donation to a designated charity from Dow AgroSciences and a Columbia vest from Ivey’s Outdoor and Farm Supply. He is now eligible for the $15,000 cash award that will go to the overall winner.

Swisher International and the Sunbelt Expo are sponsoring the Southeastern Farmer of the Year awards for the 24th consecutive year.

UGA Extension
Founded in 1914, UGA Extension is a cooperative effort by federal, state and local government partners administered by the University of Georgia. Through a network of specialists, agents and staff covering each county across the state, information is delivered across these areas both online and in person to the public in the forms of classes, workshops, events, online resources and publications. For more information about UGA Extension, see http://extension.uga.edu/ or call 1-800-Ask-UGA1.