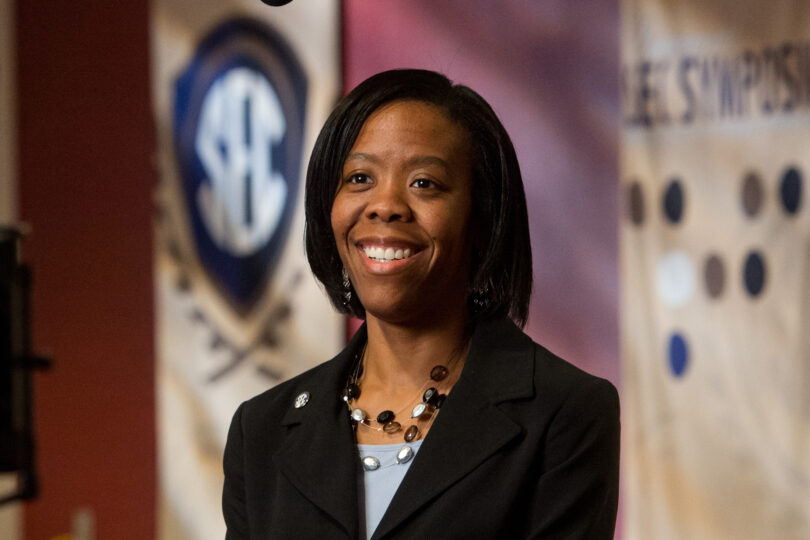 Torie Johnson EdD '17 is the associate commissioner of academic relations for the Southeastern Conference. Her division is charged with the teaching, research, and service accomplishments of students, faculty, and staff from SEC member schools. (Photo Special)

Torie Johnson was going to be a sportscaster. In fact, she wanted to anchor SportsCenter on ESPN.

She was on her way—becoming the first black editor of her school’s student newspaper; earning a degree in journalism from Baylor University; and interning in the field, including one position with the Houston Astros.

Then the Southeastern Conference came calling.

“I’m from Texas, and the SEC was fine and all, but coming to the SEC was not my dream come true,” says Johnson EdD ’17. The job that took her there? A position in compliance that she agonized over.

But she knew it was a foot in the door, a “tremendous opportunity” she just couldn’t pass up.

So she packed everything up and moved 600 miles from all her friends and family to Birmingham, Alabama, where the SEC is headquartered. And she’s been there ever since.

Johnson steadily worked her way up the ladder at the SEC, starting with that initial compliance job, then running the National Letter of Intent Program (before it moved to the NCAA), followed by years of facilitating championship events as a sport administrator. She also earned a master’s degree from the University of Alabama, Birmingham.

But then the SEC asked her to do something she never contemplated. The conference was adding an academic effort into the league office, and the leaders asked her to head it.

She accepted and decided to pursue a degree at an SEC institution that would help her understand the ins and outs of the world of higher education, something she was not at all familiar with at that point.

That desire led her to UGA’s Doctor of Education program in the Institute of Higher Education. And the program’s international component was particularly appealing since the SEC’s new academic initiative had a goal of enhancing study abroad opportunities for students.

Going to the Netherlands and China to learn more about their comparative education systems would be invaluable.

“I had never been on a study abroad as an undergraduate or graduate student,” she says. “So, for me, here was an opportunity to personally do the thing we are trying to support our students doing. Now when I visit with our senior international officers, I can speak from firsthand experience. I understand how that works now.”

The overall mission for her division is to highlight teaching, research, and service accomplishments of SEC students, faculty, and staff. Johnson and her team facilitate programs like the SEC Faculty Achievement Awards, a professional development program aimed at preparing future leaders in higher education, and a faculty travel program, among others.

As associate commissioner of academic relations for the conference, Johnson focuses on bridging academics and athletics, something that wasn’t really considered all that important a couple decades ago. But in conferences like the SEC, where sports are a huge part of university culture, Johnson says the connection is vital because, ultimately, student-athletes are at their universities to receive a quality education while also pursuing their athletic goals.

“I think there’s been some recognition over the last decade that the two entities can’t exist separately and be all that they can be, be as successful as they can be, at this level,” Johnson says. “There needs to be that close partnership. And that happens at Georgia, that happens at all of our SEC institutions.”