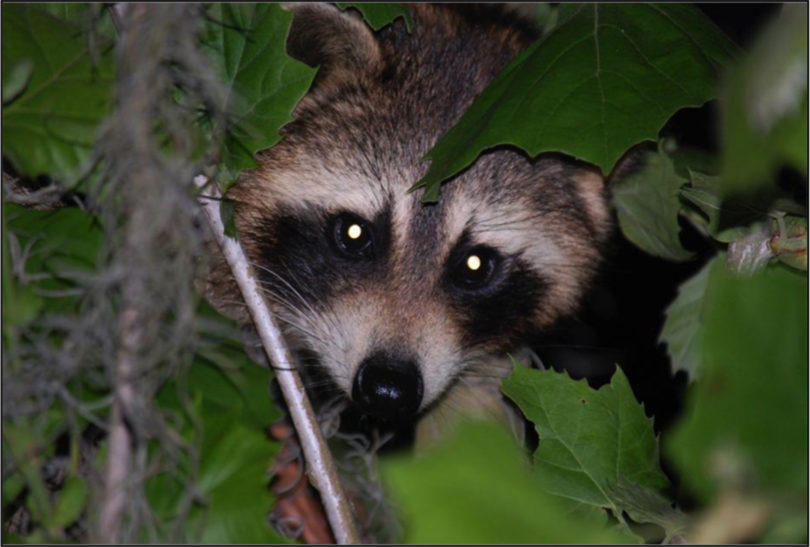 Researchers at the University of Georgia and University of Florida have shown that the toxic elements in coal ash accumulate in the livers of raccoons that forage for their food in and around ponds containing the waste. Credit: Felipe Hernández; UFL.

Aiken, S.C. – Coal-burning power plants produce more than half of the electricity in the U.S., and they generate huge amounts of coal ash in the process. One type of coal ash is a fine, powdery particle called fly ash, which for many years was treated as waste and disposed of in landfills.

Now, researchers at the University of Georgia and University of Florida have shown that the toxic elements in fly ash accumulate in the livers of raccoons that forage for their food in and around the ponds containing the waste. Researchers say the study findings can inform communities located near the remnants of coal waste about its potential dangers to public health and the ecosystem.

Coal ash is one of the largest types of industrial waste in the U.S., according to the Environmental Protection Agency. In 2012, 470 coal-fired electric utilities generated about 110 million tons of coal ash.

University of Florida doctoral student Felipe Hernández examined raccoons from two distinct habitats: one contaminated, and the other, uncontaminated, both located on the U.S. Department of Energy’s Savannah River Site. He worked with James Beasley, an assistant professor at UGA’s Savannah River Ecology Laboratory and Warnell School of Forestry and Natural Resources.

Beasley explained that the contaminated habitat surrounds five pond-like basins that are currently undergoing remediation, or environmental cleanup procedures, but received coal waste from 1953-2012. During that time, these impoundments discharged waste into the surrounding landscape.

Hernández suspected that there would be a direct connection between the coal fly ash and what they would find in the systems of the raccoons captured from the contaminated site.

“Arsenic, selenium and lead are trace elements that are normally present in these animals at low concentrations, but we found significantly higher concentrations of these elements in the liver of the raccoons from the contaminated site,” said Hernández. “Toxic concentrations of arsenic and lead can impact the central nervous, blood, cardiovascular, gastrointestinal, urinary and reproductive systems in wildlife.”

Hernández said trace elements become toxic at variable concentrations in different species, but the researchers warn that contaminants in raccoons can transfer to higher-level predators through the food chain and to humans who consume game meat.

“Our results found concentrations were 18 to 125 percent higher in the raccoons from the contaminated site,” he said.

Beasley said that the team also observed lower red and white blood cell counts in the raccoons. However, he noted, “the levels are not high enough to have substantial effects that would prove detrimental to the health of this particular population.”

“Elevated levels of these trace elements, particularly arsenic and selenium, have been previously observed and documented in a wide range of species in these habitats,” he said. “Our study is further evidence that these surface impoundments, or coal ash basins, can be a significant source of contaminant exposure for wildlife.”

The research team said its study also proves raccoons are an ideal species for studying uptake of environmental contaminants.

“They are abundant, have small home ranges and an omnivorous diet,” said Hernández. “Their uptake of the contaminant is therefore going to represent their exposure, including their dietary habits: consuming aquatic and terrestrial vertebrates, invertebrates and vegetation surrounding the ash basins.”

“As a terrestrial species, these raccoons are not living in the coal ash basins,” Beasley said. “Yet, their accumulation of contaminants reflects those found in the coal combustion waste. Most likely, they are using the impoundments as a source of food and water.”

The study, “Raccoons as Sentinels of Trace Element Contamination and Physiological Effect of Exposure to Coal Fly,” is available at http://link.springer.com/article/10.1007/s00244-016-0340-2.

Additional members on the collaboration include Samantha M. Wisely, School of Natural Resources and Environment, and Lisa Farina, Department of Infectious Diseases and Pathology, College of Veterinary Medicine, University of Florida; Ricki Oldenkamp and Sarah Webster, UGA Savannah River Ecology Laboratory and the Warnell School of Forestry and Natural Resources.