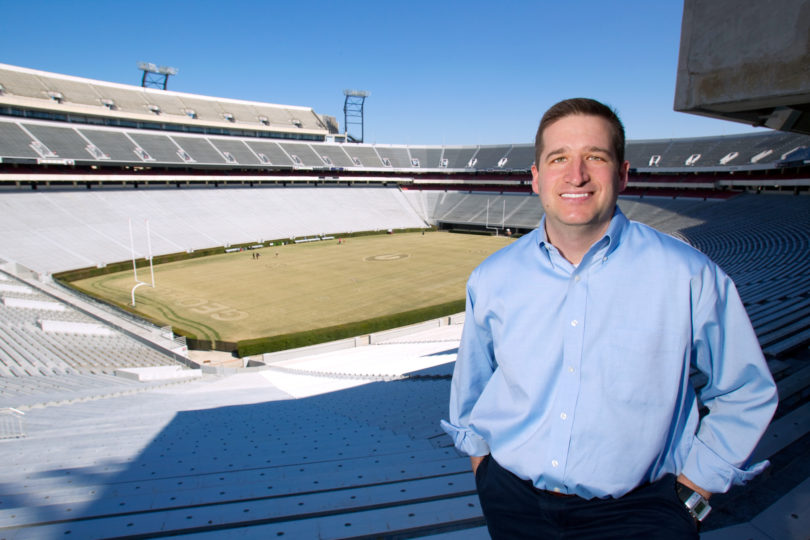 Less than a week after the April 6 G-Day football game, Sanford Stadium will be transformed into a concert venue for the first time in recent history.

The UGA Athletic Association will be following a familiar game plan for the concert.

“We’re handling it from a logistical standpoint like we would for a football game,” said Josh Brooks, assistant athletic director for internal operations. “Although we know it won’t be 90,000 fans, it’s going to be closer to 60,000 so that does make it a little easier in some regards.”

Most of Sanford Stadium seating will remain open, except for portions of the west end, which is where the stage will be located on the field level.

Brooks said having fewer people in the stadium, but using the same staff, will help make the event a success. Approximately 1,000 workers from bathroom attendants to police officers will be working before, during and after the concert.

“We are dealing with fans who may not come to Sanford Stadium a lot,” Brooks said. “We just want everybody, especially people who are here for the first time, to have a good time and enjoy the concert.”

The biggest change in using the stadium for a concert is that 5,000 fans will be on the field during the event. Brooks said the field itself will be covered with material similar to Teraplast, which will create a barrier to protect the grass.

“It’ll be similar to what they do for Commencement,” he said. “That’s where we got our blueprint from for that because they do such a good job.”

Brooks said the material won’t cause any damage to the field.

“Over the years, the technology used to protect the field has gotten better,” he said. “Just having it down for a few days doesn’t do it any harm.”

In addition to covering the field, two pathways will have to be created from the hedges on the west side of the field to give a wider egress for those 5,000 fans on the field.

Additional restrooms and concession stands also will be set up at the field level to provide concertgoers with easier access to those facilities.

Brooks said there will be extra security to prevent damage to the hedges, and he feels confident in the extra measures being taken.

“People usually are respectful and they understand not to damage them,” he said, “But there’s always one or two who want to pinch a little twig off the hedges and that happens. It goes through normal wear and tear during football season anyway.”

Brooks does not foresee any major issues with the concert, but says the biggest problem will be informing concertgoers ahead of time.

“The hope I have is that people who are not familiar with our campus will look at the map in advance and realize ‘If I’m sitting in section 104-105, maybe I should enter in Gate 2,'” Brooks said. “Things like that or knowing how far your parking spot is from the stadium and knowing how to get off campus will help a lot.”

Traffic and parking also will be different from home football games, Brooks said.

“With a football game, unless it’s a last-second thriller, fans are going to start trickling out in the third or fourth quarter,” he said. “We know going in to the concert the fans are staying until the encore and then you’re going to have 60,000 people leave at once.”

The university also is selling parking for the event. Fans can buy a reserved parking space within the specified purchased zone for the day of the concert. Parking on campus, as well as the surrounding Athens area, will be extremely limited on the day of the concert. Purchase campus permits online at www.events.uga.edu. For more information, contact Parking Services at parking@uga.edu or call 706-542-7275.

Brooks said this event’s success could have an impact on any decisions about future concerts at the stadium.

“We just want this to be a positive thing for the university, for the city of Athens, for the region,” he said. “In these economic times, we know anything we can do from an extra home game to a concert can help.”