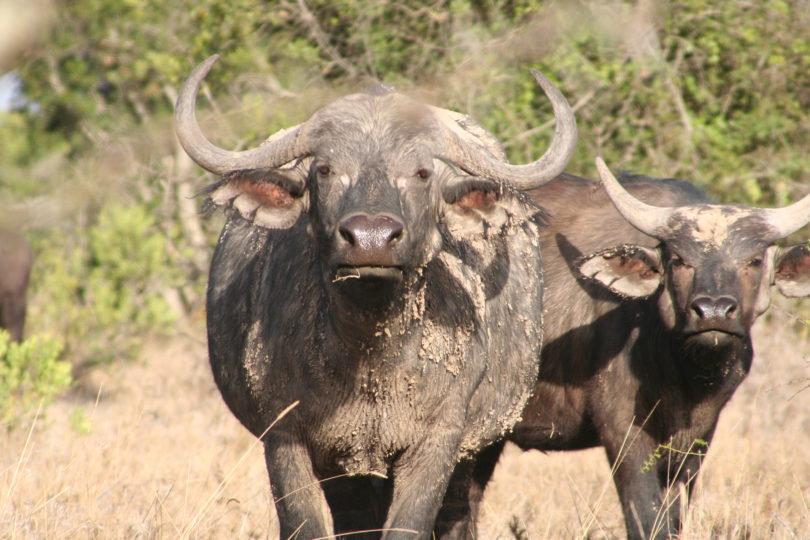 A female African buffalo with her juvenile eyes the researchers who were testing the herd for tuberculosis. (Credit: Vanessa Ezenwa/University of Georgia)

Athens, Ga. – Parasitic worms, which infect millions of people and animals around the world, have been shown to influence how the immune system responds to diseases like HIV and tuberculosis. In a new study of African buffalo, University of Georgia ecologist Vanessa Ezenwa found that de-worming drastically improved an animal’s chances of surviving bovine tuberculosis—but with the consequence of increasing the spread of tuberculosis in the population.

The findings, published in Science on Jan. 9, have implications for human health.

“If you think about humans in this context, this is what we’d like to do—to figure out how to help people who get infected by something to live longer and be less sick,” Ezenwa said. “But here we found that doing exactly that can have unanticipated consequences.”

In 2008, with the assistance of the park’s Veterinary Wildlife Services Department, they captured 216 African buffalo and tested them for parasitic worms, known as helminths, and for bovine TB. Half of the buffalo received treatment for helminths; the rest were left untreated as a control group. For the next four years, they recaptured and retested each buffalo approximately once every six months.

They found that animals treated for worms were nine times more likely to survive TB infections than untreated animals; with the worms gone, their immune systems were able to mount a stronger defense against TB. According to Ezenwa, this finding confirmed predictions about the effects of worms on the immune system based on an earlier study of TB and helminth infections in African buffalo.

“We’d done a one-off, short-term experiment to see if we could replicate, in this wild animal, the immunological results seen in laboratory experiments treating helminths in mice,” she said. “That led to this larger experiment in a much bigger population over a longer time.”

“We expected it would be a net positive for the individual and for the population,” she said. “But in fact when you carry out an experiment at this larger scale, in a real population, you see it’s not all positive outcomes.”

The improved survival rate allows infected buffalo to continue to spread TB within the herd, Ezenwa said. Since they still get infected at the same rate, there is an unexpected negative result for the population as a whole.

“Because coinfection is such a complicated area, laboratory studies are really essential in telling us about the detailed mechanisms of how immunological interactions work,” she said. “But we will never understand the real implications if all the work concentrates in the lab.”

John Gittleman, dean of the Odum School, said that the findings underscore the general importance of ecology for understanding infectious diseases.

“Studies such as this reveal an increasingly proactive approach to predicting factors that contribute to disease spread before it’s too late,” he said. “The high-profile nature of these findings show that by adopting a broad ecological perspective we can enhance disease control and prevention efforts.”

“African buffalo are long-lived, they’re living in the wild in social groups, they’re genetically variable-that’s a little bit closer to people than laboratory mice, which have the same genetic background and live under artificial conditions,” she said.

And understanding bovine TB-helminth coinfection in African buffalo is particularly relevant for human health because helminths are known to influence human immune responses to TB.

“The number of human cases of bovine TB worldwide is unknown, but where studied, it appears to be a substantial fraction of the total TB cases,” said Frederick Quinn, head of the department of infectious diseases in the College of Veterinary Medicine. “It also is unknown if bovine TB bacteria transmit more efficiently than other TB bacteria, what traits this pathogen possesses that allows infection of so many different species of mammals or what happens when the host is co-infected with parasites or HIV. Dr. Ezenwa’s work is a tremendous start in answering some of the fundamental questions about this disease and how best to control it in animal and human populations.”

“Public health interventions can sometimes have unexpected and unwelcome outcomes,” said Sam Scheiner, National Science Foundation program director for the NSF-National Institutes of Health-USDA Ecology and Evolution of Infectious Diseases Program, which funded the research. “By examining such outcomes, we can design better intervention strategies for infectious diseases.”

For more information about the Odum School of Ecology, see www.ecology.uga.edu. For more about the College of Veterinary Medicine department of infectious diseases, see www.vet.uga.edu/id.