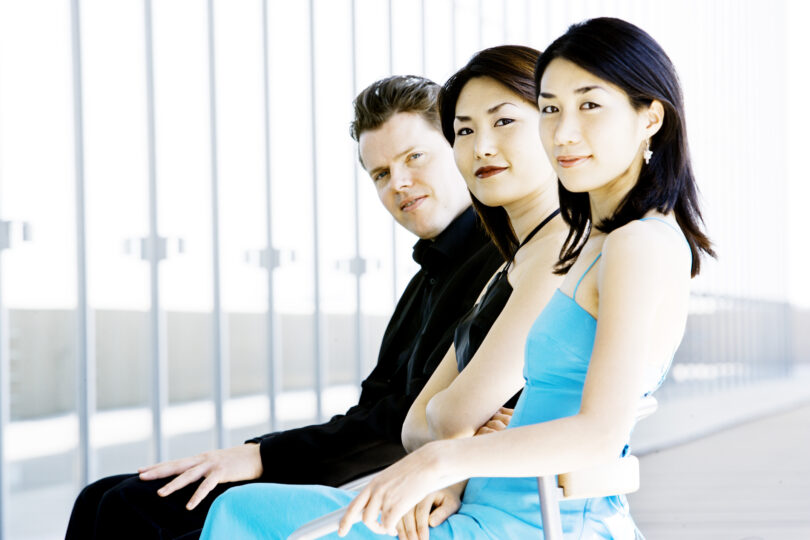 Trio con Brio Copenhagen, a family that plays together, will appear at the UGA Performing Arts Center March 14 with music by Beethoven, Prokofiev and Tchaikovsky. The trio—comprised of two sisters, violinist Soo-Jin Hong and cellist Soo-Kyung Hong, and the latter’s husband, pianist Jens Elvekjaer—appears regularly at the world’s leading venues and concert series, including Carnegie Hall and Lincoln Center.

BBC Music magazine called the group’s recording of the complete Beethoven piano trios “a triumph.” Their UGA Presents performance at Hodgson Concert Hall opens with Beethoven’s “Trio in E-flat major, Op. 70, No. 2,” a piece program annotator Laurie Shulman calls “something of a sleeper among Beethoven’s chamber works.” She says it is remarkable for its “intimacy and melodious atmosphere.”

The trio, which was founded at the University of Music and Performing Arts in Vienna in 1999, plays both older and new music. They have made their own contribution to the repertoire by arranging numbers from Prokofiev’s thrilling ballet “Romeo and Juliet.” In Athens, they’ll play the skittering “Juliet–the Young Girl” and the strutting “Masks,” music for Romeo, Mercutio and Benvolio arriving at the Capulets’ ball. “The Montagues and the Capulets” communicates the menacing antipathy between the two houses. And Prokofiev’s portrait of Romeo’s friend Mercutio provides dazzling opportunities for all three players.

Shulman writes that Tchaikovsky’s monumental piano trio “stands alone among his other chamber compositions, an independent only child with a big ego.” It is essentially a requiem for his friend Nikolai Rubenstein, a virtuoso pianist and director of the Moscow Conservatory who died at just 45 years old. A large-scale work in just two movements, it honors Rubenstein’s blazing pianistic talent, as the piano shines brilliantly throughout.

Classical music in the UGA Presents season will continue with Edgar Meyer and the Scottish Ensemble (April 1) and the Pacifica Quartet and clarinetist Anthony McGill (April 19). The Atlanta Symphony Orchestra (May 1) will appear during the Performing Arts Center’s 25th anniversary gala week to perform music by Bruch and Beethoven.

For each of these performances, 25 tickets are available for just $25, to mark the 25th anniversary of the Performing Arts Center. Tickets for UGA students are $10.