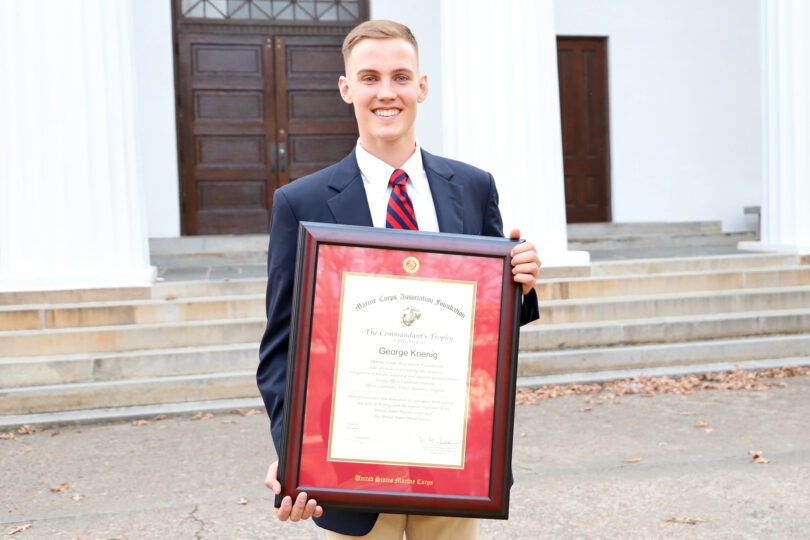 Tripp Koenig stands in front of the Chapel. (Photo by Stephanie Schupska)

George “Tripp” Koenig of Atlanta puts boots on the ground when it comes to leading and inspiring. A University of Georgia senior, he spent six weeks over the past two summers in Quantico, Virginia, tackling the task of U.S. Marine Corps Officer Candidate School.

He didn’t just survive the process. Koenig thrived, rising to the top of his class and earning the Marine Corps Commandant’s Trophy, an honor presented to the candidate with the highest aggregate score in leadership, academic performance and physical fitness during the six-week Platoon Leaders Class.

On March 12, Koenig brought the Commandant’s Trophy to the University of Georgia—the award is bestowed on both the candidate and the university they attend, for “outstanding preparation of students.” David S. Williams, associate provost and director of the Honors Program, accepted the award on the university’s behalf. 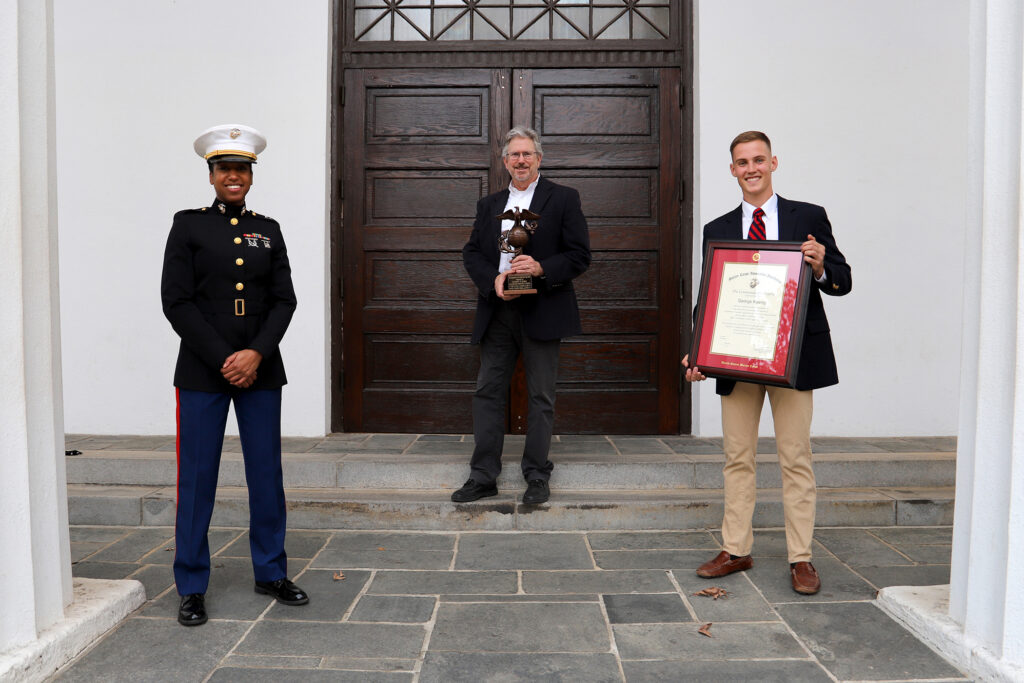 An Honors student, Koenig is majoring in finance and international business in the Terry College of Business.

“The Commandant’s Trophy is definitely one of those awards you can’t win alone,” said Capt. Alicia Chambers, Koenig’s Marine Corps officer recruiter. “Tripp was able to be a selfless leader to help out his peers, to make his entire unit more cohesive as they attacked missions together and accomplished them together.”

From the time he set foot in Athens in 2017, Koenig said his goal was to find a purpose greater than himself, and he reached out to the Officer Selection Station at the end of his first semester. Since then, he has focused on becoming a Marine, which tops the list of goals he wrote for his second summer at OCS.

“The four goals I wrote down are ‘become a Marine. Love others first. Crush it academically. Maintain a positive mental attitude,’” he said. “I could not have cared less last summer where I finished, and I think that is what made the difference. I just wanted to do the best I could, and I felt that I really did a better job of helping others versus the year before.” 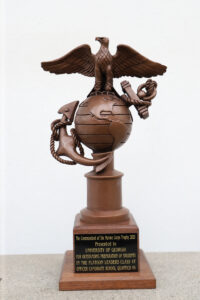 Koenig is the fourth of five siblings—they have all either graduated from or are attending UGA. His desire to serve his country is also in the family: His dad and two uncles were Marines, and his grandfather served in the Korean War.

“When I found out that I was winning last summer, I was just glad that my family would have a reason to watch the OCS graduation ceremony on Zoom outside of obligation,” Koenig said. “I was glad they would have something to be excited about.”

On March 12, his family was excited to finally celebrate him in person at the social-distanced event in the UGA Chapel.

“This was the first time I’ve presented the Commandant’s Trophy to one of the candidates I’ve put in the Marine Corps,” Chambers said. “I was excited, but I wasn’t surprised. The first interaction we had, I realized how deep his intelligence ran on empathy and respect and determination and all of those little intangible aspects that you really expect from young leaders who become Marine officers.”

Koenig leads workouts every Tuesday and Thursday at 6 a.m. for the other candidates in the Platoon Leaders Class program and hosts weekly knowledge sessions to prepare them for OCS. He is also an avid rock climber, runner and reader. His involvement at UGA has included being a Tate Honor Society member, UGA Catholic Center small group leader, Sigma Phi Epsilon philanthropy chair, Extra Special People volunteer and UGA Club Golf member.

He earned the rank of Eagle Scout in the Boy Scouts of America and was an assistant dining hall manager at Philmont Scout Ranch. He was also a runner with the Athens multi-specialty law firm Cook and Tolley LLP, and was a recipient of the Arms-Harris Scholarship and the IFC Scholarship. He received a perfect score on the physical fitness test at OCS with max pullups, max crunches and a sub-18-minute 3-mile run.

Koenig will graduate from UGA on May 13 and commission as a second lieutenant on May 22. In November, he will attend The Basic School in Quantico, and after six months of training, he will be assigned his specialty.

“I know for a fact that if somebody tells me they’re ready to be a Marine officer, I know they’re going to be successful,” Chambers said. “That’s exactly how my first conversation went with Tripp.”

For more information about the Marine Corps Platoon Leaders Class program, contact Chambers at osskennesaw@gmail.com or Tripp Koenig at gak86429@uga.edu.