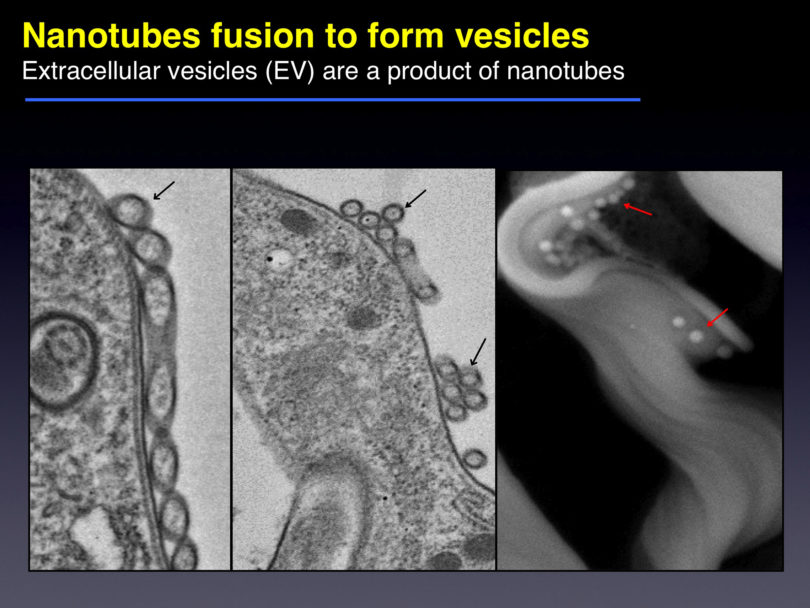 Findings could impact how sleeping sickness is treated

Athens, Ga. – While scientists have known for years that African trypanosomes cause sleeping sickness, they’ve been left scratching their heads as to how these tiny single-celled organisms communicate. A University of Georgia study, published Jan. 14 in the journal Cell, helps solve this mystery.

The UGA researchers discovered that long filaments—that look like beads on a string—form by budding from the flagellum of African trypanosomes and then release pieces of the parasite into the host. This causes anemia and influences the outcome of infection leading to human African sleeping sickness and the cattle disease nagana.

The UGA researchers theorize that the extracellular vesicles, as the free-floating beads are scientifically known, are being used by the parasite to communicate with each other and with the host’s body. Even before they pop off into vesicles, the nanotubes extending from the flagellum help the single-celled parasites talk to each other. The severe anemia caused by the parasites may be an accidental side effect of the extracellular vesicles fusing with host red blood cells.

There were 6,314 new cases of African sleeping sickness in 2013. The disease, fatal if left untreated, threatens millions of people annually in the 36 countries in sub-Saharan Africa where the parasite-transmitting tsetse fly lives, according to the World Health Organization.

The research findings provide another clue to how African trypanosomes infect humans. It may also lead to improved therapies to fight sleeping sickness; current medications used to combat the disease have improved over the past decade but still include an old arsenic-based drug that kills between 5 and 10 percent of the people receiving treatment, said the study’s senior author Stephen Hajduk, a professor of biochemistry and molecular biology in the UGA Franklin College of Arts and Sciences.

The parasite also causes major economic losses by infecting and killing between 5 million and 7 million cattle each year through nagana, he said.

The research into trypanosome nanotubes and extracellular vesicles started as a side project in Hajduk’s lab about two years ago. As the study’s lead author Tony Szempruch spent more time peering into a microscope, the tiny, wiggly organism revealed its cellular communication potential.

“What you see here,” he said, pointing at the flagellum, “is that you can get that synthesis of the nanotube, but then it will quickly break down into what appears to be free vesicles that float out of focus.”

Szempruch, a doctoral student in the biochemistry and molecular biology department, developed a 3-D reconstruction of the nanotubes budding at the flagellum membrane. He was then able to look at the relationship of the flagellum, nanotubes and extracellular vesicles.

“The whole project developed out of our interest in how trypanosomes interact with one another,” Hajduk said. “Traditionally, people didn’t think of a single-celled organism needing to communicate with each other. But it has become more and more clear that they do.

“They’re actually able to sense when they’re at a certain level in the mammalian host in the bloodstream and then are able to respond to that in some way. As it turns out, a lot of this came together in looking at these extracellular vesicles that we’ve identified.”

Hajduk first noticed the nanotubes in 1978 when he was a doctoral student at the University of Glasgow, and they were first noted in a scientific publication in 1912.

“Even back then, we saw a lot of these extensions coming off the posterior end of the cell,” he said. “I think everyone has seen them, and, until now, everyone has ignored them. The parasite world—and trypanosome world—has largely lagged behind.”

Their findings—that nanotubes and vesicles are an important part of the communications process—show that the extracellular vesicles contribute to the complexity of African trypanosomiasis through the transfer of virulence factors between parasites and inadvertent interaction with host cells, which has a profound effect on disease, the study notes.

More research is needed into nanotubes in particular, Hajduk and Szempruch said. There’s also a great deal of interest in using the structures for non-invasive diagnostics and for targeted therapeutic use.

“The whole signaling thing, people are very excited about that,” Hajduk said, “whether it’s infectious disease or cancer or specific therapeutic development” to treat sleeping sickness.

“The fact that these vesicles are fusing with other host cells presents an interesting target for a therapeutic approach,” Szempruch said. “Perhaps treatment wouldn’t kill the parasite, but it would stop severe pathology associated with the parasite infection.”

The study, “Extracellular vesicles from Trypanosoma brucei mediate virulence factor transfer and cause host anemia,” was supported by the National Institutes of Health under grant numbers AI039033, AI060546 and 2G12MD007592.

A video of nanotube breakdown into vesicles is available at http://multimedia.uga.edu/media/video/vesicles.mov.