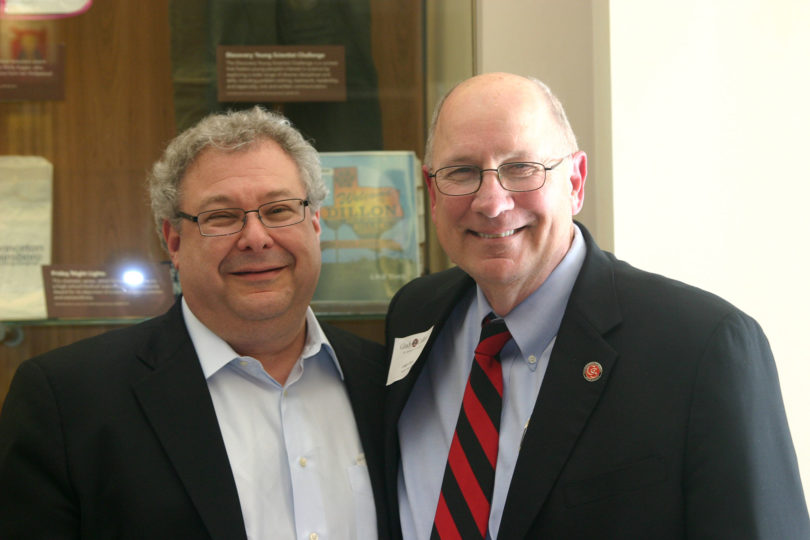 Athens, Ga. – Turner Entertainment President Steve Koonin and his wife Eydie have made a $250,000 personal gift and pledge to establish the Koonin Scholars Fund at the Grady College of Journalism and Mass Communication at the University of Georgia. The fund will provide scholarships for Grady students preparing for careers in the creative industries and media.

“The Koonin Scholars Fund will benefit students now and for years to come as they enter careers in a dynamic media space,” said UGA Provost Jere Morehead. “The University thanks Steve and Eydie Koonin for their vision.”

After expressing the college’s appreciation for the Turner Entertainment-Grady Learning Alliance, also made possible by Koonin and benefitting Grady students and faculty, Clark presented the inaugural class of five Koonin Scholars.

“On this occasion as we celebrate television, its leading scholars and its impact on culture and modern life, we are honored to announce Steve and Eydie’s generous gift,” Clark said. “The Koonin family are providing for generations of students who will study in fields that constitute the creative industries and become leaders like Steve.

“A Fellow of the Grady College, Steve is a great friend of Grady, entertainment media and the Peabodys. He is a steadfast friend of learning and creativity who inspired the remarkable TEN-Grady Learning Alliance that creates collaborative opportunities between Turner and Grady. And now the new Koonin scholarships help our students reach their dreams,” said Clark.

“We at Turner Entertainment are proud to be an extended ‘campus’ of the Grady College, as Dean Clark calls us,” said Koonin. “My family and I consider ourselves great friends of Grady, and we are thrilled to create the Koonin Scholars Fund and be forever a part of the learning enterprise at Grady.”

As president of Turner Entertainment Networks, Koonin oversees programing marketing, scheduling, strategy and operations for TNT, TBS, Turner Classic Movies and truTV. Koonin has been selected for TV Guide’s “The Power List” and named by Entertainment Weekly as one of the “Smartest People in Television.” Under Koonin’s leadership, TCM was honored with the Peabody Award in 2009. Before joining Turner in 2000, Koonin spent 14 years in executive roles at the Coca-Cola Company. His son, David, is a 2010 Grady College graduate with a bachelor’s degree in telecommunication arts.

“Grady has given much to my family, both professionally and personally,” Koonin said. “It was the perfect college for my son to pursue his higher education and Grady has been a valuable incubator of creativity and enthusiasm for Turner Entertainment and our initiatives. Our family looks forward to returning as much favor as Grady has bestowed upon us.”

Koonin studied marketing at UGA and was named a member of the Grady Fellowship in 2010. He serves on the boards of the Metro Atlanta Chamber of Commerce, the Georgia Aquarium, the Fox Theatre and the Atlanta Symphony Orchestra. He is also a trustee of the Marcus Jewish Community Center of Atlanta.

Established in 1915, the Grady College of Journalism and Mass Communication offers undergraduate majors in advertising, public relations, journalism, digital and broadcast journalism, and mass media arts. The college offers two graduate degrees and is home to the Peabody Awards, internationally recognized as one of the most prestigious prizes for excellence in electronic media. For more information, see www.grady.uga.edu or follow the Grady College on Facebook and @UGAGrady on Twitter.