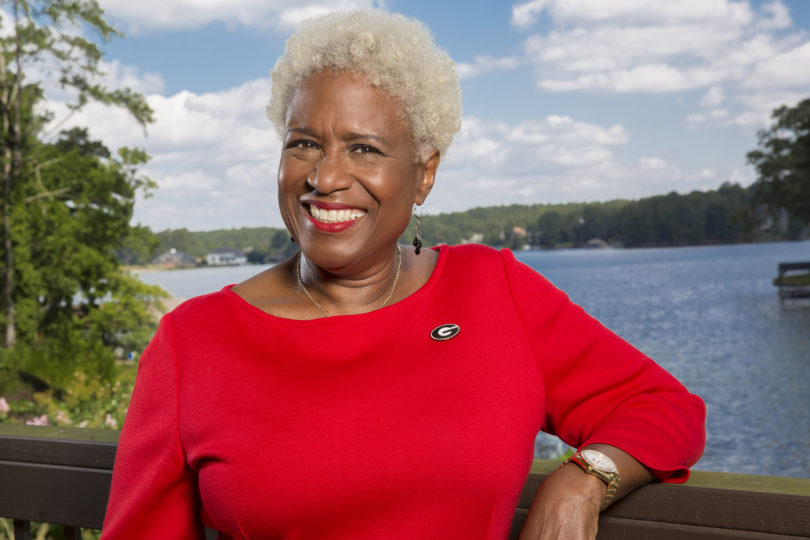 Athens, Ga. – Monica Kaufman Pearson, the award-winning journalist and former WSB-TV news anchor in Atlanta, will be among the 1,380 students eligible to walk at the University of Georgia’s summer Commencement ceremony Aug. 1.

Pearson retired from WSB-TV in 2012 after decades in front of the camera and enrolled in a master’s program in UGA’s Grady College of Journalism and Mass Communication. Like many nontraditional students who go back to school later in life, Pearson was seeking a change in direction.

Pearson, who has won more than 30 local and regional Emmy Awards, wanted to teach journalism to college students, but first she had to become one herself and earn a master’s degree.

“After 37 years working at (WSB-TV) and 45 years in the business, it would have been a shame to take everything I had learned to the grave,” Pearson said. “It was so important to share what I’ve learned in the business with young people. I wanted to share information, but I also wanted to leave my legacy.”

Pearson earned her undergraduate degree in English from the University of Louisville; she also studied at a summer program at Columbia University’s Graduate School of Journalism in 1969. But it had been decades since she had to prepare for an exam or write an academic paper.

The term “nontraditional” is typically used to describe an undergraduate student who takes a break in studies between high school and college—or attends school part time, works at least 35 hours a week, is financially independent, supports a family, is a single parent or did not earn a formal high school degree.

“All I had to pay for were my books, and of course I had to invest my time,” Pearson said. “But it was one of the best decisions I have ever made.”

Pearson said it was “freeing” to transition from being a TV anchor to being a student. However, she did have to go back-to-school shopping to replace her suits and heels with the more casual clothes worn on campus.

“To encounter Monica Pearson, ensconced in a towering stack of media history books, clad in a UGA hoodie, as I did often this year, is to be reminded of the power of education and the life of the mind,” said Charles Davis, dean of Grady College. “Having a newly inducted member of the Atlanta Press Club’s Hall of Fame in our graduate program brings benefits to us all—to our faculty and her fellow graduate students, of course, but also to our undergraduates who are very well aware of her towering presence in Georgia journalism.”

Pearson was often the oldest student in the classroom. She remembers showing up early to her first class and being asked by a classmate if she was the professor. But Pearson also met other nontraditional students like herself.

“The biggest challenge for me as a nontraditional student was to convince people that I was not there to be a showboat, news anchor or prima donna,” Pearson said. “I was really there to learn.”

You might wonder what an award-winning veteran journalist would have to learn about journalism and mass communication from a graduate school. While already knowing plenty about producing news, Pearson said she learned about the theories of communication and diversity in media.

“My mind was just opened so much,” she said. “I was a good reporter. I would have been a better reporter if I had gone through this (program) earlier.”

Pearson found her niche studying the history of American media.

As a TV journalist, Pearson was known for her profiles about influential or interesting people. In her TV show “Closeups,” Pearson interviewed celebrities to gather their deeply personal stories. As a graduate student, she found she was able to explore historical personalities through research.

“It’s like a ‘Closeups’ interview, only he’s not here to answer my questions,” Pearson said.

Instead, she extensively researched historical documents to learn about her subject.

“Perhaps the most wonderful aspect of Monica’s return to school is how passionately she has thrown herself into her thesis research, and how, like many nontraditional students, her professional experience informs her graduate study,” Davis said. “She’s an inspiration to us all.”

Like many other parents, Pearson’s mother, Hattie Edmondson, will watch her daughter walk in her cap and gown across the stage of Stegeman Coliseum.

With graduate school complete, Pearson is realizing her goal to teach college students. She will lead a class this fall at Atlanta Metropolitan State College.

Pearson also is considering seeking either a doctorate or a Master in Fine Arts degree.

For a woman who already accomplished so much in life, Pearson seems to have found new inspiration from her recent college experience.

A video interview of Pearson talking about her time at UGA is available at http://vimeo.com/102163426.