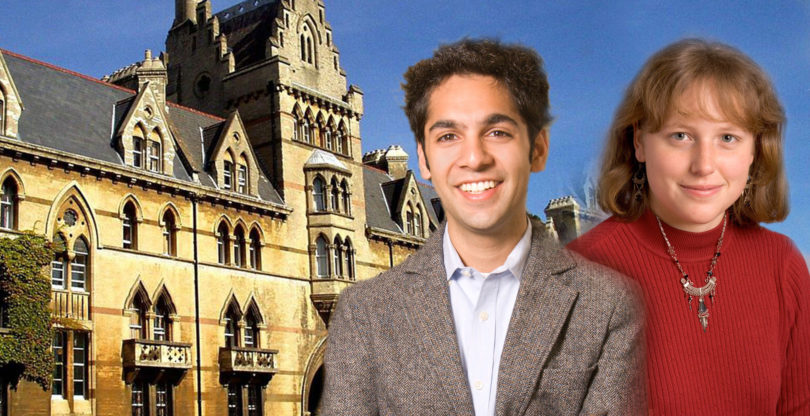 While at Oxford University

UGA is the only public university in the nation to have two recipients of the Rhodes Scholarship this year.

Senior Deep Shah of Duluth and 2005 graduate Kate Vyborny of Washington, D.C., have been awarded 2008 Rhodes Scholarships to attend Oxford University, England’s oldest institution of higher education. Both are UGA Foundation Fellows and Shah was also the recipient of a 2007 Truman Scholarship.

Prior to this year, UGA has had a total of 19 Rhodes Scholars—four of whom were named since 1996.

Shah, who will graduate in May with bachelor’s degrees in international affairs and biology, plans to pursue a master of science degree in global health science at Oxford.
Vyborny, who earned bachelor’s degrees in economics and international affairs from UGA, currently works for the Center for Global Development. She would like to complete a master of philosophy degree in development studies at Oxford.

“This remarkable accomplishment proves that UGA students are competitive with students anywhere,” said UGA President Michael F. Adams. “It also speaks to the quality of the Honors Program, which challenges the students and prepares them for success in the classroom and in these scholarship competitions.”

While at UGA, Shah has been able to combine his interests in public policy and medicine through his research and internship experiences. As a member of UGA’s Honors Program, Shah has studied Parkinson’s disease at Emory University, resulting in a published paper as second author in the Journal of Comparative Neurology.

Shah also investigated the preventative and preparatory measures a college town like Athens can take for a bioterrorism attack, which is the basis of his Honors thesis. He presented those findings at a symposium the Honors Program’s Center for Undergraduate Research Opportunities sponsors on campus.

“I feel very lucky to have attended college at UGA and received the full support of the Honors Program and Foundation Fellowship throughout my time in Athens,” said Shah. “My family has been extremely supportive of all my efforts, and I am very grateful for the influence they have on my life.”

Shah has served as a public policy intern in the Washington, D.C. office of Sen. Johnny Isakson (R-Ga.), as well as for the Greater New York Hospital Association and a children’s clinic in Costa Rica.

He also has participated in travel-study programs in China, Greece, New Zealand, Turkey and Japan.

Shah had the opportunity to analyze the policy decisions of former President Jimmy Carter as one of six student panelists at the UGA conference held in January 2007 to mark the 30th anniversary of Carter’s inauguration.

Shah also has been interviewed by The Chronicle of Higher Education for a student activism article about his role as founder and president of UGA’s first student-run think tank, Roosevelt@UGA. He also has served as co-coordinator of Students Together Ending Poverty, a group raising awareness and researching strategies to combat poverty in Athens.

Her interest in international public service began at UGA when she traveled abroad to Ecuador, China and Croatia, investigating development issues. On her second trip to Ecuador, Vyborny served as a program assistant with the Foundation for Sustainable Development, coordinating the interns and assisting them in designing their service projects.

Vyborny, who was a UGA First Honor Graduate with a perfect 4.0 GPA, also interned at UGA’s Center for International Trade and Security and participated in the center’s Security Leadership Program. Additionally, she worked extensively with the Amnesty International chapter at UGA.

“I am honored and delighted to be named a Rhodes Scholar,” said Vyborny. “The opportunity to pursue development studies at Oxford will give me some of the tools I need to help improve development policy and improve the lives of the world’s poor.”

Following graduation in 2005, Vyborny was one of seven college graduates nationally selected for a one-year fellowship with the Carnegie Endowment for International Peace. She researched, wrote and edited papers on trade and development issues and assisted in the research and preparation of a major publication, Winners and Losers: Impact of the Doha Round on Developing Countries, assessing the impact of multilateral trade policy on development. Vyborny currently is co-authoring a book on globalization and inequality.

“Kate and Deep are wonderful people in whom I have great confidence,” said David S. Williams, director of UGA’s Honors Program and UGA faculty representative for the Rhodes Scholars Program. “It is inspiring to be around both of them. As Foundation Fellows and Honors students, they seized the travel, research and internship opportunities presented to them and built records of success and promise. Their passion and dedication are obvious, and it is clear that they will make powerful contributions to the world.”

Rhodes Scholars are chosen in a two-stage process. Candidates must first be endorsed by their college or university, then selection committees in each of 16 districts invite the strongest applicants for an interview. This year, 209 applicants from 98 schools reached the final stage, from which the final 32 scholars were selected.