Two faculty members at the University of Georgia have been named University Professors, a title bestowed on those who have had a significant impact on the university in addition to fulfilling their regular academic responsibilities.

The 2020-2021 honorees are Timothy Adams Jr., the Mildred Goodrum Heyward Professor in the Hugh Hodgson School of Music, and James N. Moore, Josiah Meigs Distinguished Teaching Professor, Distinguished Research Professor in the department of large animal medicine and director of educational resources in the College of Veterinary Medicine.

The University Professorship recognizes individuals with outstanding records of teaching, scholarship and service whose actions as change-agents have improved the quality with which the university serves its missions.

“The 2020-2021 University Professors bring national and international recognition to the University of Georgia,” said S. Jack Hu, the university’s senior vice president for academic affairs and provost. “I congratulate them on this honor and thank them for their exemplary commitment to students and to advancing knowledge and creativity.” 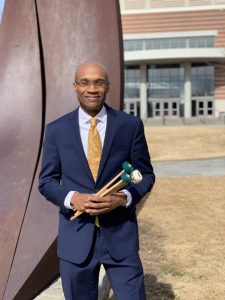 Adams is a highly accomplished composer, recording artist and author of numerous pedagogical materials. Over the course of his 40-year career as a musician, he has worked with many of the world’s leading musicians, conductors, composers and recording artists, including Leonard Bernstein, Luciano Pavarotti, Yo-Yo Ma, Tony Bennett, James Taylor, John Denver and Linda Ronstadt.

Under his direction, the percussion studio in the Hodgson School has grown in both reputation and achievement to its current status as one of the finest such studios in the nation. His former students have an extraordinary record of success, many of whom have careers in military bands, orchestras across the United States and Asia, and on Broadway.

Adams is a passionate advocate for innovation, change and growth in all music fields and a champion for advancing diversity, equity and inclusion. His current academic work includes a commission from the Erie Philharmonic in which he is composing a piece honoring the life and work of Harriet Tubman. He is also working on a collaboration called “8:46” with Grammy-winning bassist Dwayne Dolphin. This project will address social and racial injustices brought to light in the summer of 2020.

Adams is an in-demand speaker, with venues including New York University and the Peabody Conservatory of Music of Johns Hopkins University. He also recently received the Cleveland Institute of Music Distinguished Alumni Award and was a featured speaker in their 2020 commencement ceremony.

“Tim approaches everything about music with the passion and wonderment of a new enthusiast,” legendary jazz musician Wynton Marsalis wrote in a nomination letter. “He investigates, experiments, discovers, implements and shares his findings with a missionary seriousness.” 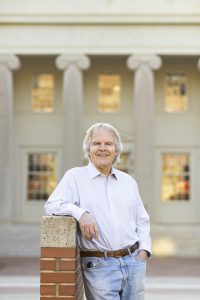 Moore is considered an international expert for his research on gastrointestinal diseases and endotoxemia, a life-threatening equine emergency. His research has increased awareness and improved equine endotoxemia treatments and made UGA a global center of excellence for colic research.

Moore has written approximately 140 peer-reviewed articles and several book chapters, and he has edited four textbooks. He has also been instrumental in developing over 40 interactive books on a wide range of veterinary medicine topics, including small animal dentistry and equine lower respiratory disease.

Along with being recognized as a leader in equine medicine research, Moore is a recognized innovator of new instructional tools in veterinary medicine. He has developed electronic resources that help veterinary students learn anatomy and physiology by turning complex subjects from textbooks into 3D models and animations. These materials help reduce student anxiety and improve their confidence in veterinary medicine.

“He has excelled, developed national and international recognition, and had meaningful impact on every level and in all mission areas of a land-grant institution—teaching and learning; research and discovery; administrative, leadership and other service; and outreach and community engagement,” wrote Rustin Moore, dean of the College of Veterinary Medicine at The Ohio State University, in a nomination letter. “Not only that, but he has demonstrated what it takes to remain an engaged, relevant, productive and contributing member of the academy for 40 years and counting.”

University Professors receive a permanent salary increase of $10,000 and yearly academic support of $5,000. Nominations from the deans of UGA’s schools and colleges are reviewed by a committee, which makes a recommendation to the provost.