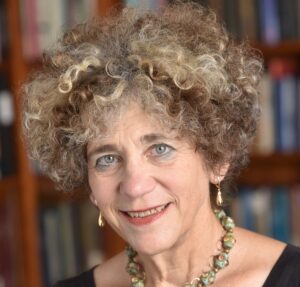 Johanna Drucker is an arts and humanities scholar internationally renowned for her work on subjects as far-reaching as the history of graphic design, experimental poetry and the alphabet.

When Drucker spoke last month in the University of Georgia Signature Lectures series, she harnessed decades of lessons from her research and practice to address the deterioration of “the authority of knowledge” and the current and future standing of education and expertise in our society.

Drucker, Distinguished Professor and Breslauer Professor in the department of information studies at UCLA, spoke to more than 50 participants in the virtual event Sept. 25, which was hosted by the Office of the Senior Vice President for Academic Affairs and Provost, the Willson Center for Humanities and Arts, the UGA Libraries and the Franklin College of Arts and Sciences.

In her talk, “Rethinking Assumptions: The Current Value(s) of Academic Work,” Drucker used a detailed and personal account of her decades-long progress toward writing what eventually became a “meta-biography” of the early 20th-century European avant-garde writer and artist Iliazd to illustrate the concept of “historical parallax”: the idea that we view historical subjects— people, events, ideas—not just in the context of their time and place, but of our own as well.

Drucker became aware that Iliazd had never examined the values inherent in his work by acknowledging his own place in history. Her book—which she began writing in 1985 and is scheduled to be published this year—could only be completed once she altered her approach to include that historicity, including with regard to her own input, which her subject himself had ignored.

Historical parallax, Drucker contended, is essential both for assessing the values inherent in artistic or academic work— the individual beliefs that inform its production—and for assigning value to the work as a “consensual shared agreement.”

“What are the values in our work,” she asked, “and what is the value of our work? And how do we see that in relationship to the possibility of radical transformation” of academia in the COVID-19 era, during which the historical parallax is so jarringly divided by the pandemic and its cultural and economic reverberations?

“We are in a time of crisis,” Drucker said. “The current attack on the legitimacy of expertise in every single area – whether it’s law, politics, medicine, epidemiology, the humanities, the sciences, environmental/climate studies – this is the challenge. … If you are committed to academic work, its educational mission and its research mission should be, I believe, to preserve the value of legitimacy in knowledge production and the institutional and intellectual frameworks within which that has warrant and potency in the world.”

The Signature Lecture Series features speakers noted for their broad, multidisciplinary appeal and compelling bodies of work. All are free and open to the public, and the fall 2020 series is being held in a virtual, online format.