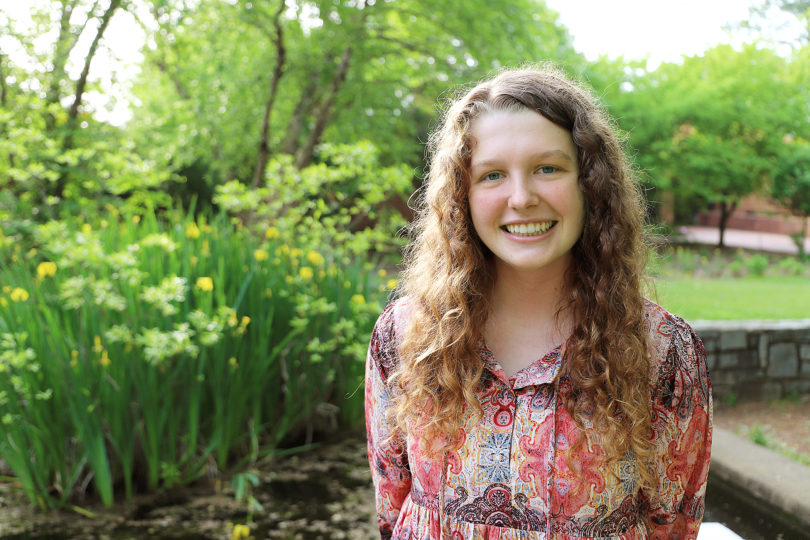 Diane Klement, from Evans, is majoring in ecology with a minor in studio art. (Photo by Stephanie Schupska/UGA)

University of Georgia junior Diane Klement aspires to create strong bonds between people and the land, and her focus has earned her national recognition as a 2019 Udall Scholar.

She was one of 55 undergraduates from across the nation and U.S. territories selected. The scholarship is awarded to sophomores and juniors on the basis of their commitment to careers in the environment, Native American health care or tribal public policy.

Klement, from Evans, is majoring in ecology with a minor in studio art. An Honors student, she plans to pursue master’s degrees in environmental science and creative writing. She hopes to work as a director of land conservation and community stewardship and as a contributing writer and illustrator.

“Diane is a most dedicated and deserving Udall recipient, and we congratulate her on earning this prestigious award,” said David S. Williams, associate provost and director of UGA’s Honors Program. “She has a strong record of service and achievement across the board—exploring and promoting conservation on national, state and local levels.”

With the addition of Klement, UGA has had 13 Udall Scholars in the past nine years and 18 total since the scholarship was first awarded in 1996.

Through work with conservation organizations, Klement hopes to expand their advocacy for preserving public lands and lands considered grey areas, such as farms, campus greens and roadside forests. These grey areas may lack land conservation statuses, she said, but can still serve as havens where nature flourishes.

She also aspires to use her creative skills to write and produce visual art.

“From Georgia to Montana to Colorado, Diane Klement has demonstrated an unwavering commitment to and boundless energy for environmental stewardship,” said Jessica Hunt, UGA’s major scholarships coordinator. “Her interdisciplinary, arts-focused approach to conservation is sure to have a tremendous impact on our respect for public lands and green spaces.”

Klement was selected to participate in the Orion Environmental Writers’ Workshop this past March. Last fall, she studied human/land relations through the University of Montana’s Wild Rockies Field Institute. She has interned for the Great Old Broads for Wilderness, Cumberland Island Museum, Odum School of Ecology, Savannah Riverkeeper and Augusta Locally Grown.

At UGA, she serves as a research assistant in the lab of Jeb Byers, Meigs Distinguished Teaching Professor of Ecology. She was also involved in ecological problem-solving and as a Watershed Learning Network website artist, Odum School of Ecology volunteer and UGA’s Catholic Center Environmental Club founding member. She is a Wild Cumberland board member, Wild Intelligence youth mentor and member of the Georgia Society for Conservation Biology and UGA Chew Crew Restoration Initiative. She assisted with the UGA old-growth forest restoration plan and was a CURO research assistant.

The Udall Scholarship provides up to $7,000 for eligible academic expenses and includes a four-day orientation in Tucson, Arizona. Since 1996, the Udall Foundation has awarded 1,678 scholarships totaling $8,475,000.