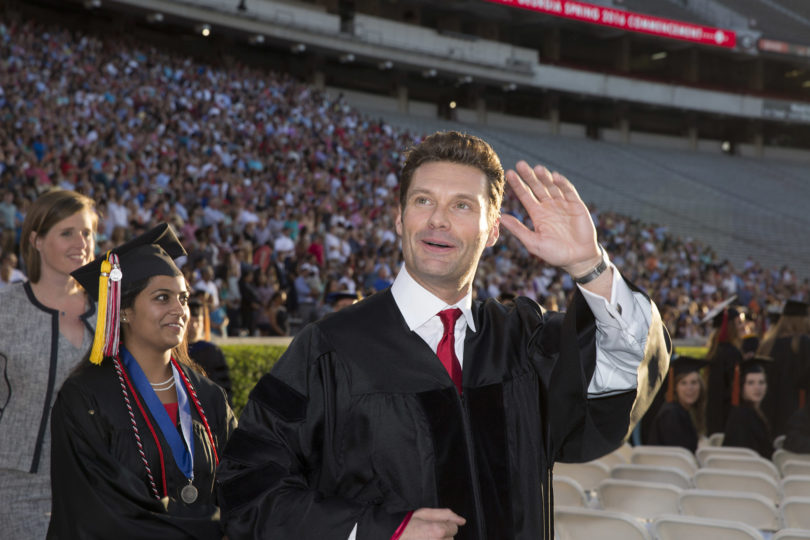 Ryan Seacrest waves to the crowd during the 2016 spring undergraduate Commencement processional. Seacrest encouraged the class to "Make sure you happen to the day instead of it happening to you."

Ryan Seacrest encouraged action as he addressed students, their family and friends, and faculty and staff at the undergraduate Commencement May 13.

“Class of 2016, this is your day, and your amazing life is waiting for you. Go make it happen,” said Seacrest, who holds pre-eminent positions in broadcast and cable television as well as nationally syndicated radio and local radio. He attended UGA as a freshman.

Seacrest told the more than 4,000 undergraduates that one of his favorite phrases is from poet John Ciardi who said, “The day will happen whether or not you get up.”

“Make sure you happen to the day instead of it happening to you,” Seacrest told the Class of 2016.

Seacrest, who received an honorary Doctor of Humane Letters degree while at the ceremony between the hedges, shared his life code during his keynote address. The code included living your passion; trusting your gut; listening; laughing loudly, preferably at yourself; indulging curiosity; being prepared; being impatient; and giving back.

“Be kind, be brave. Hold the door, look everyone in the eye. Say ‘thank you’ with meaning,” Seacrest also told the crowd.

Karishma Sriram, who graduated with bachelor’s degrees in biochemistry and molecular biology from the Franklin College of Arts and Sciences, took her ­classmates down memory lane, reliving some of the important dates during their time at UGA.

“While I’ve only shared a few dates from our past four years, every day that was in between has formulated and created you—you have started this amazing and beautiful narrative for yourself,” she said. “Today is not the end, it is just the very beginning.”

Earlier in the day, an estimated 252 doctoral candidates and 957 master’s and specialist degree students were eligible to walk in the graduate ceremony in Stegeman Coliseum.

Maurice Daniels, dean of the School of Social Work, addressed the graduates and guests. He spoke of how much of a distinction holding a graduate or doctoral degree brings, but encouraged graduates to keep following their passions and to be bold and unrestrained in pursuit of their dreams.

“Subscribe to whatever is true, embrace whatever is noble, do whatever is right,” he said. “I challenge you to remember the simple, but very profound words, of a Chinese proverb: ‘Let those who drink the water today remember with gratitude those who dug the wells.’ “

At both ceremonies, UGA President Jere W. Morehead told graduates that strong relationships among students, faculty, staff and alumni are what sets UGA apart from other institutions.

“The individuals who make up the University of Georgia care deeply about this institution, and they care deeply about one another. You build meaningful connections here as students, and together we are a family,” he said. “You have earned your degrees through your effort and determination, and, along the way, you have advanced knowledge with your professors, received assistance from staff members, collaborated with your fellow students, and—most importantly—you have given back to those around you.”