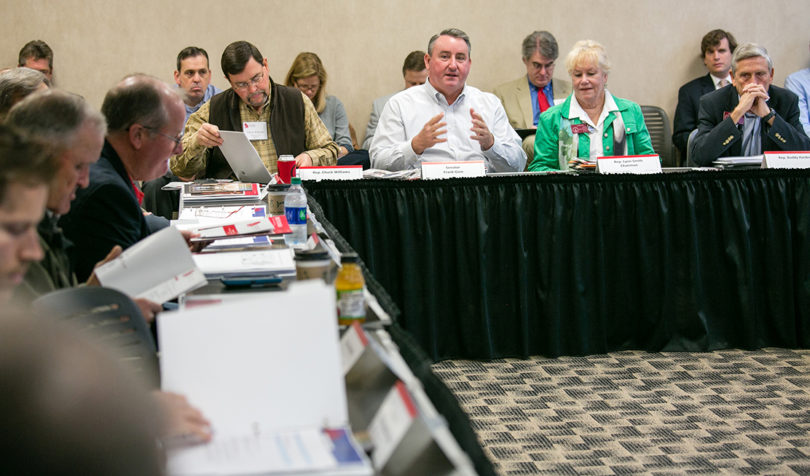 Members of the Georgia General Assembly discuss issues regarding Georgia’s dams during the last Environmental Policy Academy meeting in December 2016.

For the past six years, members of the state House of Representatives’ Natural Resources and Environment Committee have met annually as part of the Environmental Policy Academy, led by the Carl Vinson Institute of Government at UGA.

“In natural resources, everything ends in an -ist or -ology,” said Rep. Lynn Smith, R-Newnan, who chairs the committee. “It’s all academic, technical. I thought we just need a little bit more of an academic setting to feel more comfortable when we debate. At least we’ll know the right questions to ask.”

The academy is supported by grant funds from the R. Howard Dobbs Jr. Foundation and facilitated by Shana Jones, program manager for the institute’s Planning and Environmental Services Unit. Legislators meet in locations around the state to hear from experts on environmental and natural resource issues facing the state.

Legislators from a corresponding committee in the state Senate also are invited to this year’s academy, which meets in October. Sen. Frank Ginn, R-Danielsville, will be attending as committee chairman for the second straight year.

That diversity of issues is one of the reasons Smith thought the policy academy was needed. As part-time legislators, it is difficult to be well-versed in all of the issues the Georgia General Assembly considers each year, from banking to transportation to education. When it comes to the environment, Smith says that even representatives who are interested may not fully grasp the impacts of a policy across the environmentally diverse state.

“I felt like we needed to make an effort through an avenue like the policy academy to bring our legislators outside the area they’re familiar with,” Smith said. “We need to know the state to make state policy.”

Last December, legislators heard about topics such as protecting gopher tortoise habitats and dam safety. That session was a first for new committee member Robert Dickey, R-Musella. The farmer from middle Georgia, who also is chairman of the House’s Appropriations Subcommittee on Education, said the academy got him up to speed quickly.

“When you get to session in January, you get bombarded with a lot of things,” he said. “You want to have this understanding ahead of time. I think the policy academy was helpful in focusing the committee on where the need is for legislation and where it isn’t.”

If you don’t have (an environmental) background, and you’re being asked to make what is a difficult vote, it’s very helpful to have firsthand experience and learn from experts. — Rep. Pat Gardner

Smith has chaired the environment committee since 2005 but it wasn’t until 2011 that she started talking about putting together an academy with the Institute of Government. During her first six years as chair she discovered committee members didn’t have time to research the background and context of the complicated policies they were debating.

The academy’s goal became to present information in a nonpartisan and value-neutral way so legislators could have the knowledge they needed to make a decision during the frenetic atmosphere of the legislative session. After eight years on Smith’s committee, Rep. Buddy Harden, R-Cordele, said the annual academy is the best tool there is to learn the context of issues.

“Everybody comes from a different background,” Harden said. “When you’re on a committee as important as, I think, environmental quality and our environmental resources is, it’s absolutely necessary that we learn as much as we can.”

Rep. Pat Gardner, D-Atlanta, said the academy has been a big help to her. With career experience in education and health care, she wasn’t as knowledgeable about environmental issues. Visiting sites around the state, like Skidaway Island on the Georgia coast in 2015, helped her understand the ways legislation will impact people.

“It was very interesting to stand on the beach and see firsthand what the issues were,” Gardner said. “If you don’t have (an environmental) background, and you’re being asked to make what is a difficult vote, it’s very helpful to have firsthand experience and learn from experts.”

The academy could be a model for other committees, Dickey said.

“It streamlines things during the session,” he said. “We didn’t have to spend time trying to find out the facts. Being a legislator, I think all the other committees ought to look to UGA to do this. As a subcommittee chairman, it’s invaluable.”