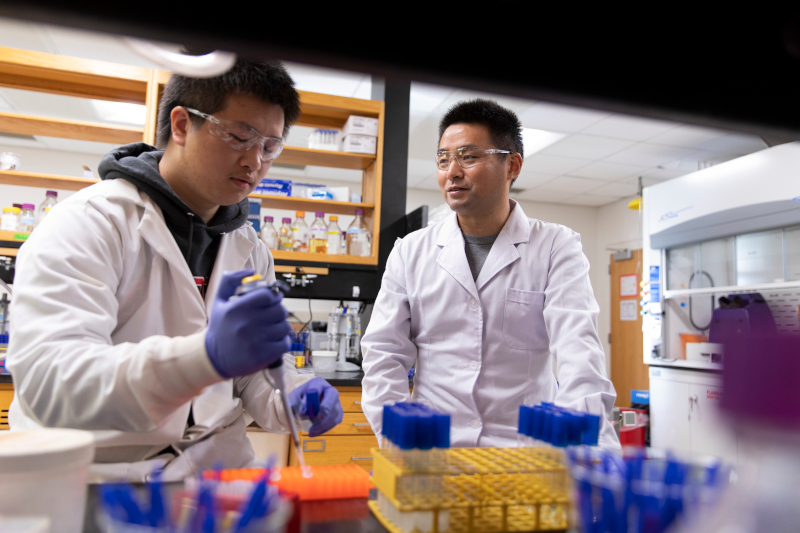 Research at the University of Georgia led to 50 new products being introduced to the market in fiscal year 2018, ranking UGA No. 2 among all U.S. universities and colleges for this important metric. This is the sixth year in a row that UGA has ranked among the Top 5 universities—including a No. 1 ranking for FY2017. This ranking is based on annual survey data from AUTM, a nonprofit organization that tracks technology transfer activity in higher education.

The 50 new products are diverse, and include:

Also in FY2018, UGA ranked No. 8 and No. 5 for other key metrics of research commercialization activity: the number of annual research licensing deals and the current number of active licenses, respectively. UGA has ranked among the country’s Top 10 universities in these categories for 12 consecutive years. 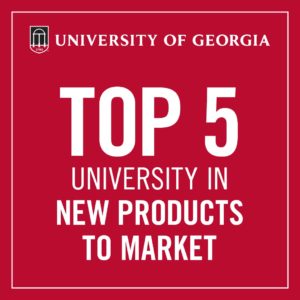 “These rankings reflect the cutting-edge research done by our faculty and students, combined with the expertise of UGA’s technology commercialization professionals and the work of our industry partners who develop products for market,” said Derek Eberhart, associate vice president for research and executive director of Innovation Gateway, UGA’s technology transfer organization. “The university’s success in commercializing the research of our faculty and students is as consistent as it is significant.”

In FY2018, UGA earned more than $10.5 million in overall licensing revenue, advancing it five spots to No. 26 among all U.S. universities and colleges.

In a separate but equally important category, UGA ranked No. 27 for the total number of active startup companies, its 16th consecutive year among the Top 30. In FY2018, Innovation Gateway generated an estimated $531 million in economic impact through its startup incubator, including $322 million in the state of Georgia.

UGA created an Innovation District in 2019 to support and catalyze its rapidly growing success in research commercialization and entrepreneurship. Under the district’s broad heading, the university has launched a number of new programs designed to help more faculty turn their discoveries into viable commercial products, either through licensing them to industry or forming their own startup companies.

And the passion for all things innovation has not been limited to faculty—in less than four years, enrollment in UGA’s entrepreneurship certificate program for undergraduates has exploded from 33 students to more than 800 this spring.

“As UGA’s research enterprise grows, I predict that increasing numbers of our faculty and student researchers will want to commercialize their discoveries,” said David Lee, vice president for research. “It’s a powerful, self-reinforcing cycle: As more of our researchers earn reputations for entrepreneurial success, we will naturally attract more faculty and students who come to UGA eager for the challenge. The ultimate winners are consumers, who benefit from these products reaching the market.”