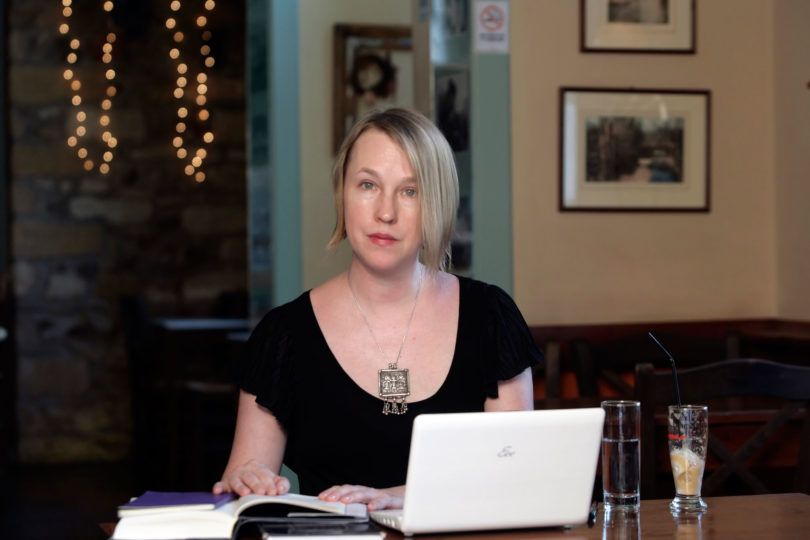 Athens, Ga. – University of Georgia alumna A.E. (Alicia) Stallings (A.B. ’90) has been selected as a 2011 MacArthur Fellow by the John D. and Catherine T. MacArthur Foundation. Stallings is one of 22 persons receiving the fellowship this year.

The MacArthur Fellowship is given annually to talented individuals throughout the world who have shown extraordinary originality and dedication in their creative pursuits and a marked capacity for self-direction. Recipients represent a variety of fields and are selected based on three criteria, which include exceptional creativity, promise for important future advances based on a track record of significant accomplishments, and a potential for their fellowship to facilitate subsequent creative work. The fellowship is often referred to as the “genius award” and comes with an unrestricted stipend of $500,000 to the recipient.

Stallings was recognized for her work as a poet and translator. Originally from Decatur, Ga. but now residing in Athens, Greece, Stallings majored in Latin while at student in UGA’s Franklin College of Arts and Sciences. She was in the Honors Program and came to UGA on a Foundation Fellowship, the university’s premier undergraduate scholarship that offers exceptional opportunities for international travel.

Stallings later received her master’s at Oxford University in England. Currently, she is the poetry program director of the Athens Centre and is married to John Psaropoulos, who is the editor of the Athens News.

One of Stallings’ lead instructors at UGA, Franklin Professor of Classics Emeritus Richard A. LaFleur stated, “…A. E. Stallings is a brilliant intellect, a warm and perceptive humanist, one of our most remarkable contemporary American poets and translators, and a dynamic young woman who is clearly poised for yet greater contributions to the arts and humanities…. As I look back over my 40 years as a professor of classical languages, I can honestly say that Alicia was perhaps the most exceptional student I ever taught and certainly has gone on to achieve acclaim as one of the most brilliant young poets of 21st-century America.”

Stallings’ debut poetry collection, Archaic Smile, received the 1999 Richard Wilbur Award and was a finalist for both the Yale Younger Poets Series and the Walt Whitman Award. Her second collection, Hapax (2006), was awarded the 2008 Poets’ Prize. In 2007 she published a verse translation of Lucretius’ De Rerum Natura (The Nature of Things), which, according to LaFleur, “…is surely among the most complex and startling of all surviving classical Latin poetry.”

Her poems have appeared in The Best American Poetry anthologies of 1994 and 2000. She has been awarded a Pushcart Prize, the Eunice Tietjens Prize, the 2004 Howard Nemerov Sonnet Award and the James Dickey Prize. In 2010, she was awarded the Willis Barnstone Translation Prize, and earlier this year, she won a Guggenheim Fellowship.

Stallings is the second UGA alumna to receive a MacArthur Fellowship. Beth Shapiro, who also was an Honors student and Foundation Fellow and earned her master’s and bachelor’s degrees in ecology from UGA in 1999, received the recognition in 2009. In 2003, Eve Troutt Powell, an associate professor of history, became the first UGA faculty member to receive the fellowship.
##