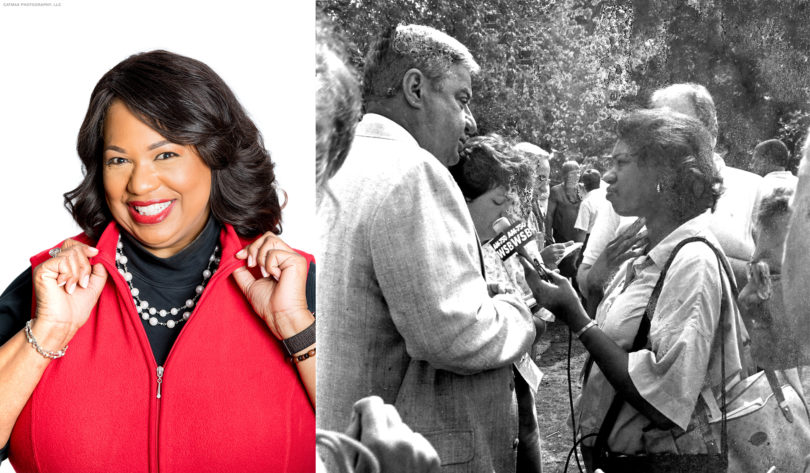 For decades, Condace Pressley has interviewed newsmakers — like Bert Lance (above, right).

For Condace Pressley ABJ ’86, the field of journalism is much more than a job. It’s a calling.  And for her, journalism came calling in middle school.

“My parents’ nickname for me was Miss Big Ears because I was always listening,” she laughs. “I was very nosy as a child. My inquisitive nature made journalism seem like a natural career path for me.”

A Marietta native, Pressley wrote for the Marietta High School newspaper and co-edited the yearbook. She fondly remembers her first time on stage as the narrator for her second grade Christmas play where she discovered her love for public speaking. When she enrolled in the University of Georgia’s Grady College of Journalism and Mass Communication, she thought she would go into television.

“Any young black girl growing up in Atlanta wanted to be Monica Kaufman Pearson,” she says, recalling the legendary WSB-TV anchor, UGA alumna, and now personal friend of Pressley.

But Pressley’s path at UGA led her to a career in radio instead of television. She volunteered at the campus radio station, WUOG, working her way up from reporter to news anchor. She loved the control she had over her stories. She chose to cover the local county commissioner meetings and school board meetings, which taught her to dig for the interesting angle.

“The news is about people,” she says. “Whatever the subject matter, it’s going to affect someone. The challenge is to find the people and find the story.”

Today, Pressley is a well-known voice across the Atlanta airwaves, hosting multiple radio shows on WSB Radio and Kiss 104.1 interviewing decades of newsmakers. On her hit show “Perspectives,” she interviews local celebrities and authors. The show celebrates its 30th anniversary next year.

From political races to the 1996 Olympics, Pressley has covered multiple spectrums of storytelling — even those that were tough to cover as a lifelong Atlantan.

“I covered the Braves’ trek from worst to first and the World Series in 1991. It was devastating when they lost, but I was on the field when they won in 1995,” she says with a smile.

Pressley’s storied career has landed her in the Georgia Radio Hall of Fame and on the 2017 list of Atlanta’s Top 100 Black Women of Influence. She joined the Centennial Class of Fellows of the Grady College in 2015. More than 30 years after graduating from the university, she now appreciates her calling even more.

“Journalism is more important today than it ever was. Facts are facts, despite those who will choose their ‘facts,’” she says. “It is rewarding work. Some people do very well at it and others live the struggle. This is a calling, not a job.”

Pressley has recently been named to succeed the retiring Jocelyn Dorsey as public service director of WSB-TV and Radio.