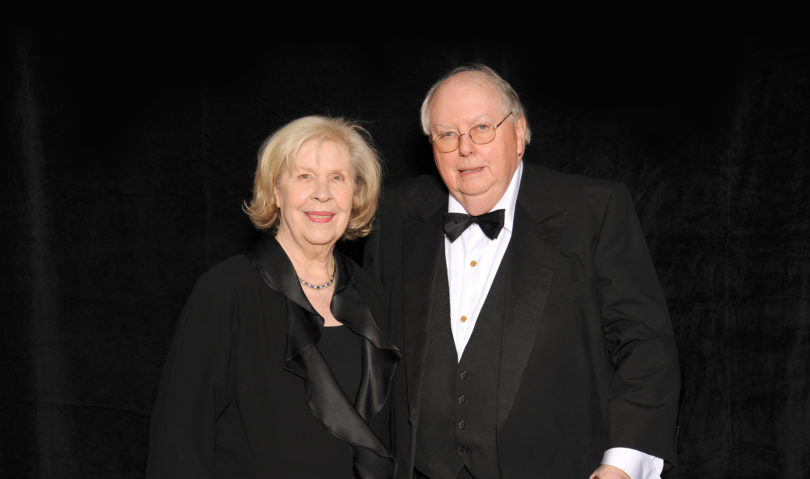 Athens, Ga. – The University of Georgia Alumni Association will present six awards to alumni, friends and faculty during its 78th annual Alumni Awards Luncheon on April 17 at noon in the Tate Student Center’s Grand Hall.

“The UGA Alumni Association is pleased to once again celebrate the extraordinary contributions of the University of Georgia’s most generous alumni and friends,” said Meredith Gurley Johnson, executive director of alumni relations. “It is also a time to recognize the importance of private support to the success of the university and to reflect on the transformative nature this engagement has on the lives of thousands of students each year.”

John and Marilyn McMullan, who met while attending UGA, value higher education and over the past 45 years, have made the university the beneficiary of their philanthropy. John graduated from UGA in 1959 and 1960 with undergraduate and master’s degrees in business, and is now the CEO of Camden Real Estate, an Atlanta-based company he founded in 1990.

The couple has established a number of scholarships at UGA, including a study abroad scholarship, the McMullan Academic Support Fund, the Mr. and Mrs. John F. McMullan Football Scholarship, and the McMullan Family Women’s Tennis Scholarship. The Dean’s Suite on the new Terry Business Campus will bear the McMullan family name. Marilyn serves on the Georgia Museum of Art board of advisors and John is an emeritus trustee of the UGA Foundation. In 2009, he received the Terry Distinguished Alumni Award, and in 2010, the UGA Alumni Association presented him with its Alumni Merit Award.

Morehead graduated from UGA in 1950 and 65 years later, is an Athens businessman and one of the university’s most generous benefactors.

Through his business, Flowers Inc., Morehead became close friends with the late Lamar Dodd, for whom UGA’s School of Art is named. Dodd inspired Morehead to become an avid art collector and today, the alumnus has assembled the largest collection of Lamar Dodd works and other significant collections of rugs and Chinese, tribal and pre-Colombian art and artifacts.

At the university and its Georgia Museum of Art, these items will be invaluable as a cultural resource that will be fundamental in teaching generations of students and the community.

Blanchard holds a Bachelor of Business Administration and a Bachelor of Laws from UGA. He spent 34 years as CEO of Columbus, Georgia-based Synovus Financial Corp., guiding it during its greatest era of growth and prosperity. His servant leadership approach led Georgia Trend to name him its Most Respected CEO in 1997 and Georgian of the Year in 2003. In 1999, Fortune Magazine named Synovus the best place to work in America, a direct result of Blanchard fostering a work-life balance as part of Synovus’ corporate culture.

Potts graduated from the Georgia Institute of Technology with a bachelor’s degree in industrial technology. In 2004, Potts retired as vice president and general manager of Temple-Inland Corporation. In total, he served 35 years in the international pulp and paper industry and was chairman of both the Paper Industry Management Association and the Technical Association of the Pulp and Paper Industry. Today he is the chairman of the board of CatchMark Timber Trust in Atlanta.

In 2006, Potts was appointed to the Board of Regents of the University System of Georgia and became chairman in 2010. He championed creation of the UGA College of Engineering, which has now enrolled more than 1,300 students since it was founded in 2012.

White, who specializes in the areas of labor law, employment discrimination, employment law and law arbitration, served as the first female dean of the UGA School of Law. During the 10 years she led the law school, she was inducted into the UGA Teaching Academy and was, awarded the Josiah Meigs Award, which is the university’s highest honor for teaching excellence. She oversaw a multimillion-dollar facility renovation, the hiring of 30 additional faculty members, the launch of the Business Law and Ethics program, and the creation of 40 new endowed funds for scholarships and faculty.

On Dec. 31, she stepped down as dean, yet remains on the School of Law faculty where she holds a J. Alton Hosch Professorship. In 2015, the School of Law established the Rebecca Hanner White Scholarship, which has since received more than $210,000 in gifts and pledges.

Today, Shah is an internal medicine and primary care physician resident in the J. Willis Hurst Internal Medicine Residency Program at the Emory University School of Medicine. He plans to serve as a primary care doctor and physician policymaker. He continues to support the UGA Honors Program by engaging with prospective students, current students and alumni.

On-site registration and check-in for the Alumni Awards Luncheon will open at 11:30 a.m. and the program will begin at noon in the Grand Hall of the Tate Student Center. Online registration is open until April 10 at www.alumni.uga.edu/alumniawards for $35 per person or $275 per table.