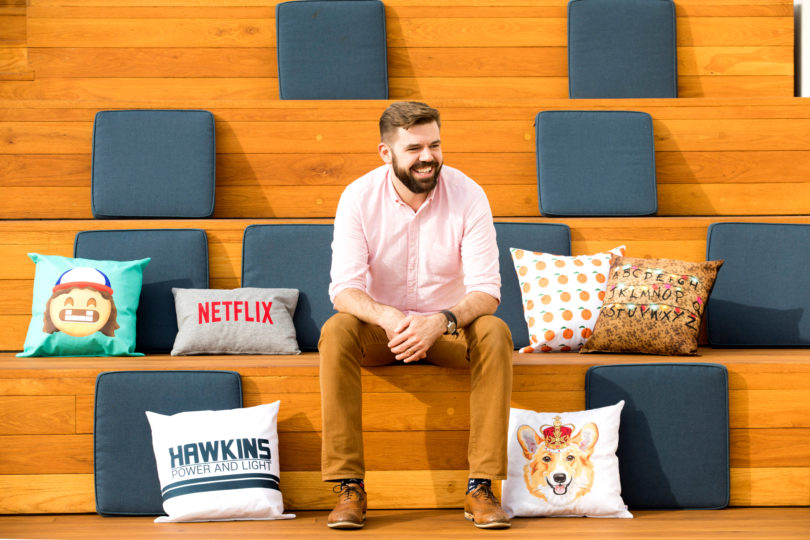 If you had asked a young Ted Donath ABJ ’03 what he’d be doing now, he would’ve guessed anchoring the news.

He loved that the news helped broaden his worldview and connected him with places beyond his hometown of Marietta. Although he didn’t follow the broadcasting path, he did find a job with a worldwide reach.

Donath works as a public relations director at Netflix, serving the U.S., Canada, Australia and New Zealand. With more than 118 million subscribers worldwide, Netflix is the world’s largest internet entertainment service and Donath and his team tell stories to media to get the public excited about it.

But what really gets people excited is talking to Donath about his job.

“No matter where I go, I mention the company I work for, and suddenly everyone’s telling me a story about what they’re watching, what they love, and what they hate,” he says.

“Entertainment serves a lot of purposes. It can make you laugh, cry, think, and feel things. It helps people connect. That’s really important, no matter how you receive your information.”

Before he landed at Netflix, Donath bounced around different industries, using his storytelling talents to promote businesses in fashion, beauty, travel and technology. He even helped with campaigns at the 2010 Winter Olympics and the 2012 Summer Olympics and helped facilitate the live broadcast of the Macy’s Thanksgiving Day Parade.

“I was fortunate enough to be able to work on some of the world’s largest events,” he says. “The scale of those events and the joy they bring to people is immeasurable.”

Today he lives in Los Angeles and wakes up each day ready for a new challenge in the unpredictable world of public relations, basing his storytelling on the ever-changing culture and outside world.

“That’s an exciting thing. Everything moves, and you’re always adjusting and pivoting.” Through the chaos, Donath has fallen in love with his position, and the company he now calls home.

“I love working at Netflix. I have the opportunity to work with some of the smartest and most inspiring people I have ever met,” he says. “We are all working together to influence culture. And we have really good breakfast burritos.”