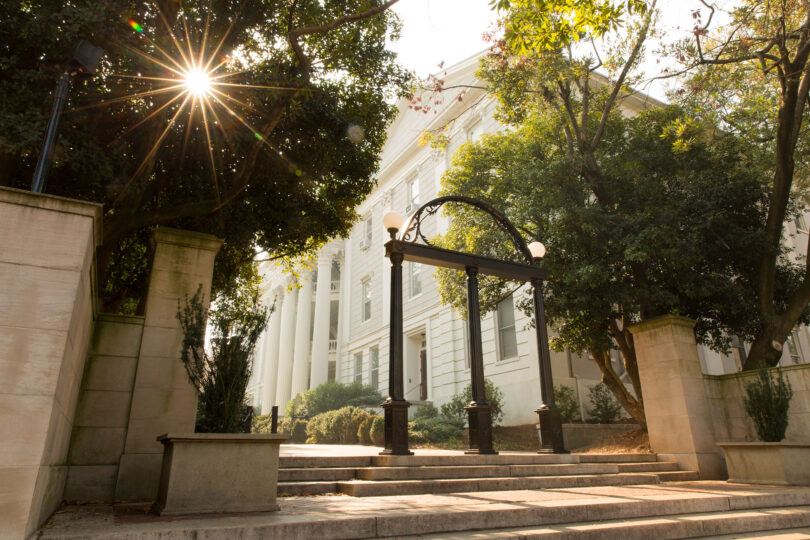 Outstanding alumni and friends recognized by the UGA Alumni Association

The University of Georgia Alumni Association has announced eight recipients of the 2021 Alumni Awards, an annual program dating back to 1936 that recognizes individuals and organizations who demonstrate a commitment to the university. The 2021 honorees are:

“The University of Georgia would not be the great institution that it is today without our outstanding alumni, friends and partners,” said President Jere W. Morehead.  “To this year’s class of award recipients—congratulations on this distinguished honor and thank you for all that you continue to do to support and advance UGA.”

The UGA Alumni Association’s oldest and highest honor, the Alumni Merit Award is presented to individuals whose outstanding community leadership and service to the university reflects UGA’s highest values.

The late Chester Davenport played a significant role in the history of the University of Georgia School of Law. Davenport, a 1966 law school graduate, was the first Black student to enroll in the law school and was a founding member and executive editor of the Georgia Law Review. Today, the UGA chapter of the Black Law Student Association bears his name. Throughout his career of more than 50 years, Davenport was a public servant and successful attorney. He worked as a tax attorney for the U.S. Department of Justice and as a legislative assistant for a California senator. He served on Jimmy Carter’s transition team and eventually co-founded a law practice in Washington, D.C. He was a member of the law school’s Board of Visitors and UGA Arch Foundation and remained a UGA supporter throughout his life.

The Honorable Brian P. Kemp, a 1987 graduate of UGA’s College of Agricultural and Environmental Sciences, is the 83rd governor of the state of Georgia. Prior to becoming governor, Kemp served as Georgia’s secretary of state from 2010 – 2018. He also served as a Georgia state senator from the 46th District from 2003 to 2007. Kemp was a home builder and developer before running for public office. As a third-generation Bulldog, he has hired fellow UGA graduates in both the private and public sector, and his family regularly supports UGA. His wife, Marty, graduated from UGA’s College of Family and Consumer Sciences, and two of his daughters currently attend the University. As Governor, he has been a champion for higher education and key University of Georgia initiatives.

Bonney Shuman co-founded Bar Code Systems in 1983, which became Stratix Corporation. The 1980 Terry College of Business graduate served as president and CEO until she sold the company and retired in 2011. A longtime supporter of UGA, Shuman is a past president of the UGA Alumni Association and now serves as treasurer of the UGA Foundation Board of Trustees. Shuman mentors UGA students through the UGA Mentor program. Her husband, Billy Shuman, also attended the University of Georgia. Their generous and numerous gifts to UGA have gone to support students, research and service. Both of their children, Billy Shuman Jr. (MAB ’18) and Mary Ellen (BBA ’17, JD ’20), have earned degrees from UGA, and Mary Ellen was also on the UGA Women’s Golf Team.

Dr. Libby Morris is receiving this year’s Faculty Service Award, which is presented to a faculty or staff member who has shown remarkable leadership in higher education. Morris earned a Bachelor of Arts in English from UGA in 1971. Since 1989, she has been a faculty member in the University’s Institute of Higher Education and has served as its director since 2006; she also holds the Zell B. Miller Distinguished Professorship of Higher Education. She served as vice provost for academic affairs from 2010 – 2013 and twice served as UGA’s interim provost. Libby Morris and her husband, Dr. Van Morris, a 1969 graduate, are also generous donors, giving back to their alma mater for more than 30 years. Their son, John Morris (BFA ’98), also attended UGA.

The Paris family is receiving the Family of the Year Award. Following in their father’s footsteps, the late Thomas Paris Jr., a 1961 graduate, and his sister, Joyce Paris (MED ’64, EDS ’70), were longtime donors to UGA. Paris Jr. and his surviving wife, Alice (a 1960 graduate), set a strong, philanthropic example. Their daughter, Elizabeth Paris, graduated from UGA in 1985 and her son, William Paris Brooks, is an alumnus. Elizabeth’s late husband, Jeff Hagood, and late step-son, Cole Hagood, both attended UGA. She is a donor and a past member of the Parents Leadership Council. Elizabeth’s brother, Trey Paris, a Double Dawg, has been a respected business leader and community advocate; he is now the managing director of Taylor English Decisions Government Affairs Practice. Trey (BBA ’84, MBA ’85) is an emeritus trustee of the UGA Foundation and a past president of the UGA Alumni Association. He and his wife, Sandra, have two children, Eliza Paris (BSFCS ’14) and Thomas Paris (BBA ’17, JD ’20).

Two Athens hospitals, Piedmont Athens Regional Medical Center and St. Mary’s Health Care System, are receiving the Friend of UGA Award, which is presented to a non-alumnus or organization that has devoted themselves to the greater good of UGA. Both hospitals support the UGA campus, the city of Athens and surrounding communities, and each of them plays an integral role in educating medical students enrolled in the Augusta University/University of Georgia Medical Partnership. Through the trials of the COVID-19 pandemic, the bonds between the University and these hospitals have strengthened, as they collaborate to help serve the health care needs of the community through service and outreach. Two senior leaders at these hospitals have been at the vanguard of these efforts—Michael Burnett, CEO of Piedmont Athens Regional Medical Center, and Montez Carter, president and CEO of St. Mary’s Health Care System.

Jonathan Jones, a 2013 UGA College of Engineering graduate, is this year’s recipient of the Young Alumni Award, which is presented to an individual who brings recognition and honor to UGA through outstanding leadership and service to the university, the community and his or her profession. As an engineer at Corteva Agriscience in Indianapolis, Jones focuses on solving complex challenges in agriculture. Jones serves on several boards, including the College of Engineering Advisory Board. He has earned numerous recognitions for his work, including the 2018 Black Engineer of the Year Eugene Deloatch Award and the 2018 UGA Engineering Young Alumni Impact Award. The UGA Alumni Association included him in the 2018 40 under 40. Jones is committed to giving back to his community and is paving the way for future scientists.

Due to ongoing public health concerns surrounding public gatherings, the annual Alumni Awards luncheon, which typically takes place in April, will not take place. The University will recognize and thank these outstanding honorees virtually.

“We are so proud of these outstanding alumni and supporters of the University of Georgia. We look forward to celebrating them throughout the spring semester,” said Meredith Gurley Johnson, executive director of the Alumni Association.

To learn more about these awards and past honorees, visit: https://alumni.uga.edu/alumniawards/