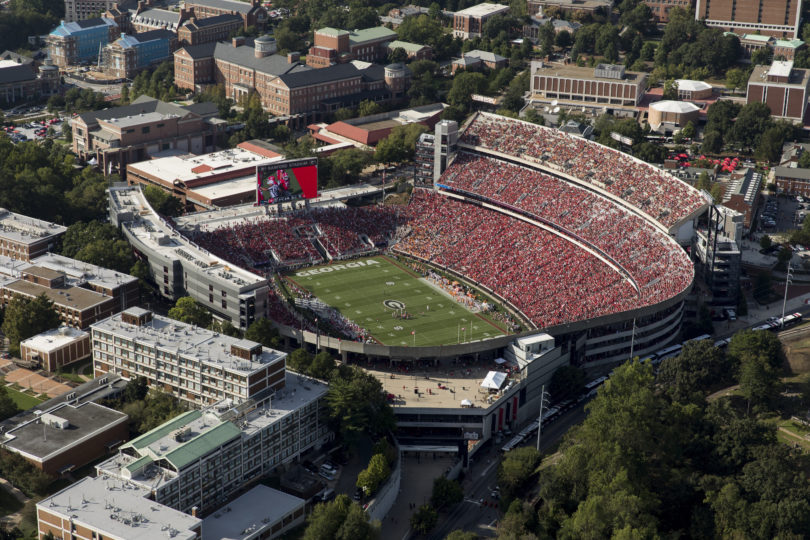 “Coach Dooley’s many contributions to this university can be seen across campus,” said Morehead, “from Georgia athletics, where he achieved unrivaled success, to the learning environment, where today many academic programs and initiatives bear his name, such as the Dooley Library Endowment Fund to the Dooley Professorship in Horticulture. The university community will continue to benefit from his service and dedication for generations to come.”

Pending approval of the plans, an official ceremony to dedicate Dooley Field will take place inside Sanford Stadium prior to the Bulldogs’ 2019 home opener on September 7.

“I can think of no better way to open the 2019 home football schedule than dedicating Dooley Field at Sanford Stadium,” said McGarity. “The event will be a moment for the entire Bulldog Nation to collectively say ‘thank you’ to a man who has devoted much of his life to making the Georgia athletics program one of the strongest in the nation.”

“I have immense respect and appreciation for Coach Dooley and all that he has accomplished at the University of Georgia,” said USG Chancellor Steve Wrigley. “The Board of Regents and I look forward to reviewing the proposal to name Dooley Field during our May meeting.”

“I am pleased that we will have an opportunity to recognize Coach Dooley as we launch the next football season,” said Georgia Head Football Coach Kirby Smart. “We will use this exciting development to galvanize private support around our capital fundraising efforts to expand Butts-Mehre for our football program.”

Dooley has received a number of high-profile national awards and honors over the years. In 2016, he received the John Wooden Citizen Cup Award for positive influence on the lives of others. In 2010, he received the Bear Bryant Lifetime Achievement Award which recognizes excellence in coaching on and off the field, and in 2004 he was honored with the James J. Corbett Memorial Award for his devotion to intercollegiate athletics. Dooley was inducted into the National College Football Hall of Fame in 1994. He also has been inducted as a Georgia Trustee by the Georgia Historical Society.

“It’s a great day for the University of Georgia and its football program,” said former Georgia Bulldogs great and 1982 Heisman Trophy winner Herschel Walker. “Coach Dooley was such a great mentor to me during my career at Georgia and beyond. Congratulations to Coach on this well-deserved honor.”

“Coach Dooley is one of the most celebrated leaders in Georgia athletics,” said Governor Brian P. Kemp. “He knew how to win on the football field and inspired generations of young men and women to live with purpose, passion, and integrity. I applaud the University of Georgia for honoring Coach’s decades of service and success. I look forward to watching the Dawgs compete on Dooley Field in the near future.”