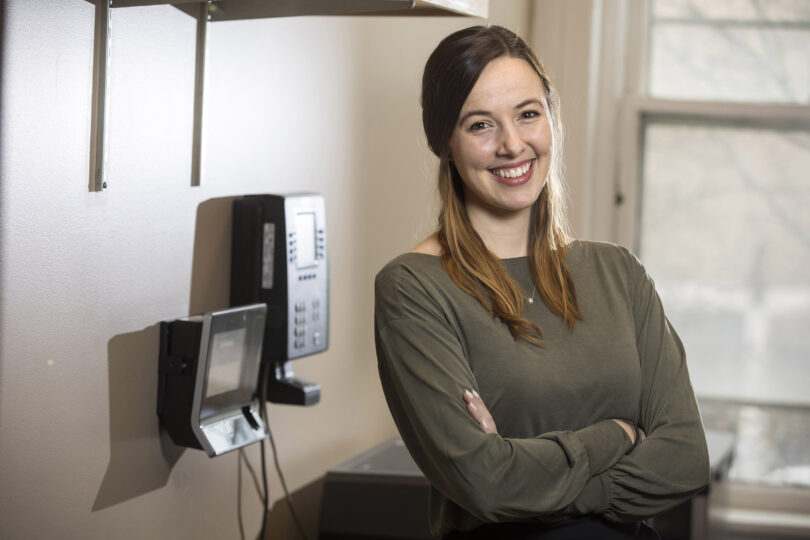 Amanda Ganger’s career has all added up to her current position. 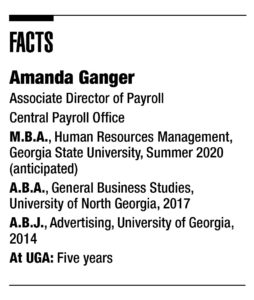 “I always try to keep a positive attitude about anything that happens,” she said. “Work hard and never get discouraged. That project you’re asked to serve on that seems like it will never end will ultimately be a growing experience.”

Ganger said she balances her budget for fun and has always been good with numbers. Her position as associate director of payroll allows her to combine her affinity for numbers with her desire to help others by making sure everyone is paid accurately and on time.

“I love it when you add things up, and they equal, and there’s a correct answer,” she said. “You’re helping real people get paid.”

After graduating from UGA with her bachelor’s degree, Ganger was hired as a cashier at the Veterinary Teaching Hospital. About a year later, she transferred to the hospital’s human resources department. In that position, she worked closely with the university’s Central Payroll Office and eventually took a position as a payroll specialist there.

“I feel very fortunate for the opportunities I’ve been given,” she said. “People notice when you’re working hard and giving it your best.”

Ganger was asked to be the time and labor functional lead on the OneSource project, which was implemented in December 2018. During that process, she was able to have a hand in building UGA’s system and a voice in decisions made at the University System of Georgia level.

“It was a huge learning opportunity,” she said.

Now, Ganger oversees payroll when it runs every other week. She’s always listening to feedback on the new system and submits change requests for OneSource and comes up with ideas for new functionality that could enhance the user experience. She then tests those changes and ideas and helps coordinate release dates and other details.

“I think our users—our employees and staff—pay more attention in the system,” she said. “That’s been a great help in creating a more cohesive system.”

Ganger takes the lessons she learned from the OneSource project with her. For example, she said that while her team wasn’t able to incorporate everything they’d like, it’s important to see the silver lining and focus on the good things the compromises accomplished. Sharing input continues to be crucial. In fact, two of the change requests put forth by Ganger already have been implemented. She also said that it’s OK to not have an immediate answer, especially on new projects, because that’s how both the people and the system grow. But the most important lesson is that every detail matters.

“The biggest surprise was how little things you might not think are important are actually huge. The smallest detail can have the biggest impact,” she added. “We’re all learning together.”

In addition to working on technical improvements, Ganger is also assisting with policy cleanup related to OneSource. Eventually, she would like to branch out into all aspects of payroll, including accounting and taxes.

“There is so much more growth I see happening in this system,” she said. “I’m so connected to it at this point, and I definitely want to see it through.”

Changes in Ganger’s own life seem to follow changes in her career. She began graduate school just as the university transitioned to OneSource, and she’ll finish that degree and get married this spring.

Outside of work, Ganger enjoys reading, crafting and scrapbooking. She also hopes to travel more.

“It’s so important to set goals and understand your value and your worth,” she said.