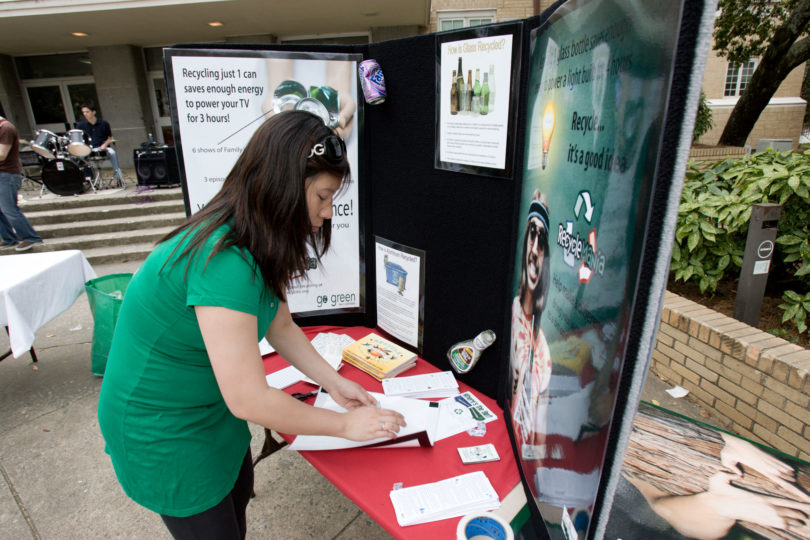 More than 271 tons-23 times the weight of the entire 2008 UGA football team-of glass, plastic, steel, paper and cardboard materials were recycled by the University Housing community, in conjunction with the Physical Plant during a recent nationwide recycling contest.

For the first time, UGA participated in Recyclemania, a 10-week collegiate recycling contest, which aims to “increase student awareness of campus recycling and waste minimization.” UGA entered the contest, according to Andrew Lentini, the new recycling coordinator at Physical Plant, because of the “opportunity for student involvement in a worthwhile effort to reduce waste and have fun at the same time.”

First held in 2001, the contest now has more than 200 participating institutions.

UGA accumulated 38.04 pounds per person in the Per Capita contest, which measures the total weight of paper, including, magazines, newspapers and office papers, beverage containers, including aluminum, steel and glass cans and cardboard collected on a per person basis. It also collected 543,260 pounds for the Gorilla Prize category, which recognizes the college or university that collects the most recyclables.

Several events were held at UGA in conjunction with Recyclemania, including Clean Out Your Files Day on March 28. The event was an opportunity to give the UGA community information on how and where to recycle, and students, staff and faculty brought paper products to recycle.

Lentini said that for next year’s competition, the university will expand its recycling initiatives.