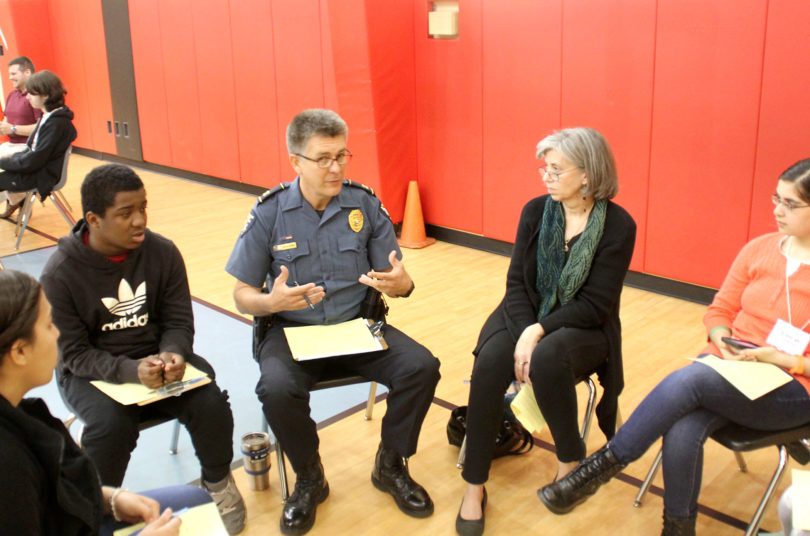 Captain Mark Sizemore with the Athens-Clarke County police department talks with members of the Athens community at an event earlier this year.

Athens, Ga. – In a time of heightened sensitivity between police and the public, the University of Georgia has launched a program to facilitate conversations between youth and law enforcement officers to address conflicts before they escalate into violence.

The idea for “Blue and You,” a forum to bring the community together with police to talk about divisive issues in a safe environment, was initiated by Brian N. Williams, an associate professor of public administration in the UGA School of Public and International Affairs. He turned to the J.W. Fanning Institute for Leadership Development to develop a model for the program.

The initial forum, in April, brought together law enforcement officials from the Athens-Clarke County and UGA police departments, the Clarke County Sheriff’s Department and Clarke County School District, and youth from area youth development organizations, including the Boys and Girls Clubs of Athens. The Fanning Institute, a UGA Public Service and Outreach unit, received funding from the UGA President’s Venture Fund to help cover the costs of the program.

Prior to the forum, Fanning faculty members trained 25 local high school and UGA students to serve as moderators. The model for the forum is called reflective structured dialogue, which was created by family therapists to help people who are locked in unproductive communication open up to new pathways for understanding. During this dialogue all participants are given time to share their perspectives on divisive issues and reflect on those personal comments while avoiding debate.

“We have to figure out a way to work together,” said Raye Rawls, a senior public service associate at the Fanning Institute who, with Fanning Public Service Assistant Emily Boness, implemented the dialogue. “We have to create a space where everyone has an opportunity to speak and express their views and feelings and to hear the views and feelings of others.”

Some of the discussion centered on stereotypes. Athens-Clarke County Police Chief Scott Freeman emphasized that police officers should not be seen as an “occupying military force” or assumed to be racists. A woman at the forum started to interrupt him, then later apologized and said she hadn’t expected to hear Freeman speak so candidly about race. The calm discussion was in contrast to the heated debates that often accompany conversations about race.

“In the facilitated session it was emphasized that everybody is equal,” Freeman said. “We need to have open dialogue. I think it gave the other participants a sense that they were on my level, which is really the reality anyway.”

“It allowed (the teenagers), from my perspective, to take ownership of some of the interactions, some of the responses,” Freeman said. “I think they took it serious and what a wonderful experience for them to walk away, knowing they helped facilitate that.”

P.J. Kennedy, a sophomore at Clarke Central High School, helped moderate the sessions and knew that part of his responsibility would be keeping people on point and on time. Even if the person who went over the allotted time was Freeman.

“I didn’t want to interrupt him but I had to,” Kennedy said. “That’s the nerve-wracking part. I just had to do it so everyone else would have their turn.”

He left the forum assured that local law enforcement officers were not a threat to the community.

“They’re here to protect you and help you live your daily life,” Kennedy said.

Williams wants to see the RSD program serve as a model for other cities and counties across the state and nation, and is pursuing grants that would help fund those opportunities. Fanning Director Matt Bishop said the institute is willing to facilitate dialogue in other communities if invited.