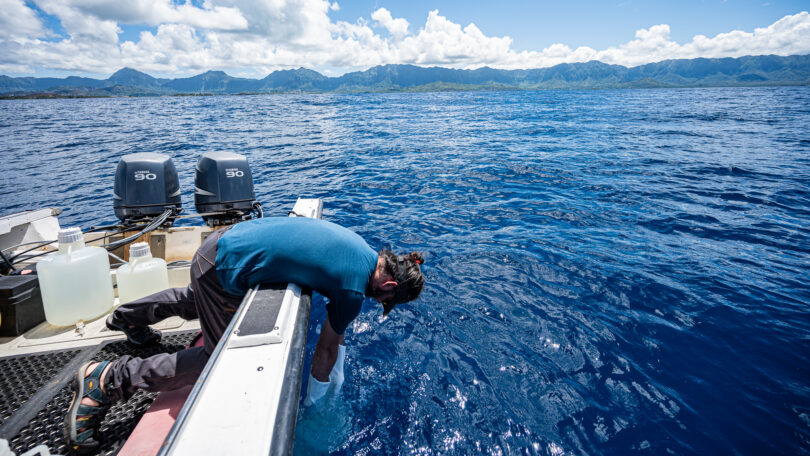 The center will be devoted to studying ocean’s microscopic world

The University of Georgia, along with the Woods Hole Oceanographic Institution, will co-lead a new National Science Foundation Science and Technology Center that will pursue and promote a deeper understanding of the microbial worlds and chemical processes that swirl throughout the Earth’s oceanic ecosystems.

The new Center for Chemical Currencies of a Microbial Planet (C-CoMP), based at Woods Hole in Falmouth, Massachusetts, is one of six centers the NSF announced on Sept. 9. Funded by NSF for $25 million over five years (with an option for five more), the new center comprises Woods Hole, UGA and 11 other universities and research institutions around the country.

At a time when increased carbon dioxide levels in the atmosphere are linked to rising ocean temperatures, C-CoMP will seek to better understand the behavior of the bioreactive molecules and ocean microbes that are involved in one-quarter of the Earth’s annual organic carbon cycle.

The importance of microbes

“We can’t actually watch what ocean microbes are doing because of their extremely small size, yet they are literally driving the major carbon and nutrient cycles that keep the planet alive,” said Mary Ann Moran, Regents’ Professor in the Franklin College of Arts and Sciences’ department of marine sciences, who will serve as C-CoMP’s co-director and research coordinator. “Better understanding of this network of microbes and chemicals will improve our ability to predict the way the ocean works, now and in the future.”

C-CoMP will integrate research and educational activities and support interdisciplinary science teams to close gaps in what we know about the molecules that serve as the “currencies” of elemental transfer within marine microbial communities and between the ocean and atmosphere. The new center will leverage emerging technologies to isolate and identify molecules produced by marine microbes, to link physiology to function across groups of microbes, and to leverage existing datasets of marine microbial and environmental parameters.

“A large percentage of the Earth’s carbon cycles through microorganisms that live near the surface of oceans,” said Art Edison, GRA Eminent Scholar in UGA’s Complex Carbohydrate Research Center and one of C-CoMP’s senior research personnel. “We know very little about this carbon flux, because it is really hard to study. We will be able to leverage our recently funded Network for Advanced Nuclear Magnetic Resonance to help. My lab has worked on smaller-scale projects, and C-CoMP will bring in more collaborative expertise and greatly expand the scope and impact of our work.”

“If we don’t know the resilience of this chemical-microbe network, we’re missing a pretty fundamental mechanism in the way the planet works,” said Elizabeth Kujawinski, senior scientist at WHOI and director of C-CoMP. “The overarching questions are: What are the key molecules within this carbon pool, how quickly do they cycle, and what is the pool’s sensitivity to the changing climate?”

Other science themes include understanding the rules of the chemical-microbial network, including the connections between different organisms, and understanding the network sensitivity and feedbacks on climate. Another major emphasis of C-CoMP will be working to expand ocean literacy among students of all ages and to broaden workforce diversity in the ocean sciences.

“I am excited about C-CoMP because it will integrally involve students at all levels as the next generation of scientists,” said Erin Dolan, professor of biochemistry and molecular biology, Georgia Athletic Association Professor of Innovative Science Education, and C-CoMP senior researcher. “Center members are eager to work with a diverse group of young people to help them learn about the importance of oceans in carbon flux and the power that interdisciplinary teams have to address the most pressing problems of our time.”