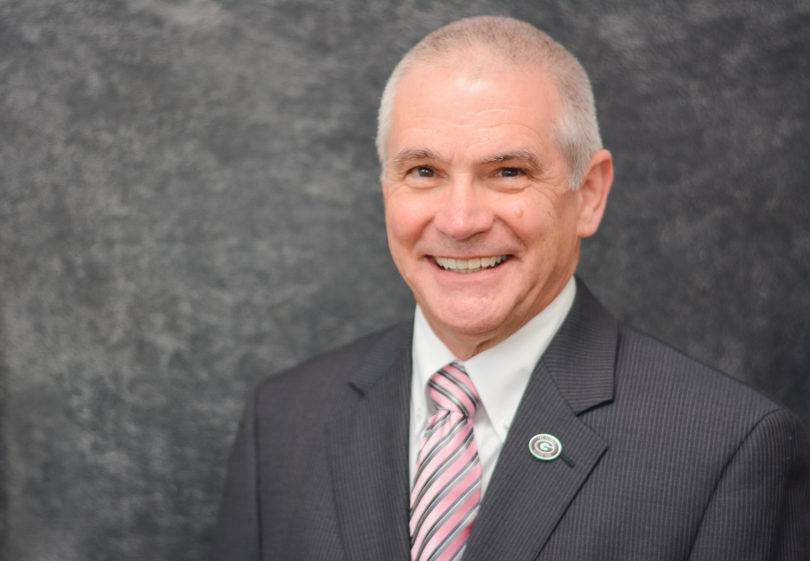 Athens, Ga. – Five University of Georgia College of Education graduates were recognized for their career achievements and community leadership with 2014 Distinguished Alumni Awards at the college’s second annual Donor Appreciation and Alumni Awards Dinner held earlier this month at the UGA Center for Continuing Education.

Myers, a 1991 doctoral graduate from Sylvania, spent his career teaching and working with children, starting in Effingham County and the Marvin Pittman Laboratory School at Georgia Southern University, and then in Griffin-Spalding County Schools. He spent his summers on staff at the state FFA-FHA camp in Covington and became assistant camp director in 1984.

Myers later returned to Griffin-Spalding schools as an assistant principal, then moved to Screven County as principal of the elementary school there.

At the time, the rural district was known for its high poverty rate and majority-minority student population. But the statistics didn’t mean the district couldn’t be successful. Myers established the state’s first full-time elementary technology lab as principal, and then became superintendent. He created a partnership with Georgia Southern for what is believed to be the first professional development school district in the country. The elementary and middle schools became Title I Distinguished Schools, and soon all schools in the district were receiving state and national recognition for students’ high achievement. The high school’s graduation rate is now over 82 percent, up from 57 percent nearly 10 years ago.

After enrolling at UGA to pursue a degree in philosophy, Altman delayed his graduation for several years in order to take extra classes in English, comparative literature and classics. After completing his master’s degree in education in 2006, he began teaching English at Clarke Central High School in Athens, where he remains today. Four years ago he moved from the freshman academy to teaching American literature and Advanced Placement English, where he incorporates philosophical perspectives on intellectual history and rhetoric into his lessons.

His classes have become a safe space to discuss language identity and social justice issues, helping students understand literature from social and political contexts. Altman also is a strong and unapologetic advocate for the rights of undocumented students in Georgia, work which recently won him the Kenneth Goodman “In Defense of Good Teaching” award from the University of Arizona with colleague Matthew Hicks. He has given presentations on the role of teachers in student advocacy and literacy issues at colleges and forums across the country.

Shelton focuses on empowering individuals and couples through private, one-on-one counseling and creating systemic change at large-scale university settings, where she trained hundreds of students, faculty and staff.

While at Georgia Tech and also in private practice, Shelton stayed active in several professional organizations, including co-chairing the Early Career Psychologist Transition Project for the American Psychological Association Society of Counseling Psychology. Shelton co-authored a textbook on university counseling that will be published in December 2014 and has about 20 other publications focused on diversity and social justice. In her private practice, Shelton specializes in working with underserved populations including ethnic minorities and sexual/gender minority clients. She said her interest in working with underserved populations grew while she was a UGA student, where courses on diversity and gender, her work with women in a local homeless shelter, and experience leading a gender-issues group pushed her own self-exploration of culture and responsibility.

She recently relocated to Dallas, Texas, where she keeps a private practice and is a member of the Texas Psychological Association Social Justice organization.

Cornileus, of Hartford, Connecticut, has taken her talent for teaching and turned it into managing talent.

Cornileus, a 2004 master’s graduate and 2010 doctoral graduate, is the vice president for learning and organizational development at ESPN, where she is part of the sports network’s human resources leadership team. She is responsible for the global learning, talent management and organizational development strategies for ESPN employees around the world.

Teaching was a passion for Cornileus when, armed with a degree in telecommunications, she spent eight years working in various school districts. She transitioned from teaching to the corporate setting when she became the manager of training and quality assurance for the telecommunications company Innotrac Corporation. After becoming vice president for training and organizational development for Aegis Communications Group, she earned her master’s degree and moved to Turner Broadcasting System as director of executive development and organizational effectiveness. She returned to UGA for a doctorate in adult education/human resources and organizational development before moving to her current job at ESPN.
Cornileus also supports several professional and civic organizations with her time and talents. She serves on the board of directors for the Urban League of Greater Hartford, mentors high school students and supports the Boys & Girls Clubs of Hartford.

Service Award
For his service to the community and commitment to education, Mark Slonaker, a 1980 graduate, was recognized with the 2014 Service Award.

Along with his role as head of the UGA Athletic Association’s fundraising arm, he shares his sports knowledge as a guest lecturer for sport management majors. This experience has led him to mentor several students and even take on a student as part of his practicum.

During his years at UGA, Slonaker lettered for the basketball team and was a co-captain of coach Hugh Durham’s first team at Georgia in 1979. He held several collegiate coaching positions after graduation, ending with an 11-year stint at Mercer University and the school’s first Atlantic Sun championship.

Slonaker, of Watkinsville, took over the Georgia Bulldog Club in 2011, and since then has started several programs, including a young alumni ticketing program, an endowment program, fundraising plans for Foley Field and the Equestrian Center facility, and a restructured scholarship program.

He says his passion and love for the sport management field were inspired by the professors he had during his time as an undergraduate in the College of Education. “Their commitment to our profession motivates me to continue giving back to our future leaders in the sport management and physical education fields,” he said.