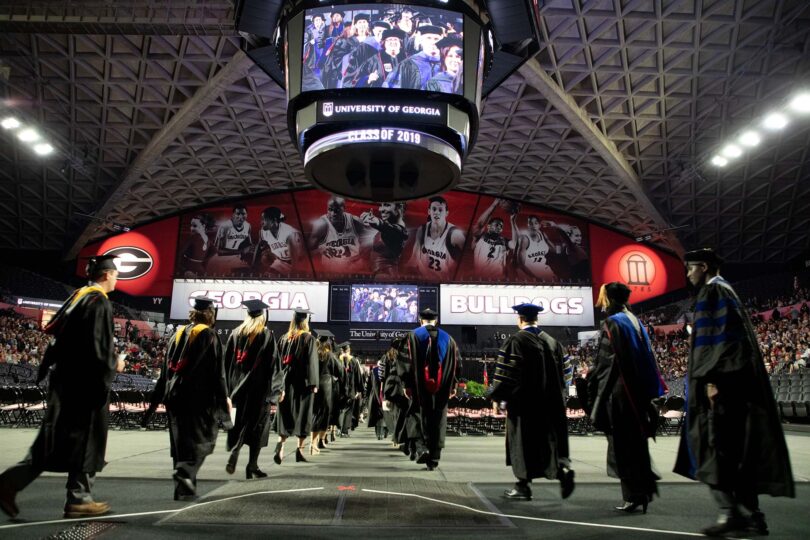 The University of Georgia will welcome its newest alumni on Dec. 16 as 1,681 undergraduates and 1,521 graduate students—a total of 3,202—have met requirements to participate in the university’s fall Commencement ceremonies.

Womack assumed his current role at Georgia Power in 2021. He also served as executive vice president and president of external affairs for Southern Company where he led overall external positioning and branding efforts including the company’s public policy strategies and oversaw the company’s governmental and regulatory affairs, corporate communication initiatives and other external and strategic business engagements.

Prior to joining Southern Company, Womack worked on Capitol Hill for the U.S. House of Representatives in Washington, D.C. He served as a legislative aide for former Congressman Leon E. Panetta and as staff director for the Subcommittee on Personnel and Police for the Committee on House Administration.

UGA will recognize 22 students as First Honor Graduates for maintaining a 4.0 cumulative GPA in all work attempted at UGA as well as all college-level transfer work prior to or following enrollment at the university.

An estimated 344 doctoral candidates and 1,177 master’s and specialist degree students will be eligible to walk in the graduate ceremony at 2:30 p.m. in Stegeman Coliseum. Alan Darvill, Regents Professor Emeritus of Biochemistry and Molecular Biology, will address the graduates and guests.

Darvill is also Director Emeritus of UGA’s Complex Carbohydrate Research Center, which he founded with Peter Albersheim in 1985.

Darvill was elected Fellow of the American Association for the Advancement of Science in 2010 and received the Lothar Tresp Outstanding Honors Professor Award in 2012. He served on the National Academy of Science committee to review “Transforming Glycoscience: A Roadmap to the Future,” published in 2012 and co-edited the third edition of “Essentials of Glycobiology” in 2016. From 2007 to 2017, Darvill was UGA’s lead for the Department of Energy-funded BioEnergy Science Center. He helped with the formation of the Center for Molecular Medicine along with the funding and preparing of the construction of its home—a 43,000-square-foot building attached to the CCRC.

Though retired, Darvill contributes to the CCRC, which has become internationally recognized as a leading research center in complex carbohydrate science under his tenure.

The clear bag policy will be in effect for both ceremonies. Parking is free and available on a first-come, first-served basis. Suggested parking areas include South Campus Deck (S11), Carlton Street Deck (S15), and Foley Field Lot (S14).