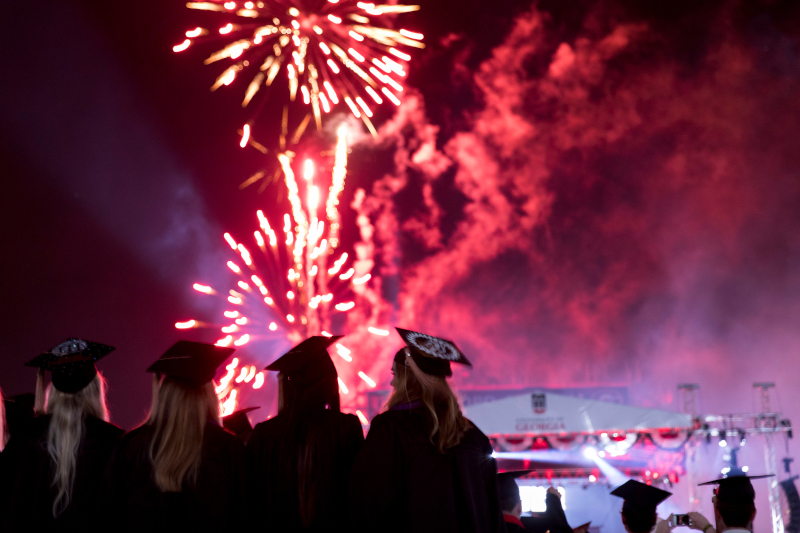 The University of Georgia will welcome its newest alumni on May 13 as 6,054 undergraduates and 1,549 graduate students—a total of 7,603—have met requirements to participate in the university’s spring Commencement ceremonies.

The undergraduate ceremony is scheduled for 7:30 p.m. in Sanford Stadium. Ed Bastian, chief executive officer of Delta Air Lines, will give the address.

UGA will recognize 109 students as First Honor Graduates for maintaining a 4.0 cumulative GPA in all work attempted at UGA as well as all college-level transfer work prior to or following enrollment at the university.

An estimated 263 doctoral candidates and 1,286 master’s and specialist degree students will be eligible to walk in the graduate ceremony at 9:30 a.m. in Stegeman Coliseum. Jennifer Frum, UGA’s vice president for public service and outreach, will address the graduates and guests.

Frum became UGA’s fourth vice president for public service and outreach in 2012 and the first woman to serve in the role. She provides institutional leadership for UGA’s eight diverse public service and outreach units, which contribute in numerous ways to Georgia’s short- and long-term prosperity. The UGA Office of the Vice President for Public Service and Outreach has an estimated $753 million annual economic impact on Georgia.

The clear bag policy will be in effect for both ceremonies. Parking is free and available on a first-come, first-served basis.

For the graduate ceremony, suggested parking areas include South Campus Deck (S11), Carlton Street Deck (S15), and the Foley Field Lot (S14). Parking for guests with disabilities is available in the Hoke Smith Annex lot (S12), which is adjacent to Stegeman Coliseum.

For the undergraduate ceremony, suggested parking areas include Hull Deck (W05), North Campus Deck (N04), South Campus Deck (S11), and the Performing Arts Center Deck (E20). Parking for guests with disabilities is available at the East Campus Deck (E04). An ADA accessible shuttle will be available from that parking area to transport guests to the stadium.