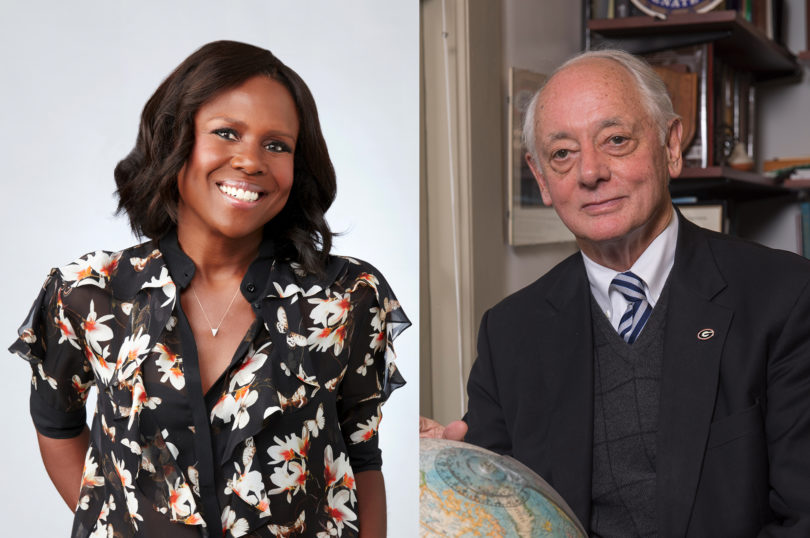 ABC News correspondent and UGA alumna Deborah Roberts will give the University of Georgia’s spring undergraduate Commencement address May 10 at 7 p.m. in Sanford Stadium.

Loch Johnson, Regents Professor of Public and International Affairs at the University of Georgia, will deliver the spring graduate address on the same day at 9:30 a.m. at Stegeman Coliseum. Tickets are not required for either ceremony.

Since graduating from UGA in 1982 with a degree in broadcast news from the Grady College of Journalism and Mass Communication, Roberts has risen through the ranks of television news, received numerous awards and been a regular reporter and contributor for programs such as “Dateline NBC,” “20/20,” “Nightline,” and “Good Morning America” to name a few.

Born in the small town of Perry, Georgia, Roberts was one of nine children. She began her post-college career at WTVM-TV in Columbus, Georgia, and subsequently worked at WBIR-TV in Knoxville, Tennessee, where she gained notice for her coverage of the state legislature.

Roberts further honed her reporting skills as bureau chief of WFTV-TV, the ABC affiliate in Orlando, from February 1987 to May 1990, where she also served as the station’s field anchor at the Kennedy Space Center and co-anchor of the weekend news.

In 1990, Roberts began her network career with NBC News as a general assignment correspondent. She covered stories in the Southeast from the Atlanta and Miami bureaus and was dispatched to Saudi Arabia and Kuwait reporting on the lead up to the Persian Gulf War. Roberts was later named a magazine correspondent for “Dateline NBC” and reported from Barcelona during the 1992 Summer Olympic games, earning an Emmy nomination for this coverage.

In 1992, she received a University of Georgia Distinguished Alumnus Award, presented annually to recent graduates who have excelled rapidly in their professions.

Roberts joined ABC 20/20 in 1995. Since then her curiosity has taken her around the world, from Bangladesh to report on women’s maternal health to Africa where she has traveled extensively, telling stories about the HIV/AIDS crisis and an Emmy-winning report on a woman who discovered her long lost mother in an African village. Roberts has won numerous awards for her work including a Clarion award for coverage of abuse within the Amish community.

In 2006, Roberts delivered UGA’s Holmes-Hunter lecture, and in 2016 she presented an Alumni Seminar. Earlier this year, she participated in a panel discussion entitled “Grady Greats: A Conversation on the Enduring Values and Power of Journalism.”

Johnson, who also holds the title of Josiah Meigs Distinguished Teaching Professor, is an accomplished scholar in political science, with numerous awards for his teaching prowess and research.

From 1975 on, Johnson also served as a political consultant and congressional staff member, pushing for increased oversight of intelligence agencies. He was Special Assistant to the Chairman of the U.S. Senate Select Committee on Intelligence, which investigated the nation’s spy agencies and led to the establishment of oversight committees in the Senate and the U.S. House of Representatives to monitor intelligence activities.

He became a member of the UGA faculty in the Department of Political Science in 1979, becoming a full professor in 1985. He took a year’s leave from the university in 1995 to work on the Aspin-Brown Commission on Intelligence. He has also taught at Yale University and Oxford University as a Distinguished Visiting Professor, and he has presented addresses on national security and foreign policy topics at over 150 colleges and universities in North America, Europe, and New Zealand.

During his time at UGA, Johnson has been involved in both local and national politics, including writing Friend of the Court petitions in intelligence-related court cases, serving as a member of the Georgia State Board of Elections and leading the SPLOST (Special Purpose Local Option Sales Tax) campaign to finance a new Cedar Shoals High School and renovate public schools throughout Athens-Clarke County.

Johnson will retire at the end of the spring semester after more than 40 years at UGA.