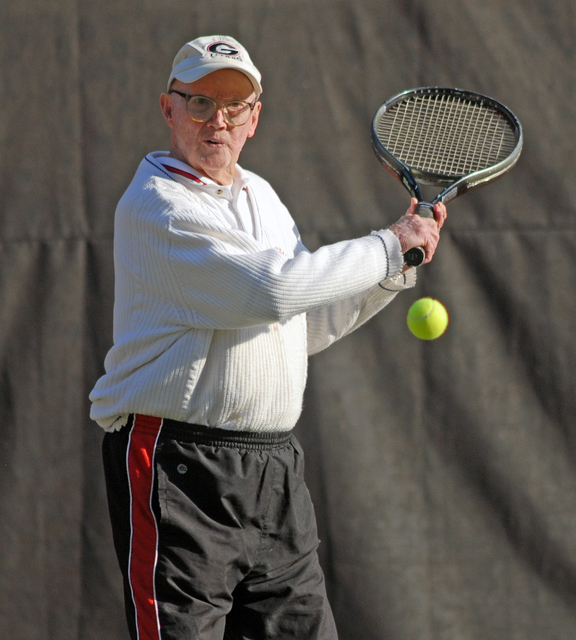 An Athens native, Magill began his 60-year association with UGA athletics as a baseball batboy in the 1930s and continued in numerous roles until his retirement in 1995.

“Dan Magill was the consummate champion of the Georgia athletic program and had a positive impact on the lives of many individuals,” said UGA President Jere W. Morehead. “I join all Bulldogs in mourning his passing.”

Magill retired as tennis coach following the 1988 season after leading the tennis program for 34 years and becoming one of the most influential men in the history of collegiate tennis. During his long tenure with UGA, Magill also served 27 years as sports information director and 25 years as secretary of the Georgia Bulldog Club, which he founded in 1953.

In 1996, Magill was inducted into the UGA Circle of Honor, the highest honor for former coaches and athletes at the university, and was a recipient of the 1994 Bill Hartman Award, which goes annually to a former athlete or coach who has made a significant impact in his chosen career. He also was a member of the National Collegiate Tennis Hall of Fame, the State of Georgia Sports Hall of Fame and the Southern Tennis Hall of Fame.

During his career as tennis coach, Magill compiled a record of 706 wins and 183 losses, making him the all-time winningest coach in NCAA Division I history at the time. His teams won a record 13 Southeastern Conference outdoor championships and eight indoor league titles. He won two NCAA national championships in 1985 and 1987.

The family asks that those wishing to honor Magill’s memory do so with a gift to the UGA tennis program, the ITA Hall of Fame or the Dan Magill Sports Journalism Chair at the Grady College of Journalism and Mass ­Communication all in care of the University of Georgia Foundation, 394 S. Milledge Ave., Athens, GA 30602.