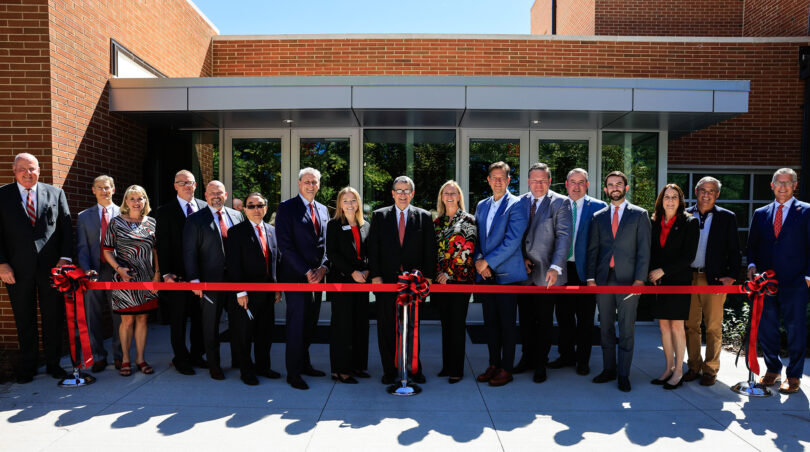 The University of Georgia held a ribbon-cutting ceremony to celebrate the completion of a four-year renovation of the Driftmier Engineering Center on Friday, Sept. 23.

“We are grateful for the strong support of our state leaders and the generous contributions of the College of Engineering’s corporate partners and alumni, which were instrumental to the renovation’s success,” said UGA President Jere W. Morehead. “I also want to congratulate Dean Don Leo and all of the members of the college on 10 years of tremendous achievements that have increased UGA’s capacity to improve lives and strengthen communities throughout our state, nation, and world.”

The renovation developed new instructional spaces, student commons, a multi-purpose classroom and offices for faculty and staff. A primary entrance on the north elevation was added to promote safer, faster and ADA-accessible access from campus transport. The facility also houses the college’s Engineers Education Institute to evaluate and enhance engineering pedagogy and professional practice protocol.

“Our college prides itself on creating a thriving community of learning, discovery and innovation,” said College of Engineering Dean Don Leo. “And now we have spaces that represent those values.”

The Driftmier Engineering Center has served as the home of engineering at UGA since 1966. The 110,000-square-foot building was originally designed to house agricultural engineering programs. Now, it serves as the instructional hub for the rapidly expanding College of Engineering. In 2011, the year before the college was established, enrollment in engineering at UGA totaled approximately 600 students. This fall, there are nearly 2,500 students, and engineering has become a high-demand major — students must apply to enter the college.

Originally known as the Agricultural Engineering Building, the facility was renamed in 1982 for Professor Rudolph Driftmier, a College of Agriculture faculty member from 1930 to 1965, who led the department and then the division of agricultural engineering for most of those years.

A working engineer, Driftmier partnered with Roy Hitchcock, an architect, to design and oversee construction of more than 15 buildings at UGA, including many of the federally funded Public Works Administration buildings constructed in the late 1930s. Driftmier also was the supervising engineer for the University System of Georgia. Along with Hitchcock, he helped create 80 buildings at 16 different schools in the system.

“The investment from the university, the state of Georgia, our corporate partners, and alumni in the renovation of Driftmier will be repaid many times over in the form of skilled engineers who can work effectively with a wide range of people to solve some of the world’s greatest problems,” Michaud said. “I will be so proud to be one of them.”