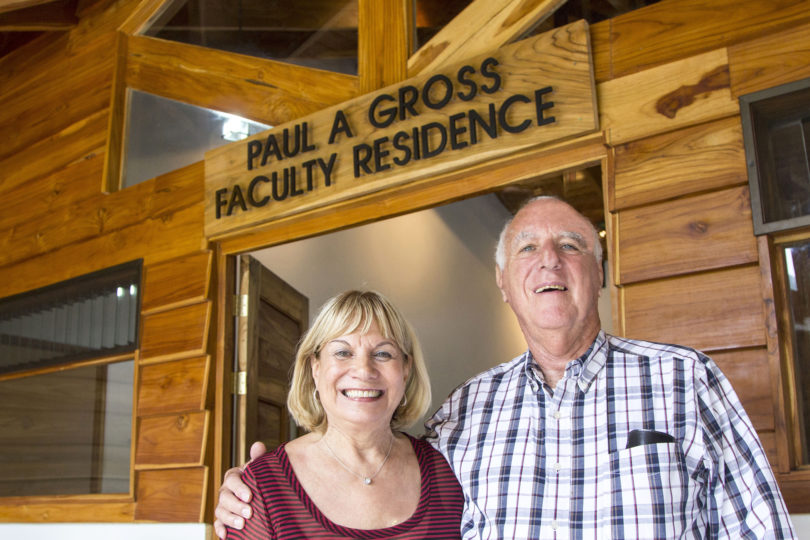 Roni and Paul Gross at the new faculty residence facility

New facility is named in honor of donor Paul A. Gross

Athens, Ga. – The newly-constructed faculty residence facility on the University of Georgia’s campus in San Luis, Costa Rica was dedicated July 26 by a group of local dignitaries, and administrators and staff from the university.

Named in honor of Paul A. Gross, a 1961 UGA graduate, the new facility honors his support of the international residential center and the UGA Costa Rica Program in general.

Gross is a longtime supporter of UGA Costa Rica. He endowed the Paul A. Gross Undergraduate Student Support Fund in the University of Georgia Foundation with a primary objective of raising awareness of UGA Costa Rica and the opportunities it provides for students, faculty and the adjoining communities.

He also established the fund with an eye toward attracting gifts from other donors to support UGA Costa Rica’s educational endeavors and associated activities. As part of a second gift to UGA Costa Rica, Gross offered an incentive whereby he would match the first $50,000 in donations to the Friends of Costa Rica Endowment on a dollar-for-dollar basis through year’s end.

“We are so very grateful to Paul Gross for his support of our programs,” said Quint Newcomer, director of UGA Costa Rica. “We were honored to name the faculty residence in his honor and look forward to having him visit us frequently in the years ahead.”

On hand for the ribbon cutting and dedication were Paul Gross and his wife Roni as well as a host of government and business leaders from Costa Rica including; Alberto Lopez, director of the Costa Rican Tourism Institute’s Certified Sustainable Tourism program; Beverly Thacker, cultural affairs officer at the U.S. Embassy in San Jose; Noe Vargas, president of the local San Luis Development Association; Roberto Cambronero, general contractor for the construction project; Pablo Gonzales and Rosa Mayorga, engineers and principals of Biosinergia, the engineering firm that designed UGA Costa Rica’s biodigester; and Randy Chinchilla, administrative director of the Bellbird Biological Corridor.

“Mr. Gross’ generosity is a great example of how donors can make a difference in the lives of deserving students,” Newcomer said. “In the years to come, there will be many students who will be able to travel to, and study at the University of Georgia Costa Rica campus that might not otherwise have been able to experience the unique learning environs offered in Central America.”

About UGA Costa Rica
UGA Costa Rica is a 155-acre, international residential and classroom facility located in San Luis, Costa Rica at the base of the Monteverde Cloud Forest. It is owned by the University of Georgia Foundation and hosts education abroad programs operated by UGA and other universities around the world. UGA Costa Rica is a center for research, instruction, symposia, and ecotourism. About two dozen annual degree credit programs are conducted on the campus during the fall, spring, May and summer terms. UGA Costa Rica works with more than 60 UGA faculty members across a wide range of academic disciplines. For more information on UGA Costa Rica, see http://www.dar.uga.edu/costa_rica/.