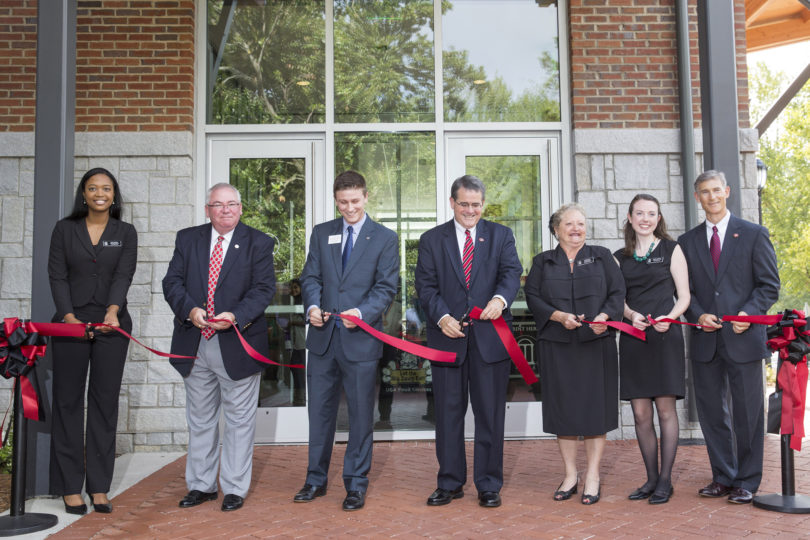 Dedicating Bolton Dining Commons with a ribbon cutting are

Athens, Ga. – The University of Georgia cut the ribbon for Bolton Dining Commons on Sept. 4 in a ceremony that included university students, administrators and members of John Dixon Bolton’s family.

“I can’t tell you how lucky I am to be a student here at the University of Georgia,” said senior political science major Drew Jacoby, who is president of the UGA Student Government Association. “We have top-tier academics, a highly competitive athletic program and, of course, incredible food.”

Bolton Dining Commons, located on the corner of Baxter and Lumpkin streets, is across from the Tate Student Center and Miller Learning Center and centrally located near student housing. The two-story, 56,000-square-foot building also sits near the site of what will be the Terry College of Business’ Correll Hall, which is under construction.

Bolton Dining Commons is the largest meal plan facility on the UGA campus and can seat up to 1,000 people. Open seven days a week, it is also the first to offer dinner on Sunday.

“On the day of its opening, the first day of class, we served nearly 10,000 meals at this facility,” said UGA President Jere W. Morehead. “We are keeping value foremost in our thoughts by providing this new facility and these expanded hours while holding the cost for the meal plan on campus at last year’s rates.”

Unlike many other universities that require their students living on campus to sign up for their meal plans, UGA’s is voluntary.

“Students at the University of Georgia know a good thing when they see it, and participation in our meal plan has increased by about 400 students over last year, which represents about a 5 percent increase in meal plan participation,” said Ryan Nesbit, UGA’s vice president for finance and administration. “And we believe it is because our students and their parents fully recognize and appreciate the quality and the value the UGA team provides.”

“It has just been great,” said Josephs, a senior mathematics major and student manager at Bolton. “So many students from across campus are eating here. My friends who are seniors are staying on the meal plan because of the new Bolton.”

Gresham, a third-year political science major and student supervisor at Bolton, said watching the excitement has been “delightfully overwhelming. It’s definitely been a learning experience, and I’ve enjoyed taking part in a historic moment at UGA.”

Jacoby, in his remarks to the crowd, listed a few of the many food options available in the dining commons-adding that the macaroni and cheese was arguably the best he’s ever eaten-before praising the university for its service to students.

“This place is truly amazing,” he said. “I’ve realized how much the staff, faculty and administration do for students at the University of Georgia. They work day in and day out to better the student experience, and this new Bolton is merely one example of the work you all have done for us.”

Bolton Dining Commons is named after longtime UGA treasurer and comptroller John Dixon Bolton. The facility replaces the original Bolton Dining Commons, which was completed in 1963 as part of a 1,000-student housing complex and was called Creswell Cafeteria. It was renamed soon after Bolton’s death in 1965 in honor of his 32 years of service to the university.

Bolton’s daughter Kitty Culpepper attended the ceremony along with her children and grandchildren—daughter and son-in-law Evelyn and David Dukes and son and daughter-in-law John and Katherine Culpepper and their children Hamilton and Mimi Culpepper.

“I want to thank our students for the privilege it is to serve you day in and day out and play a small but—what we hope—a very significant role in your overall student life experience here at UGA,” Nesbit said.

Bolton Dining Commons, used primarily by UGA students, is open to the public. Breakfast costs $9, lunch is $11.25, and dinner is $15.50. For more information, see http://foodservice.uga.edu/locations/bolton.

A video of the Bolton Dining Commons ceremony is available at http://vimeo.com/105279992.