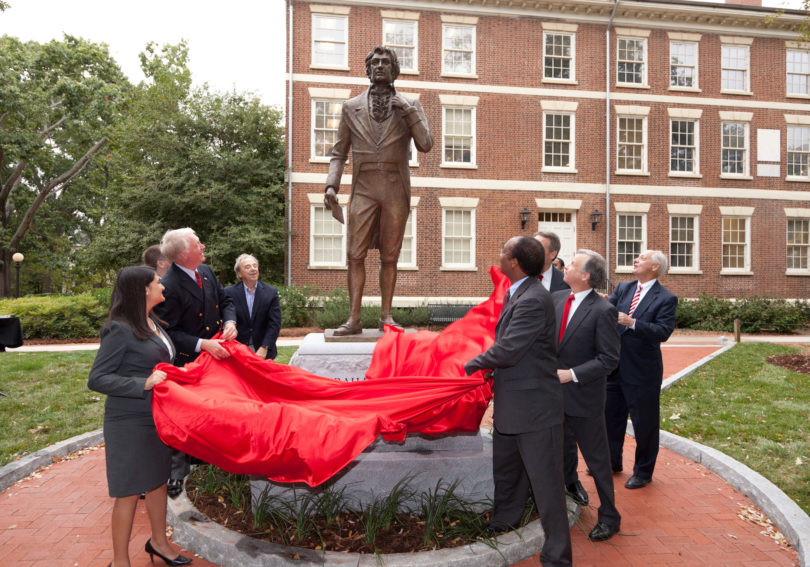 President Michael Adams and a group of alumni

Athens, Ga. – The University of Georgia dedicated a statue of Abraham Baldwin, UGA’s founder and first president, in a ceremony Sept. 16 at 10 a.m. at the statue site on the university’s North Campus. The statue is a gift from the UGA Alumni Association.

“The University of Georgia Alumni Association takes great pride in having played a role in honoring our alma mater’s founder,” said Sullivan, who was alumni president at the time the project was initiated. “The vision that Abraham Baldwin had-to make a quality post-secondary education affordable to the citizens of our state-has impacted the growth and prosperity of our region in ways few could have imagined two centuries ago.

“As graduates of the University of Georgia and beneficiaries of Baldwin’s efforts, we are honored to help recognize our founder’s vision and to reaffirm his belief that the opportunity for higher education for all Georgians is the pathway to our state’s bright future,” he added.

The sculpture’s artists were Don Haugen and his wife, Teena Stern, two of the most notable figurative sculptors working today. Their collaborations can be found in numerous public and private collections throughout the U.S.

Funding for the statue came from private donations, including a lead gift from alumnus Ted McMullen, and a $90,000 matching grant through the UGA Alumni Association.

“It is fitting that a statue in honor of our founder be a gift from the many alumni who have benefitted from his vision of 226 years ago,” said Deborah Dietzler, executive director of alumni relations. “It is heartening that so many graduates contributed to this initiative.”

The initial idea for the statue came from Loch Johnson, Regents Professor of International Affairs and Meigs Distinguished Teaching Professor. He envisioned it adjacent to Old College, because the building is a replica of the building where Baldwin studied at Yale.

“I was impressed by the Nathan Hale statue at Yale University when I was a visiting fellow there a few years ago,” said Johnson. “I thought that UGA, too, could benefit from a statue that would reflect our early history and, as the university’s first president, Abraham Baldwin struck me as an ideal subject.

“Baldwin, a member of the Georgia State House, the Continental Congress and the U.S. Senate, was a dedicated public servant. I think students, faculty and staff will be inspired by this statue as they walk through our beautiful North Campus. We may be from different backgrounds, and we study a range of disciplines, but we are all united in our devotion to public service. Who better than Abraham Baldwin to serve as a symbol of this devotion?”