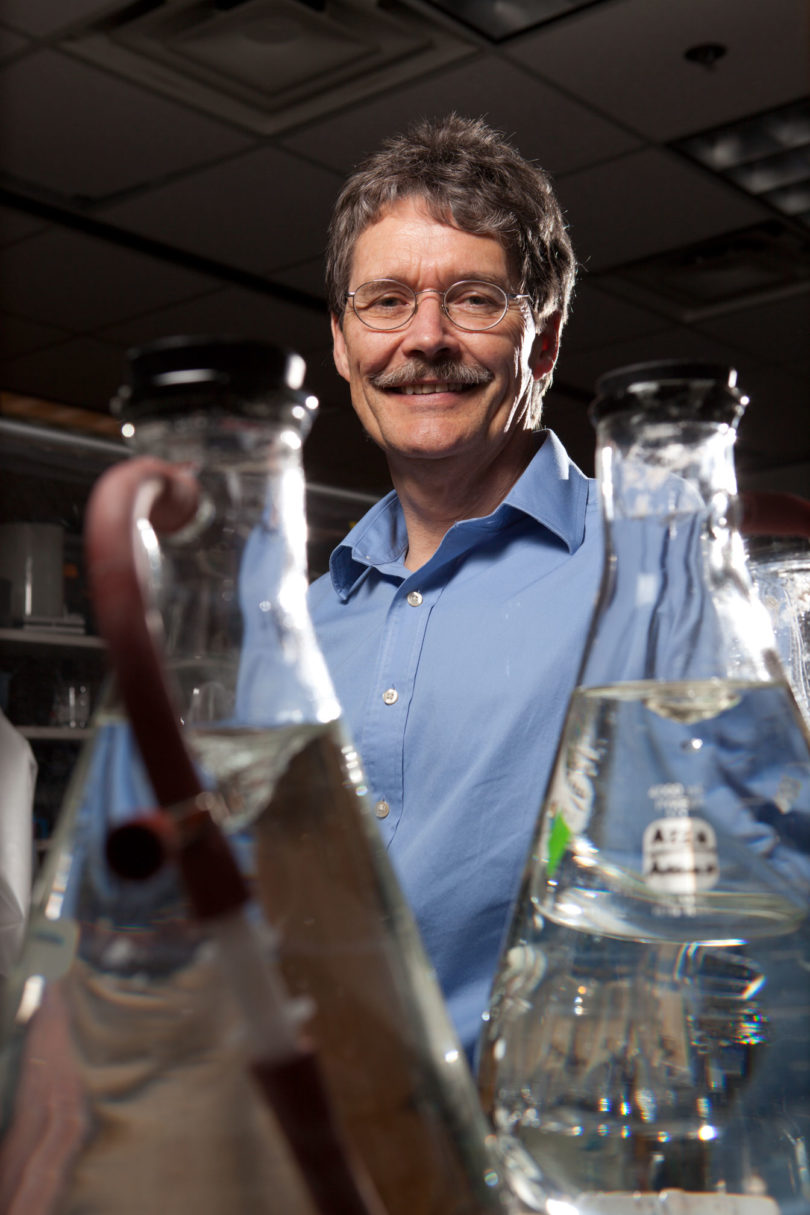 Athens, Ga. – Excess carbon dioxide in the Earth’s atmosphere created by the widespread burning of fossil fuels is the major driving force of global climate change, and researchers the world over are looking for new ways to generate power that leaves a smaller carbon footprint.

Now, researchers at the University of Georgia have found a way to transform the carbon dioxide trapped in the atmosphere into useful industrial products. Their discovery may soon lead to the creation of biofuels made directly from the carbon dioxide in the air that is responsible for trapping the sun’s rays and raising global temperatures.

“Basically, what we have done is create a microorganism that does with carbon dioxide exactly what plants do-absorb it and generate something useful,” said Michael Adams, member of UGA’s Bioenergy Systems Research Institute, Georgia Power professor of biotechnology and Distinguished Research Professor of biochemistry and molecular biology in the Franklin College of Arts and Sciences.

During the process of photosynthesis, plants use sunlight to transform water and carbon dioxide into sugars that the plants use for energy, much like humans burn calories from food.

These sugars can be fermented into fuels like ethanol, but it has proven extraordinarily difficult to efficiently extract the sugars, which are locked away inside the plant’s complex cell walls.

“What this discovery means is that we can remove plants as the middleman,” said Adams, who is co-author of the study detailing their results published March 25 in the early online edition of the Proceedings of the National Academies of Sciences. “We can take carbon dioxide directly from the atmosphere and turn it into useful products like fuels and chemicals without having to go through the inefficient process of growing plants and extracting sugars from biomass.”

The process is made possible by a unique microorganism called Pyrococcus furiosus, or “rushing fireball,” which thrives by feeding on carbohydrates in the super-heated ocean waters near geothermal vents. By manipulating the organism’s genetic material, Adams and his colleagues created a kind of P. furiosus that is capable of feeding at much lower temperatures on carbon dioxide.

The research team then used hydrogen gas to create a chemical reaction in the microorganism that incorporates carbon dioxide into 3-hydroxypropionic acid, a common industrial chemical used to make acrylics and many other products.

With other genetic manipulations of this new strain of P. furiosus, Adams and his colleagues could create a version that generates a host of other useful industrial products, including fuel, from carbon dioxide.

When the fuel created through the P. furiosus process is burned, it releases the same amount of carbon dioxide used to create it, effectively making it carbon neutral, and a much cleaner alternative to gasoline, coal and oil.

“This is an important first step that has great promise as an efficient and cost-effective method of producing fuels,” Adams said. “In the future we will refine the process and begin testing it on larger scales.”

The research was supported by the Department of Energy as part of the Electrofuels Program of the Advanced Research Projects Agency-Energy under Grant DE-AR0000081.

UGA Bioenergy Systems Research Institute
The Bioenergy Systems Research Institute at the University of Georgia supports alternative energy, fuel and materials production through the conversion of biomass. The institute encourages and facilitates research projects in bioenergy that pool UGA’s strengths in forestry, environmental science and engineering with carbohydrate science, genetics and microbiology. The institute also supports education and training of scientists as well as outreach projects designed to involve public and private stakeholders in the development of next-generation bioenergy technologies. For more information about the institute, see bioenergy.ovpr.uga.edu.