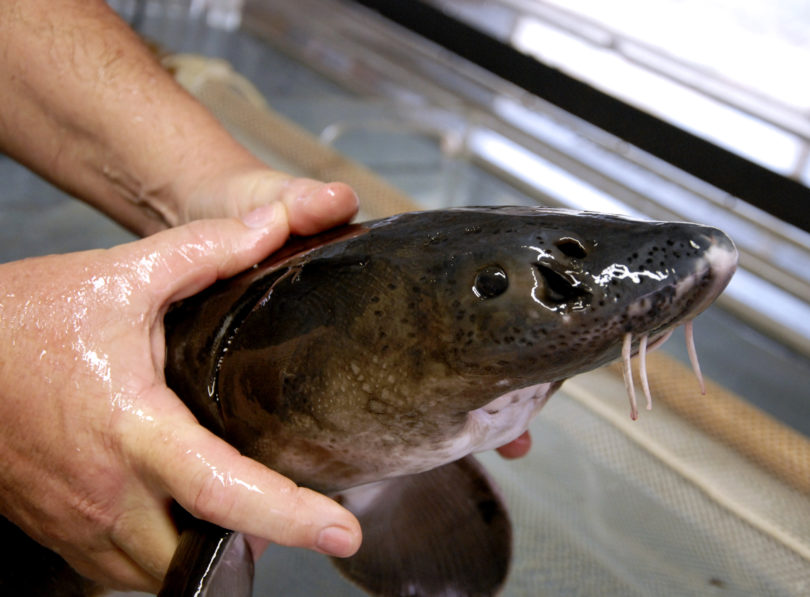 Atlanta-based Inland Seafood processed 1,900 pounds of sturgeon into fillets for the hungry

Athens, Ga. – A hundred California white sturgeon used in a University of Georgia swimming study could have been tossed in a landfill once the research project ended. But instead they’ll be feeding the poor and awing visitors to the Tennessee Aquarium.

UGA and the U.S. Fish and Wildlife Service, which funded the research, is bucking traditional disposal methods of the sturgeon used for the project by donating 1,900 pounds of the fish to the Atlanta Community Food Bank. Three of the live sturgeon that were tested for their swimming abilities were also donated to the Tennessee Aquarium and will be displayed in its River Giants exhibit.

Doug Peterson, an associate professor in the UGA Warnell School of Forestry and Natural Resources, said making sure the fish went to good use after the project ended was a priority for both UGA researchers and the U.S. Fish and Wildlife Service. Normal protocol requires that fish used in aquaculture studies be disposed of in a landfill, but Peterson said because his experiments only tested their swimming ability, the quality of the meat from the fish was completely unaffected by the research.

“We didn’t just want these sturgeon to be thrown out,” he said. “The U.S. Fish and Wildlife Service really wanted to put them to good use, and Inland Seafood was happy to help make that happen.”

The UGA-branded caviar was developed from another of Peterson’s projects at Warnell’s Cohutta Fisheries Center, which focused on creating a cost-effective and environmentally sustainable method of farming sturgeon to reduce overfishing of wild sturgeon.

Bill Demmond, chief operating officer at Inland Seafood, said the company was happy to process the sturgeon for consumption, using strict Food and Drug Administration rules. The 1,900 pounds of live sturgeon yielded about 950 pounds of high-quality sturgeon fillets, he said, and at $9.50 per pound, the total value of the donation is $9,025.

“Inland Seafood is happy to have a partnership with both the Atlanta Community Food Bank and the Warnell School of Forestry and Natural Resources,” Demmond said. “We are very pleased the sturgeon project was able to send us the fresh sturgeon so that Inland could process and fillet the fish for donation to the best food bank in the country. What the Atlanta Community Food Bank provides for those in need in the Atlanta area cannot be duplicated. Kudos to all involved.”

The Atlanta Community Food Bank distributes more than 35 million pounds of food and groceries every year to more than 600 nonprofit partner agencies that provide food assistance to families and individuals in 29 counties in metro Atlanta and north Georgia. Those partner organizations include food pantries, community kitchens, shelters and other hunger relief organizations.

“Protein is one of the most needed items here at the food bank,” he said. “Families struggling to put food on the table mostly opt for canned, nonperishable foods, which are less expensive. Being able to offer fresh fish to our nonprofit partner agencies is wonderful. We appreciate the Warnell School of Forestry and Natural Resources and Inland Seafood for providing us with this donation and helping to feed those in need.”

The Tennessee Aquarium will display the three remaining live sturgeon once they are big enough. Currently, they are only about 30 pounds each, said Jackson Andrews, aquarium director of husbandry and operations. The aquarium hopes to display them within a year in the 90,000-gallon tank in the River Giants exhibit, which features freshwater fish that grow to enormous proportions in the wild.

The sturgeon will be the first for the aquarium and will make a nice addition to their exhibit, Andrews said, which emphasizes “Disappearing Giants” and conservation of these creatures.

“White sturgeon are the largest freshwater fish in North America,” he said. “UGA’s donation will help our guests appreciate one of the remaining mega fish living in U.S. waters. Seeing them swimming next to arapaima and Australian freshwater stingrays will add another dimension to an already fascinating global collection.”

One hundred of the 35-pound sturgeons first were transported to Georgia from a private California fish farm in 2011 for Peterson’s study, which evaluated their swimming performance after the removal of a pectoral fin ray. Researchers commonly use this procedure to obtain a nonlethal bone sample that can be used to determine a fish’s age. After collecting the fin ray, researchers typically release sturgeon back into the water.

Peterson believed this fin ray removal could affect the sturgeons’ swimming abilities and, consequently, their survival. His study focused on a less invasive method that requires a small biopsy of the fin ray rather than the entire appendage. His team has been conducting swimming trials at the Cohutta Fisheries Center in northwest Georgia since 2011, using a high-tech swimming chamber that resembles a “fish racetrack” that allowed the research team to measure swimming ability at different current velocities through a calibrated viewing window, he said.

The team currently is analyzing the data, but preliminary results suggest the new fin ray biopsy method is much less invasive, has fewer negative effects on the fish’s swimming ability and that the biopsied tissue actually grows back within about six months.