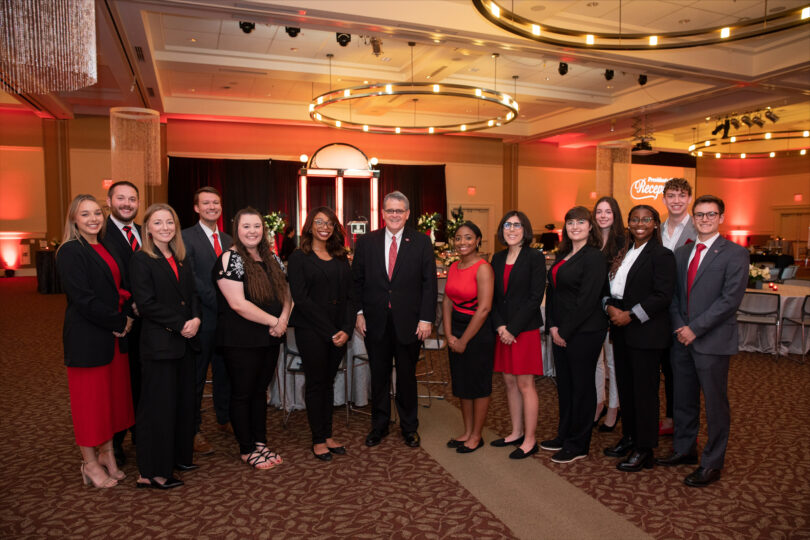 The Presidents Club reception recognized members of the giving society for their contributions to the university. (Submitted photo)

The University of Georgia Presidents Club Reception was held Oct. 7 in the Tate Student Center Grand Hall, recognizing members of the giving society for their contributions to the university. The event brought together more than 550 Presidents Club members.

“I am immensely grateful to our generous Presidents Club donors, who help the University of Georgia make great strides every day,” said UGA President Jere W. Morehead. “We are able to continue setting higher standards for our institution, in part, because of the resources our donors provide.”

The Presidents Club, whose members give $1,500 or more in a fiscal year, comprises alumni and friends whose support makes an immediate impact on UGA. More than 8,200 Presidents Club donors collectively contributed $144.3 million to UGA during the 2022 fiscal year. Their gifts support a wide variety of funds, from scholarships and facilities projects to endowed professorships and community outreach programs.

“I’m always happy to welcome Presidents Club donors to campus because when you’re here, you get a firsthand look at exactly how private giving helps students,” said Kelly Kerner, UGA’s vice president for development and alumni relations and executive director of the UGA Foundation. “Seeing that makes you realize that somewhere, right now, there’s a student out there whose life could be changed and who could change UGA through your giving. It’s powerful, and it’s the reality of what our donors do.”

Members of the Presidents Club hail from 49 states and U.S. territories and 12 countries. The median giving total among members was $30,770 for FY22. A significant number of Presidents Club members can be found in and around UGA: 451 members were current or former UGA employees in FY22.