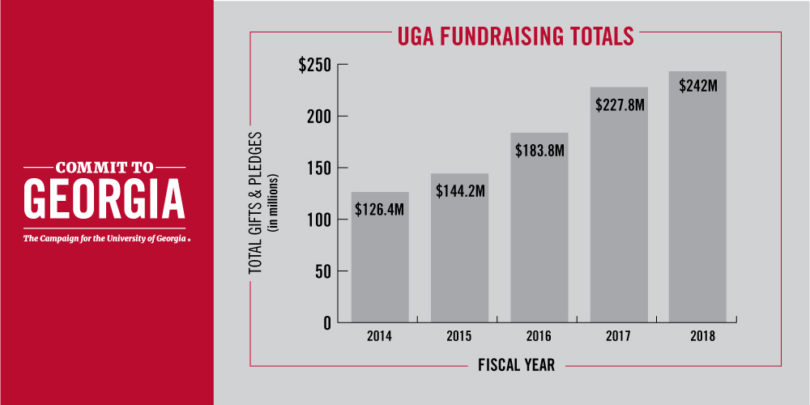 For the fifth consecutive year, UGA donors have set a record in fundraising, contributing a total of $242 million in new gifts and pledges to the Commit to Georgia Campaign. This is the second consecutive year that the total has surpassed $200 million.

“I am overwhelmed with gratitude,” said President Jere W. Morehead, “and I want to thank each and every donor who contributed to this historic achievement. They are changing lives with their generosity and loyalty to the University of Georgia, and I am deeply grateful. I also want to thank our UGA Foundation Trustees. Without their strong leadership and commitment to this institution, this level of success would not be possible. The true heroes of this great story, however, are our outstanding faculty, staff and students, who work tirelessly every day to advance the mission of UGA and expand its positive impact on the world.”

This year’s fundraising total doubles the amount raised during fiscal year 2013, the year before Morehead took office. The three-year rolling average—a figure tracked to measure sustained growth over time—has now reached $217.9 million and is nearly 90 percent higher than it was in 2013.

More than 140,000 donors have contributed to the Commit to Georgia Campaign, which has raised over $1 billion toward its ultimate goal of $1.2 billion by 2020. The priorities of the campaign are to increase scholarship support, enhance the learning environment and solve grand challenges through research and service.

“President Morehead has set some ambitious goals for this university,” said Kelly Kerner, vice president for development and alumni relations. “Through the campaign, we have uncovered the depth of need for support along with the endless potential for the University of Georgia. This campaign will raise money, but it’s really about the positive impact we can have on people.”

The impact of the campaign is reaching every part of the university from academic and student life to facilities and athletics. Through the Georgia Commitment Scholarship Program, for example, donors have established 260 need-based scholarships for students with unmet financial need. Last year, 92 of these scholarships were awarded to outstanding students, who are now pursuing their dreams of earning a degree from the birthplace of public higher education in America.

“UGA was where I wanted to pursue my education and reach my overall goals,” said Mitzi Samano Leano, recipient of the Ernesto and Jamie Perez Scholarship and the first in her family to pursue a college degree. “My scholarship is making that possible, and I couldn’t be more grateful for this opportunity.”

“Each new endowed position is an investment in the great potential of our faculty to expand the boundaries of knowledge, to answer the important questions of our time and to help improve lives and communities across this state, throughout the nation and around the world,” said Morehead.