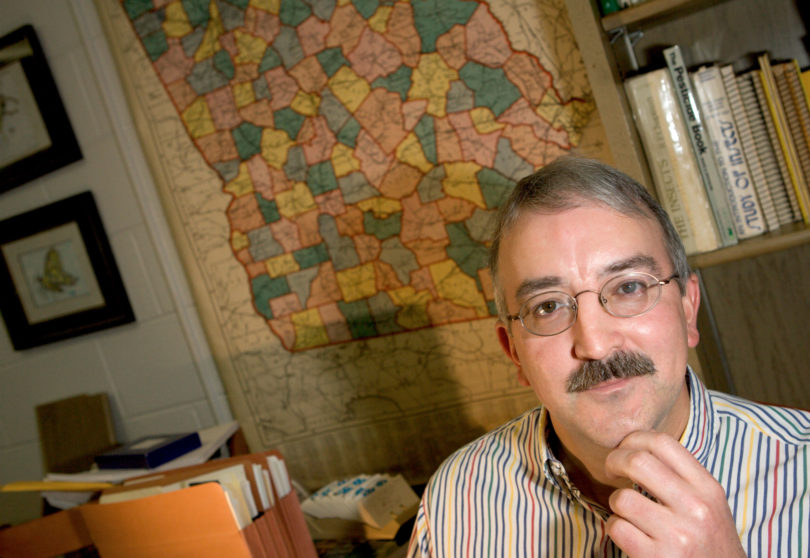 You wake up in the middle of the night and head to the kitchen for a drink. You flick on the light-and “Eeeeek! A bug!” But before you spray that bug-killer, stop. It’s safer for your environment if you whap it with a flip-flop.

The entomology professor and extension coordinator for integrated pest management and pesticide programs is working to help lessen the risk associated with pesticides in our world.

“There are two big areas of risk associated with pesticides: human risk and environmental risk,” Guillebeau says. “Most people are at the greatest risk when they apply or store pesticides around their home.”

He compares using pesticides to taking over-the-counter or prescription medications: if you don’t use them according to your doctor’s recommendations, they can cause more harm than good.

Guillebeau co-teaches classes in turf management and pesticide/biotechnology utilization for pest management. But his work reaches students long before they reach UGA. One area of focus for Guillebeau’s work is lowering pesticide risks in schools.

“There has always been additional concern about children being exposed to pesticides,” he says. “Since students and teachers spend so much time in schools and schools are so much more airtight than they’ve ever been, it creates a potential problem.”

He’s not suggesting that school pests go unchecked, though. “Uncontrolled pests are unacceptable in the school, too. IPM helps control pests with a measured application of pesticides.”

As part of the ongoing school project, Guillebeau has received a new IPM grant from the U.S. Environmental Protection Agency targeted at lower-income and minority schools.

He and his colleagues strive to reach as many people as possible through a two-pronged approach. First: Teach people non-chemical strategies to use the least pesticide possible to manage pests. And second: Help people understand how to use pesticides correctly when they’re necessary.

The information is available through UGA extension offices, publications and Web sites. They have an ongoing partnership with public libraries, too, to introduce people to integrated pest management and help them understand how to apply IPM principles.

Sometimes a pest isn’t the root of the problem.

“We get a lot of odd questions in entomology,” Guillebeau says. “Some of the most difficult are from people with delusory parasitosis-they think they have an insect problem, but they don’t. These situations have to be handled carefully to help the person get the help they need without offending them.”

Not everyone is born to be a bug man. But when Guillebeau was a sophomore at UGA, he knew he wanted to be an entomologist.

“I had always been interested in life science and wanted to become a scientist,” he says. “When my adviser pointed out how small the field of marine biology could be, I switched to entomology.”

After graduation, Guillebeau worked for the U.S. EPA in Washington, D.C., in the Office of Pesticide Programs. There, he helped balance the risks and benefits of pesticides.

He continues his quest for a safer environment through his work, his research and his involvement in the Entomological Society of America. Guillebeau believes it’s all about education and understanding the risks.

“Through IPM education and outreach, we can manage pests and minimize the human and environmental risks of pesticides,” he says.