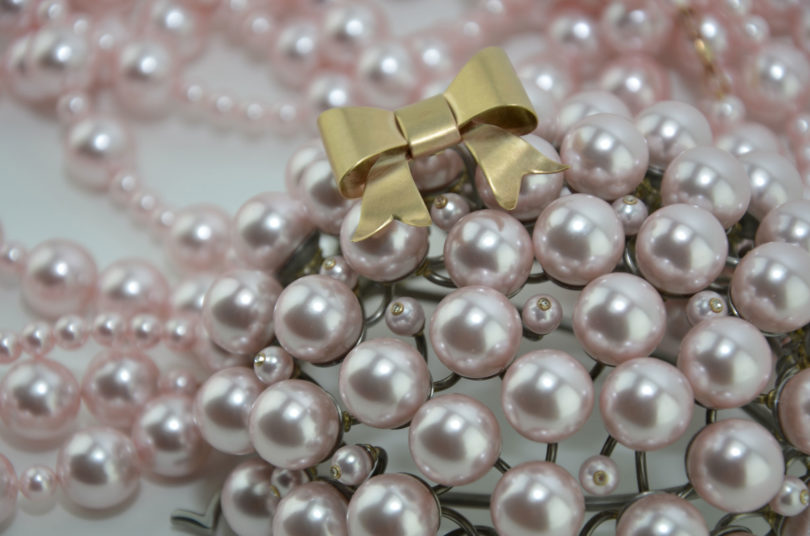 Bubblepearls is a piece by Lola Brooks

Athens, Ga. – The University of Georgia Lamar Dodd School of Art will present an exhibition by Lola Brooks—an artist, metalsmith, jeweler and 2012-2013 Dodd Professorial Chair—Feb. 1 through March 5 in Gallery 307. The opening reception on Feb. 1 at 7 p.m. is free and open to the public.

An adjunct professor at the Rhode Island School of Design since 2007, Brooks is an artist whose work is in many collections around the country, including the Metropolitan Museum of Art in New York City. Beginning in fall 2012, Brooks traded her New York apartment for a house and studio on the outskirts of Athens. Her Dodd Chair Exhibition will showcase work she has created while at UGA.

The exhibition will include five to seven pieces installed alongside objects from the artist’s many collections, including some 1/4 inch-scale furniture, all designed to shift the viewer’s perception of scale and meaning.

“This is an opportunity to explore some ideas about shifting meaning through perception of scale and context using display,” Brooks said, “and is probably partially a result of the psychological and physical space that opened for me by moving here.

“I make large, outsized jewelry to begin with, but I’m interested how the pieces become a little more heroic or ridiculous on these diminutively scaled antique salesman samples.”

The Lamar Dodd Professorial Chair is appointed annually, established to honor Lamar Dodd, the first chair of what was then the UGA art department. During a term, the holder of the chair is bestowed the rank of full professor at the university level.

The appointment is given to an outstanding visual artist who has demonstrated a commitment to teaching in the studio or classroom. During her time at UGA, Brooks has worked with students from a variety of majors in the school of art.

“I have really enjoyed working with students from other disciplines,” Brooks said. “My work relies heavily on materials for content and meaning as well as the history of jewelry and the history of making things by hand. With the students, we spent the fall semester in conversation about how we value our work as artists and what that means in this cultural moment as well as the role of appropriation in contemporary art. It’s been a very rewarding experience for me and, I hope, for the students and the school.”

For more information on the Lamar Dodd School of Art, see http://art.uga.edu.