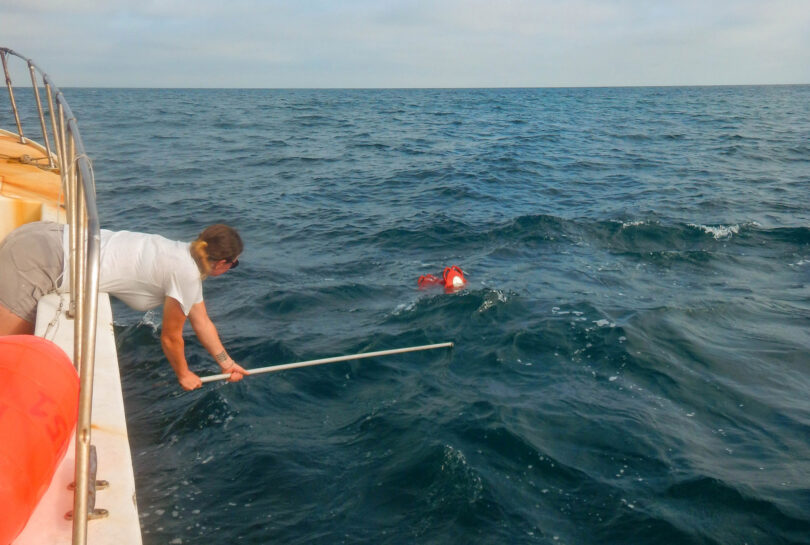 The University of Georgia Marine Extension and Georgia Sea Grant are working with commercial fishermen to test advanced gear that could expand their catch and protect endangered North Atlantic right whales, like the one found dead off the coast of South Carolina recently.

Ropeless fishing gear would allow boats easier access to black sea bass, which are caught using pots that are lowered to the ocean floor with vertical fishing lines connected to floats that sit on top of the water. Fishermen set those pots for a period of time, and black sea bass swim into them and can’t get out. The pots and lines are retrieved at the end of each trip. 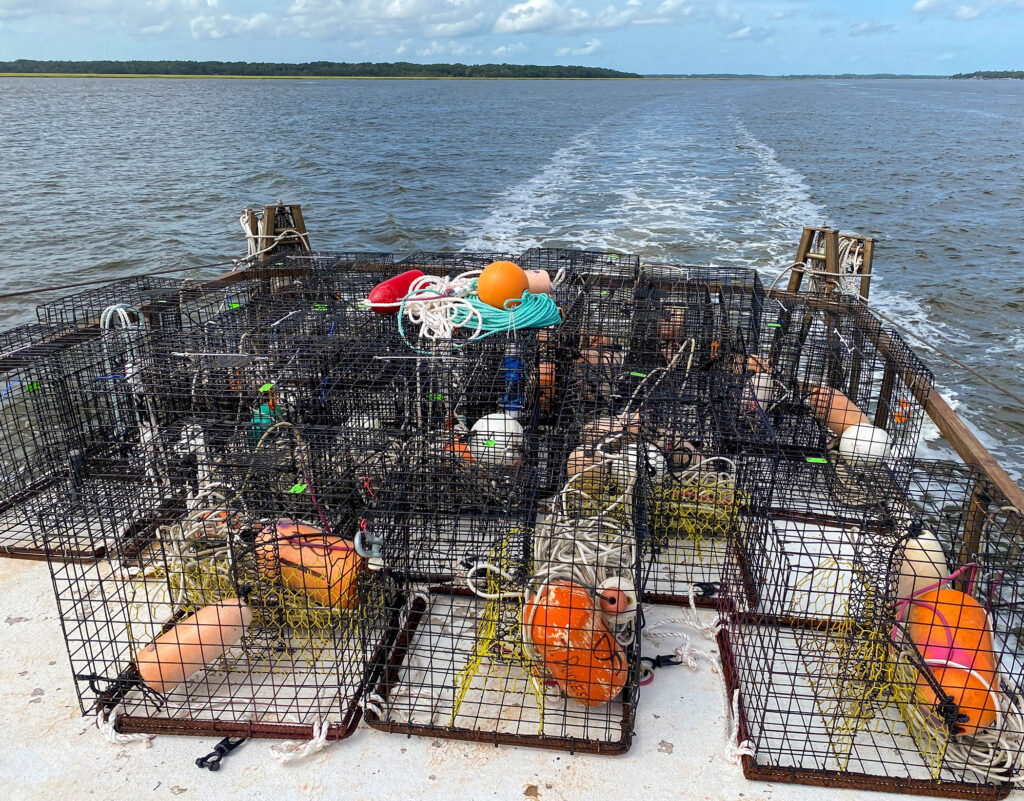 Currently, during colder months off the southeast Atlantic coast, fishing boats have to go about 30 miles offshore to set their pots so that they won’t ensnare the right whales that migrate south during the winter to calve. That makes the trip more expensive and more dangerous for the fishers.

But setting pots closer to shore is a critical hazard to the right whales. The whale that was found dead off the coast of Myrtle Beach, S.C., on Sunday had been spotted near Nantucket, Massachusetts, in October with fishing line extended from its mouth. Nicknamed Cottontail, the whale was spotted in February near Florida where disentanglement experts tried unsuccessfully to free him from the ropes.

Since 2017, 34 right whales have died from entanglement in fishing gear or being struck by a boat.

“The use of ropeless gear could potentially remove nearly all entanglement risks to the whales and other marine animals,” said Bryan Fluech, associate director of extension at UGA Marine Extension and Georgia Sea Grant. 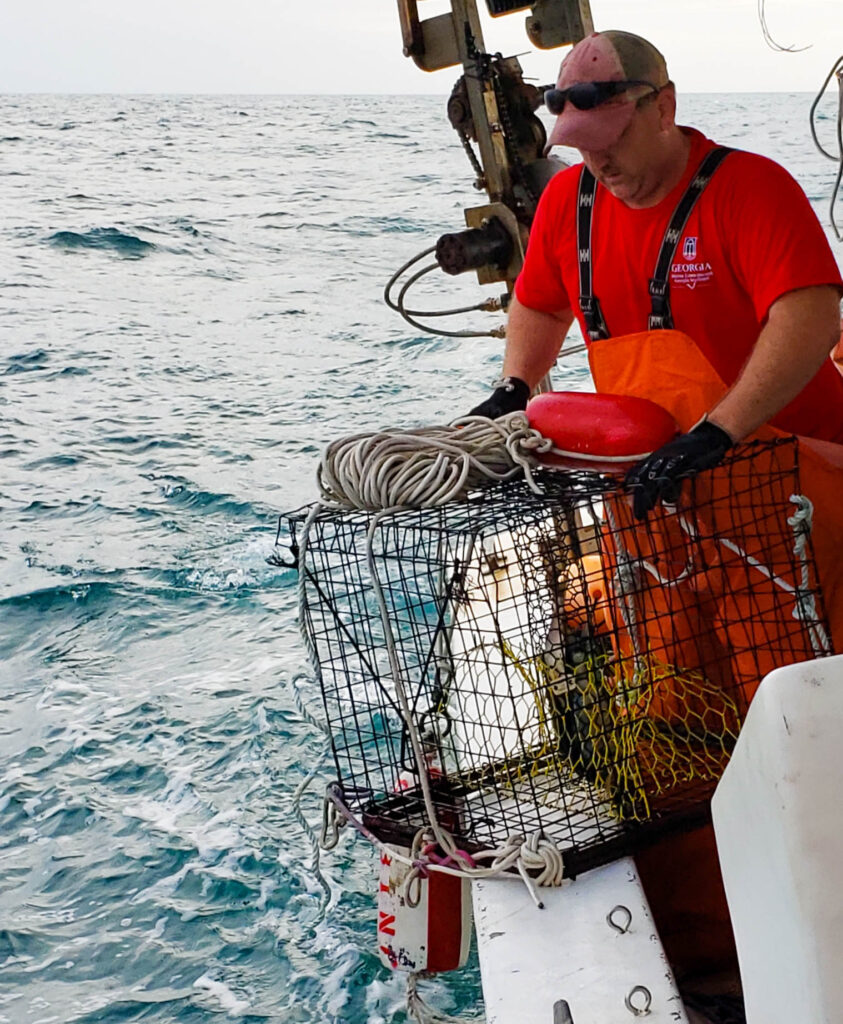 From New England to Florida, researchers and fishermen are exploring ways to adapt their gear to spare the right whales. The National Oceanic and Atmospheric Administration fisheries estimates that 85 percent of right whales have become entangled in fishing gear at least once. NOAA has identified two areas critical for right whales: off the coast of New England, where the whales forage for food in warmer months; and off the southeast coast from North Carolina to Florida, where the whales reproduce between November and April.

Fluech is collaborating with Kim Sawicki, project lead and doctoral student at the University of Massachusetts, Dartmouth. Sawicki serves as the president of Sustainable Seas Technology Inc., a nonprofit dedicated to promoting the use of innovation and technology in the safe and sustainable harvest of seafood.

In summer 2020, the research team secured a permit from the National Marine Fisheries Service to test eight different ropeless gear systems with black sea bass pots off the coast of Georgia. It was the first time the ropeless gear had been tested in the South Atlantic.

“It’s nice to know that for this area, we’re really on the front end of this,” Fluech said.

Each gear type is rigged, deployed and retrieved in a different way. Some devices use lines stored on spools or in bags or traps that sit on the ocean floor. Others have inflatable lift bags or buoys that float the pots to the surface. The devices are triggered by acoustic technology or timers that activate their release.

Fishermen use fishery-specific GPS software to locate the pots from above water.

“Normally you would just have a line and buoy in the water 24-7, but what we have to do is purposely tell these devices when to release the line and buoy and then we simply drive up to it, and keep fishing as normal,” Sawicki said.

Retrieving the gear takes less than two minutes and the fishing vessels stay within 20-30 feet of the line and traps during the retrieval process, leaving little opportunity for the whales to become entangled, a problem that has nearly eliminated the right whale. Only about 360 remain in existence in the wild, according to the NOAA.

Fluech and Sawicki tested the devices alongside local fishermen, who provided boats and crew for the field experiments. This relationship has been the key to determining the practicality of the gear.

“Is it time effective? How long will it take for the average fisher to learn to use these gears?” Sawicki asked. “We wanted to look at all of the issues surrounding the use of this gear through this very particular fishery.”

Throughout the testing period, the research team leaned on commercial fishermen for their institutional knowledge and feedback. 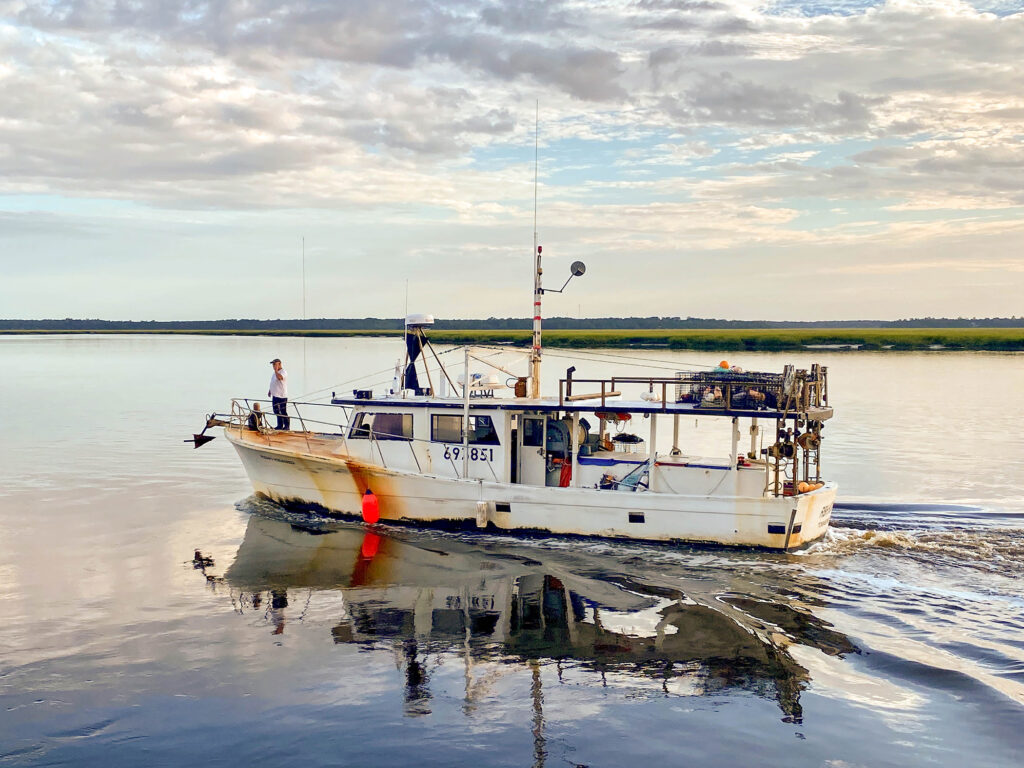 “The project, it holds merit in my eyes,” said Bill Nutt, a fisherman from Deland, Florida, who recently got back into commercial fishing after a 20-year hiatus. Nutt volunteered his time for the project, working as a mate on one of the fishing vessels the team used to conduct field studies.

“You definitely don’t want to endanger the whales, but you’ve got to make a living, so the devices have to be cost effective,” he says. “If there’s something you can do, you should do it.”

Next steps for the project team include reporting their findings to NOAA Fisheries and the South Atlantic Fishery Management Council early this year, and hopefully obtaining funds for additional trials and research.

“We hope this pilot study will serve as a catalyst for more formalized research into the application of this gear as an approved gear that would ultimately allow these fishermen to fish in areas that are currently restricted,” Fluech said. “At the end of the day if we can show that this gear is efficient and these guys can still catch fish and protect the whales, that might be incentive to grow the fishery and still meet conservation goals.”